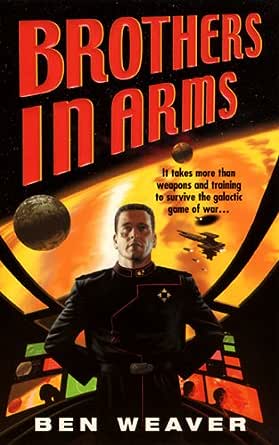 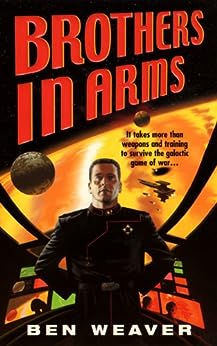 Ben Weaver is a military scholar who spent years conceiving, researching, and writing Brothers In Arms.

3.3 out of 5 stars
3.3 out of 5
33 customer ratings
How does Amazon calculate star ratings?
Amazon calculates a product’s star ratings based on a machine learned model instead of a raw data average. The model takes into account factors including the age of a rating, whether the ratings are from verified purchasers, and factors that establish reviewer trustworthiness.
Top Reviews

Sailoil
3.0 out of 5 stars Great story, too big for such a tight book.
Reviewed in the United States on August 27, 2001
Format: Mass Market PaperbackVerified Purchase
Brothers in Arms falls into the category of Military Sci-Fi. In the tradition of these novels it is short, punchy, heavy on technology and light on plot or characterisation. It draws heavily on books such as Haldeman's "Forever War" and Steakleys "Armour". For me I think it lacks the punch that Forever War displays, but is better written than either of the above books. The standard genre elements such as the basic military setting, the hard cadet training and the soldier being thrown into war at the deep end are all fleshed out by other elements. There is the Alliance/Colony power struggle which erupts into Civil War, so that the cadets are pitted against each other rather than some faceless enemy. There is a racist undertone of being a colonist, and the worse stigma of being a genetic freak. There is the poorly understood technology of a disappeared race, and what exactly it does to you. Because Weaver has actually done his research and constructed a plausible galaxy for us, there are enticing visions of worlds and ideas that lie outside the story. Weaver is obviously keeping back a larger picture and letting us see only a glimpse of this world. This may be a prelude to a series of books, or it may merely be good technical writing skill. I have not given Brothers in Arms a great rating because I think the book fails in a number of its key objectives. Weaver wanted to show us the transmogrification of his central character from uncertain idealistic boy to a pragmatic and confident officer. In this he fails. The character at the end seems to me no different from the one at the beginning. I felt the characterisation of Halitov (the sidekick) was better managed and the layers beneath him were explored better. Also, there are issues in the book that needed better development, such as the political ramifications of the split between colonies and alliance etc. I suppose it is a feature of Mil/Sci/Fi that you get only the grunts view of the world. I like to see things on a broader canvas and for that reason I find the genre unsatisfying. I think Weaver had the makings of a great speculative fiction novel here but that he harnessed it to the wrong genre, a bit like hitching a racehorse to a cart. If you have got to the bottom of this review you will probably feel much the same as me about the book. Those who lost interest in my review in the first paragraph will probably get a kick out of it. Plenty of bang bang flash and guts falling out.
Read more
3 people found this helpful
Helpful
Comment Report abuse

Amaxon Customer
2.0 out of 5 stars How do I keep the plotlines straight?
Reviewed in the United States on May 8, 2013
Format: Mass Market PaperbackVerified Purchase
Okay. So Scott is a son of a colonist, who wangled a slot at the academy of the Terran Guard Corps, and it is on a planet with ancient installations. -of an advanced culture. -which bequeaths incredible mind conditioning to the humans. Not without some danger. -so Scott is wary of this conditioning. But mainly, he is a first-year cadet surviving the typical study and hazing.
Then at page 98, the colonies are in revolt against Terra and the cadets are asked to choose sides (reminiscent of the U.S. Civil War). They go for early conditioning, but something interrupts it and cadets die. But he lives. Rumors of the war arrive. So much news that it is hard to keep track- even after 3 tries, it is not clear to me who massacred whom. The author should have separated the subjects into separate novels; it is just too much.
Yes, he must dodge attackers, by using some fancy mental manipulation of the real world (he imitates a comic book hero). Then he .................. darn, you would not believe what happens next.

Sean Gangol
5.0 out of 5 stars An Underrated Sci-fi Saga
Reviewed in the United States on November 20, 2019
Format: Kindle EditionVerified Purchase
I was actually glad to have discovered this series after finding the second installment at a used bookstore in San Antonio. It's always nice to find an underrated gem about the triumphs and tragedies of war. It also shows us that no conflict is black and white.
Read more
Helpful
Comment Report abuse

Mark E. Cooper
4.0 out of 5 stars A conflict of loyalties
Reviewed in the United States on November 6, 2003
Format: Mass Market Paperback
Scott St. Andrew is a cadet in the elite South Point Military Academy where he is training to become an officer in the Seven Systems Guard Corps. Scott and his brother Jarrett entered the academy to escape the mines on their home colony of Gatewood-Callista, but Scott is a gennyboy (someone with a genetic defect) and is considered unworthy to be there by many of the other cadets.
When war breaks out between the Earth Alliances and the colonies, choices have to be made, but Scott believes whole heartedly in the Code and does not want to break it even to support the colony that is his homeworld. Circumstances overtake him however, and he is forced to undergo the Racinian conditioning three years ahead of schedule so that he can fight in the war.
When Exeter is invaded and the academy taken, Scott and a number of other cadets make a break for it. In the process, many of them are killed but Scott, Paul, Halitov and others steal a ship and escape. Upon landing at a base on a far colony, Scott is summarily promoted to 2nd lieutenant and thrown into the deep. He is given troops and a mission to perform, which he does despite a mutiny. Then he is promoted again! Scott is bewildered. One year on from joining the academy, he is a captain and leading men into battle despite his fears and insecurities.
This is an action packed and fast paced book. A little too fast in my opinion. From cadet to captain in less than a year? The book felt very rushed... good, but rushed. This one has more action within its pages than perhaps three normal books and the promotion thing stretches believability too far.
If you can ignore the tempo of promotions, which you can if you like mil sci-fi as much as I do, you will fing this one well worth buying. :¬)