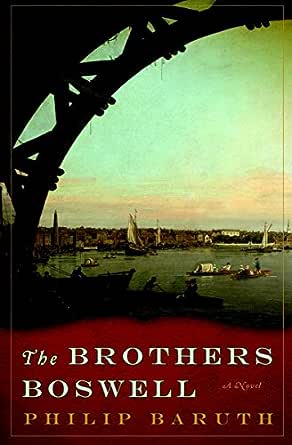 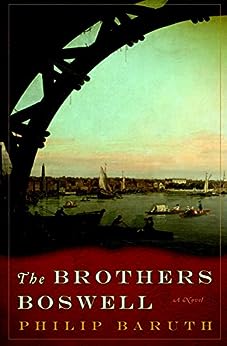 Starred Review. Baruth (The X-President) shows his versatility with this chilling literary thriller. In 1763 London, John Boswell, the resentful younger brother of Samuel Johnson's future biographer, is stalking Boswell and Johnson, who have recently become friends. John bribes the boatmen who ferry his quarry on the Thames for the smallest details of their conversations. As he remembers the past, John reveals a personal link with the great lexicographer, with whom he once shared a brief, close relationship. Despite the inherent lack of suspense about the outcome of John's murderous quest, the subtle way the author examines his character's twisted mind draws the reader in, as does the evocative prose, as illustrated, for example, in a passage describing St. James's Park at night (the vast empty dirt-packed space... takes on a dull luminosity, picks up the leavings of the moon and gives back a quarter-light, just enough to perceive the outline of figures moving at one slowly from the trees). (May)
Copyright © Reed Business Information, a division of Reed Elsevier Inc. All rights reserved. --This text refers to an alternate kindle_edition edition.

From The Washington Post's Book World/washingtonpost.com Reviewed by Patrick Anderson Six years ago, Philip Baruth published his delightful first novel, "The X President," which presented Bill Clinton at three moments in his life: in 1963 (at age 16), when he shook President Kennedy's hand on a trip to Washington; as president in 1995; and in 2055, at age 109, when he is still working on his memoirs at his presidential library in Little Rock. The plot involves a historian who, via the miracle of time travel, returns to 1963 to persuade the young Clinton to take actions that will keep the United States from losing World War III. It's an ingenious concept, beautifully executed, and I wondered what Baruth, who teaches at the University of Vermont and is a commentator on Vermont Public Radio, might do for an encore. Well, he hasn't let us down. His second novel, while entirely different from "The X President" in substance, is just as inventive, carrying us from the American political world back to the London literary world of the 1760s. It's called "The Brothers Boswell," and the title characters are James Boswell, the celebrated biographer of Dr. Samuel Johnson, and his younger brother, John Boswell, who is insane and sets out to abduct and possibly kill both his brother and Johnson. To his troubled mind, the two of them have grievously insulted him by excluding him from their budding friendship. The novel opens on Saturday, July 30, 1763, when the 22-year-old James Boswell and Dr. Johnson -- as Boswell notes in his journal -- "took a boat and sailed down the silver Thames" to Greenwich, unaware that John is following them. The novel alternates between his pursuit and eventual abduction of the two men that day and flashbacks to the lives of the Boswell brothers. The ambitious James has at that point known the great literary scholar for only two months but already has charmed and flattered his way into friendship. He and John, three years younger, grew up in Edinburgh, the sons of a prominent judge, and as boys had admired, even worshiped Johnson from afar. Although their father scorned Johnson for scorning Scotland, the boys treated Johnson's Dictionary as their "common secular bible." They devised a dictionary game, in which they used words they'd learned there to insult each other: nidget, nithing, neezer and ninnyhammer, to cite only a few of the "N" words. As adults, both brothers have a gift for words, the insane one (who narrates most of the novel) as well as the one who becomes a celebrated writer. Here is John on his home town: "Edinburgh is a lunatic, strapped down tight to a stony crag, endlessly fouling its own sheets." Here he first confronts Johnson: "It is he, and no doubt: the large, pointed, shrewd nose, the brooding lips, and dark, arching brows over eyes that look bruised with fatigue. A gargoyle's features, fleshy, piercing, mutton-fed. Eyes that have been strained over a book until they are a sad, cloudy brown." Throughout the novel, John (or, if you will, his perfectly sane creator) gives a picture of 18th-century London as vivid and often hellish as any I've seen. It's interesting to imagine how Baruth came to write this novel. Presumably, he started with an interest in the relationship between James Boswell and Samuel Johnson, who were so different in age, background and temperament. The conventional approach would have been to focus directly on them and the literary world they inhabited. But somewhere along the way he learned that James had a younger brother and that insanity ran in the family. And that led to the rather startling idea of the mad brother who wanted to kill the two great literary men. At that point, the author made the leap from a literary novel to that increasingly popular genre, the literary thriller. And, quite possibly -- and with due respect for Baruth's formidable talent -- from a relatively dull tale of book-world vanities and rivalries to an exciting, suspenseful story of two literary men menaced by a madman. Make no mistake, this is a thriller, however literary. When John finally has his brother and Johnson in his grasp -- spitting out threats, demanding apologies and wielding two golden pistols -- the reader, even if he strongly suspects that both men lived well past 1763, is caught up in the passion and terror of the moment. One of the novel's several wonders is that the mad brother is just as compelling a character as his soon-to-be-immortal sibling. If you're interested in Boswell and Johnson, or in 18th-century England, or in brilliant storytelling, "The Brothers Boswell" is not to be missed. And if you enjoy it, you might want to seek out "The X President," because it's great fun, too.
Copyright 2009, The Washington Post. All Rights Reserved. --This text refers to an alternate kindle_edition edition.

“An exciting, suspenseful story. . . . Not to be missed.”—The Washington Post

“It is a beautifully written novel, with the flavor of a literary work.”—Star Tribune (Minneapolis) --This text refers to an alternate kindle_edition edition.

Philip Baruth is a novelist and an award-winning commentator for Vermont Public Radio. His previous novel, The X President, was a New York Times Notable Book. He teaches at the University of Vermont in Burlington. --This text refers to an alternate kindle_edition edition.
Read more