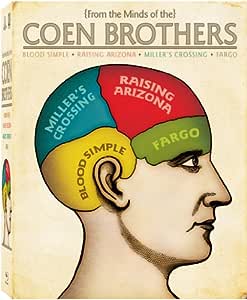 Blood Simple Blu-ray
From the celebrated filmmaking team of Joel Coen and Ethan Coen (Fargo, Raising Arizona), comes this visually stunning tale of a double-cross—and murder—in a small town. When the owner of a backwoods bar hires a man to kill his cheating wife and her boyfriend, he opens a door into the criminal world that he’ll never be able to shut. Blood Simple hurtles forward with the speed and intensity of a fired bullet...and delivers as devastating an impact as has ever been felt from a noir film!

Fargo Blu-ray
Nominated for seven Oscars® and winner of two, this darkly amusing thriller combines a first-rate cast, "a dazzling mix of mirth and malice" (Rolling Stone) and a bizarre kidnapping plot that unravels the Midwest like never before. Starring Frances McDormand, William H. Macy and Steve Buscemi, Fargo is a brilliant tour de force from the creators of Raising Arizona and O Brother, Where Art Thou?

Leo (Albert Finney), a likeable Irish gangster boss, rules an Eastern city along with Tom (Gabriel Byrne), his trusted lieutenant and counselor. But just as their authority is challenged by an Italian underboss (Jon Polito) and his ruthless henchman (J.E. Freeman), Leo and Tom also fall for the same woman (Marcia Gay Harden). Tom, caught in the jaws of a gangland power struggle, walks a deadly tightrope as he tries to control and manipulate its violent outcome.

Once he decides to give up crime, a small-time robber (Cage) proposes to a pretty cop (Hunter). But when the newlyweds learn they can’t conceive a baby, they decide to steal one from a couple who seem to have one to spare – since they just had quintuplets! With its outrageous plot, fast-paced action and even some wild pyrotechnics, Raising Arizona will forever have a place in the hearts of lovers – and film lovers – everywhere.

Review for Blood Simple
The debut film of director Joel Coen and his brother-producer Ethan Coen, 1983's Blood Simple is grisly comic noir that marries the feverish toughness of pulp thrillers with the ghoulishness of even pulpier horror. (Imagine the novels of Jim Thompson somehow fused with the comic tabloid Weird Tales, and you get the idea.) The story concerns a Texas bar owner (Dan Hedaya) who hires a seedy private detective (M. Emmett Walsh) to follow his cheating wife (Frances McDormand in her first film appearance), and then kill her and her lover (John Getz). The gumshoe turns the tables on his client, and suddenly a bad situation gets much, much worse, with some violent goings-on that are as elemental as they are shocking. (A scene in which a character who has been buried alive suddenly emerges from his own grave instantly becomes an archetypal nightmare.) Shot by Barry Sonnenfeld before he became an A-list director in Hollywood, Blood Simple established the hyperreal look and feel of the Coens' productions (undoubtedly inspired a bit by filmmaker Sam Raimi, whose The Evil Dead had just been coedited by Joel). Sections of the film have proved to be an endurance test for art-house movie fans, particularly an extended climax that involves one shock after another but ends with a laugh at the absurdity of criminal ambition. This is definitely one of the triumphs of the 1980s and the American independent film scene in general. --Tom Keogh

Review for Fargo
Leave it to the wildly inventive Coen brothers (Joel directs, Ethan produces, they both write) to concoct a fiendishly clever kidnap caper that's simultaneously a comedy of errors, a Midwestern satire, a taut suspense thriller, and a violent tale of criminal misfortune. It all begins when a hapless car salesman (played to perfection by William H. Macy) ineptly orchestrates the kidnapping of his own wife. The plan goes horribly awry in the hands of bumbling bad guys Steve Buscemi and Peter Stormare (one of them being described by a local girl as "kinda funny lookin'" and "not circumcised"), and the pregnant sheriff of Brainerd, Minnesota, (played exquisitely by Frances McDormand in an Oscar-winning role) is suddenly faced with a case of multiple murders. Her investigation is laced with offbeat observations about life in the rural hinterland of Minnesota and North Dakota, and Fargo embraces its local yokels with affectionate humor. At times shocking and hilarious, Fargo is utterly unique and distinctly American, bearing the unmistakable stamp of its inspired creators. --Jeff Shannon

Review for Miller's Crossing
Arguably the best film by Joel and Ethan Coen, the 1990 Miller's Crossing stars Gabriel Byrne as Tom, a loyal lieutenant of a crime boss named Leo (Albert Finney) who is in a Prohibition-era turf war with his major rival, Johnny Caspar (Jon Polito). A man of principle, Tom nevertheless is romantically involved with Leo's lover (Marcia Gay Harden), whose screwy brother (John Turturro) escapes a hit ordered by Caspar only to become Tom's problem. Making matters worse, Tom has outstanding gambling debts he can't pay, which keeps him in regular touch with a punishing enforcer. With all the energy the Coens put into their films, and all their focused appreciation of genre conventions and rules, and all their efforts to turn their movies into ironic appreciations of archetypes in American fiction, they never got their formula so right as with Miller's Crossing. With its Hammett-like dialogue and Byzantine plot and moral chaos mitigated by one hero's personal code, the film so transcends its self-scrutiny as a retro-crime thriller that it is a deserved classic in its own right. --Tom Keogh

Review for Raising Arizona
Blood Simple made it clear that the cinematically precocious Coen brothers (writer-director Joel and writer-producer Ethan) were gifted filmmakers to watch out for. But it was the outrageously farcical Raising Arizona that announced the Coens' darkly comedic audacity to the world. It wasn't widely seen when released in 1987, but its modest audience was vocally supportive, and this hyperactive comedy has since developed a large and loyal following. It's the story of "Ed" (for Edwina, played by Holly Hunter), a policewoman who falls in love with "Hi" (for H.I. McDonnough, played by Nicolas Cage) while she's taking his mug shots. She's infertile and he's a habitual robber of convenience stores, and their folksy marital bliss depends on settling down with a rug rat. Unable to conceive, they kidnap one of the newsworthy quintuplets born to an unpainted-furniture huckster named Nathan Arizona (Trey Wilson), who quickly hires a Harley-riding mercenary (Randall "Tex" Cobb) to track the baby's whereabouts. What follows is a full-throttle comedy that defies description, fueled by the Coens' lyrical redneck dialogue, the manic camerawork of future director Barry Sonnenfeld, and some of the most inventively comedic chase scenes ever filmed. Some will dismiss the comedy for being recklessly over-the-top; others will love it for its clever mix of slapstick action, surreal fantasy, and homespun family values. One thing's for sure--this is a Coen movie from start to finish, and that makes it undeniably unique. --Jeff Shannon