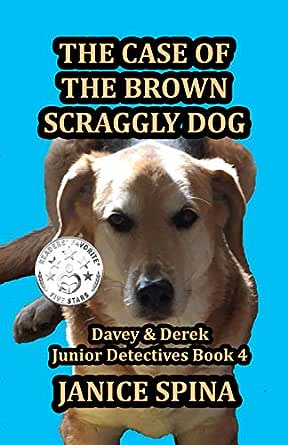 You've subscribed to Davey & Derek Junior Detectives! We will preorder your items within 24 hours of when they become available. When new books are released, we'll charge your default payment method for the lowest price available during the pre-order period.
Update your device or payment method, cancel individual pre-orders or your subscription at
Your Memberships & Subscriptions
There was an error. We were unable to process your subscription due to an error. Please refresh and try again. 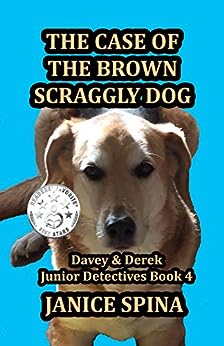 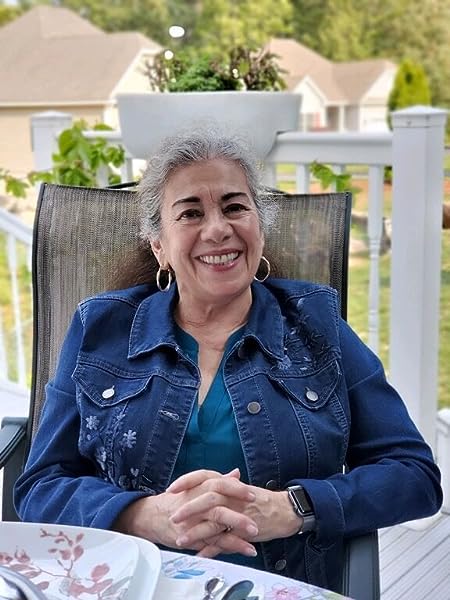 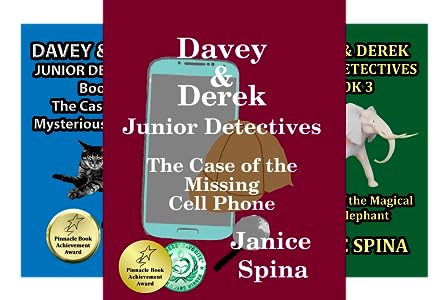 Janice Spina has a knack for writing mysteries. Her recent addition to the Davey and Derek Junior Detectives Series, The Case of the Brown Scraggly Dog, is another good twist on what might appear to be a simple mystery. Like the ever popular young boys' mystery series, the Hardy Boys, Davey and Derek, the two protagonists, make a great team of amateur sleuths. The basic plot of a boy team working together solving the mystery develops simply, mixed in with a little bit of magic, a little bit of boyish fun and a little bit of humor. The reader can't help but like and even relate to these active youngsters whose minds never stop working. The plot is developed primarily through dialogue, which makes this a good story for an early chapter book reader. There's nothing better to encourage the reluctant young boy reader than a Hardy Boys-like series mixed with a little bit of magic and a whole lot of fun.
------------------------------------------------------------------------------------THE CASE OF THE BROWN SCRAGGLY DOG (DAVEY & DEREK JUNIOR DETECTIVES SERIES BOOK 4) BY JANICE SPINA★★★★★  The Case of the Brown Scraggly Dog is the fourth entry in Janice Spina's middle-grade series about twin detectives Derek and Davey Donato. The two boys share a gift for magical powers and a bond that allows them to communicate mind-to-mind, which they've termed 'TT' or 'twin telepathy.' Still fledgling warlocks, Davey and Derek receive training from their Aunt Gigi, who is herself an experienced magic-user. One day during training the trio encounters a startled stray dog, and they immediately launch an investigation into the dog's owner and condition. The group also receives help from the spirit of a cat named Mianna, who lives inside Aunt Gigi's crystal ball, and their friend Mickey "Cat" Catonni. With such a dynamic team working earnestly to help a lost dog find its owner, it's just a matter of time before the case is solved. But what discoveries will solving this mystery bring?
This is a sweet, classically entertaining story about two charming boys, as well as their quirky group of friends and family. Over the course of the series, Spina has built up a collection of characters whose emotional openness and intellectual curiosity will doubtlessly draw in and enthrall young readers. Having established Derek and Davey's status as novice magicians, one could easily imagine the exciting and hilarious directions in which this series might be diverted. While The Case of the Brown Scraggly Dog certainly provides enough appeal to stand on its own, the story's real pull is in allowing the reader to ask, "What mischief will Derek and Davey get up to next?"
To purchase a copy of The Case of the Brown Scraggly Dog, click here to find it on Amazon.

This is the fourth book in this series of mystery/detectives stories for PT/YA/MG, grades 4-7. My two middle-grandsons who are 10 and 12 are the inspiration for this fun adventures series. The cover is a photo of my daughter's dog that she had for ten years. It was my way of keeping Daisy's memory alive for the whole family.The three previous books in this series have each won a Pinnacle Book Achievement Award and Book 1 also won a Reader's Favorite Book Award Honorable Mention. I am presently working on Book 5 in which I introduce two new characters, preteen girls, who will have their own series next year. A reader requested that I begin a series for girls. Guess what? I listen to my readers. I found my niche in writing for this age group and am having a wonderful time creating stories that will keep children of all ages engaged, delighted, and learning at the same time about good behavior. All my books encourage children of all ages to be polite, respectful and kind to others.I enjoy hearing from fans and readers and love receiving reviews! Happy reading! Remember: Reading Gives You Wings to Fly! Soar with Jemsbooks!

Janice Spina is an award-winning author with fifteen published books. This Davey & Derek Series has won four book awards. Janice has been writing since age nine and continues to create more books for all ages each year. Her books are under the name - Jemsbooks. Her husband, John, is her illustrator and cover creator. Janice's goal is to encourage children of all ages to read and thus creating a new generation of avid readers. She also writes under the name J.E. Spina for her novels. Look for more books coming for all ages over the next few years. Janice loves to hear from readers and enthusiastically welcomes reviews.
Read more

Gigi Sedlmayer, Book Excellence Award Finalist winning author of the Talon series
5.0 out of 5 stars Delightful story for children and life lessons
Reviewed in the United States on February 17, 2020
Verified Purchase
Another of Janice great stories with Derek and Davey, the junior detectives.
Seeing a scraggly dog roaming around at there aunt Gigi's garden, they decided to investigate, why the dog was like that. Well, to make it short, if they wouldn't have started the investigation, a man, the owner of the dog, would have perished since he fell into a ravine and was unconscious.
Great lesson in life to look out for singes, they are different.
Read more
Helpful
Comment Report abuse

Michelle Clements James
5.0 out of 5 stars Delightful Story for Young Readers
Reviewed in the United States on May 14, 2017
Junior detectives, Davey and Derek Donato, are off again to solve another mystery with the help of Aunt Gigi’s magic and Mianna, the cat in Aunt Gigi’s crystal ball. The boys get into mischief as they try to discover what happened to the scraggly dog and how it’s paw got blood on it. The ending was a wonderful surprise and the kind of ending any child would love.
The author’s goal in writing books for children that bring to light life lessons that the children can learn from. These lessons include politeness (Davey and Derek are both polite boys), kindness (they are kind to the dog and to his owner, as well as to family and friends in this story), and sensitivity (they are concerned that their friend Mickey isn’t left out and that their mom doesn’t worry needlessly about them). Janice Spina accomplished her goal with The Case of the Brown Scraggly Dog.
This book is sure to delight. I highly recommend The Case of the Brown Scraggly Dog to young readers.
This book was gifted to me by the author in exchange for my honest review.
Read more
One person found this helpful
Helpful
Comment Report abuse

Mrs.D.
5.0 out of 5 stars Share the Magic!
Reviewed in the United States on February 8, 2018
In her fourth book, “The Case of the Brown Scraggly Dog: Davey and Derek Junior Detectives Series,” Janice Spina has created an impressive mystery story that carries on the thrilling adventures of two brothers, Davey and Derek. The friendly leading characters and thrilling adventures provide plenty of excitement and magic to young readers.

Davey and Derek are now experienced young detectives who have a few solved mysteries under their belts. But this new mystery about the scraggly dog would be not so easy to solve if not for Aunt Gigi and her crystal ball and her magical way of teaching boys how to travel.

What the boys discovered at the end of the story surprised me the most. Well-executed ending of the gripping mystery!

As in her previous books, the author provided plenty of life lessons for children. Janice completed her goal with the most valuable teachings about respect, compassion, and understanding. She wisely underlined the purpose of her series, lessons that are very needed for middle school children.

Readers will love this mystery for many reasons, but I love it for the thrilling twists and turns and lessons this story carries. I am sure readers will be anxious to find out what happens in the next book. Woohoo! I’m a lucky one! The author just sent me her Book 5. So I am off for another exciting adventure!! The twins have magic to share their power, and as a reader, I will learn more about amazing ways to solve the startling mysteries…
Read more
Helpful
Comment Report abuse

Deanie Humphrys-Dunne
5.0 out of 5 stars Another amazing mystery by Janice Spina!
Reviewed in the United States on January 20, 2017
This time junior detectives Davey and Derek have a new adventure when a mysterious Scraggly dog appears in their neighborhood with blood on her paw. What happened? Where is her owner? Readers will love this mystery and be anxious to find out what happens next. The twins' Aunt Gigi has her own magic to share and the boys learn more about amazing ways to travel.The story is engaging, as are all of Janice Spina's tales.There's even a surprise ending. Be sure to get your copy today.
*I received a free copy of this book and chose to review it.
Reviewed by children's author, Deanie Humphrys-Dunne
Read more
Helpful
Comment Report abuse

Michele Rolfe
5.0 out of 5 stars New Magic Spell & Mystery
Reviewed in the United States on January 1, 2017
The twins are learning a new magic spell & stumble on the Mystery of the brown scraggly dog! The dog has blood on its paw & the clues seem to lead to someone being injured. What Davey & Derek find is NOT what they thought! Love the twists this takes. Very good again, Janice! I am giving an honest review for a copy of the book as an advance reader.
Read more
Helpful
Comment Report abuse
See all reviews