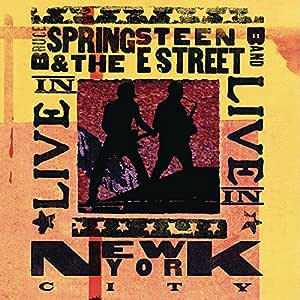 Save with Used - Very Good
$8.50
Ships from: Amazon
Sold by: BlueBirdNerd

If Bruce Springsteen & the E Street Band were a playground basketball team they'd be the one made up of local legends that don't have as much spring in their legs as the young bucks, but get by on guts and guile. Culled from the two Madison Square Garden shows that closed out the revived E Street Band's 1999-2000 road show, this 20-song collection deftly entwines fan favorites with fresher material, including two new offerings, the stately "Land of Hope and Dreams" and the solemn "American Skin"--the latter prompted by the shooting of unarmed New Yorker Amadou Diallo by police officers. When Springsteen and company (including both Miami Steve Van Zandt and his successor, Nils Lofgren, on guitar) look back, they temper the force of the original arrangements with ingenuity and a sense of spacing. The E Street Band in their heyday may have served up four-hour marathons, but they felt stopwatch-tight. Here Springsteen reconciles his rocker and reflective sides as "The River" curves along through a serpentine course, "Mansion on the Hill" is given a curious (albeit lovely) Hawaiian treatment, and "Born in the U.S.A." resurfaces as a deep-blues lament. The gang can still muster a take-no-prisoners attack, as witnessed by the hard-charging likes of "Two Hearts" and "Tenth Avenue Freeze-Out." --Steven Stolder

4.8 out of 5 stars
4.8 out of 5
433 global ratings
How are ratings calculated?
To calculate the overall star rating and percentage breakdown by star, we don’t use a simple average. Instead, our system considers things like how recent a review is and if the reviewer bought the item on Amazon. It also analyzes reviews to verify trustworthiness.
Top reviews

Ajo Way
VINE VOICE
5.0 out of 5 stars Oh My God This is Fantastic!
Reviewed in the United States on June 10, 2013
Verified Purchase
I can't believe I have been indifferent to Bruce Springsteen from the Time and Newsweek covers back in the early 70's until this week. I'm a musician and was a jazz snob for years. I saw Bruce's performance in the Superbowl a few years back and thought, yeah this guy is pretty darn impressive. But then all hell broke loose with our family, we had to relocate across country (like one of his songs maybe) and forgot about it. I don't know what prompted me to look at this but WOW I am glad I did. I am a convert at 58 years old.

I've had this for about two weeks now and I'm just gonna say it (write it). I own hundreds of CDs - from Miles Davis to John Coltrane to Zappa to King Crimson to The Clash etc etc. I'm a musician and I especially love live sets. This is flat out the most fantastic live recording I own. Land of Hope and Dreams is the most tour-de-force thing I have ever heard. It is just breath-taking. The tension and release is almost unbearable and that gut wrenching, otis-redding-type of scream at the end of the piece just leaves me saying "sweet Jesus" and shaking my head, every time.

TWO YEARS LATER: This release is ALWAYS on my IPod

James D. DeWitt
5.0 out of 5 stars Reverend Bruce and Redemption Through Rock and Roll
Reviewed in the United States on July 26, 2001
Verified Purchase
I saw one of the Oakland, California shows relatively early in this tour. I hadn't seen Springsteen live since the late 1970's. The Oakland show was wonderful beyond words; I waited a while before buying this album because I was afraid it would spoil my memories of the live show. I needn't have worried. He closed the Oakland show with "Land of Hope and Dreams" and I was delighted to find it here. He also gives us "41 Shots," which is as powerful as any song released by any artist in the last five years. Tracy Chapman will someday cover "41 Shots."
But mostly this is Bruce Springsteen, with the same energy and power he had 25 years ago, telling us and showing us that this far down the road he still believes that rock and roll can save us, can redeem us. He still believes music can change the world. At a time when it sometimes seems that no one believes in anything besides greed any more, that's a might fine message.
The old songs are rendered in new and interesting, sometimes powerful ways. Like Bob Dylan and Van Morrison, he is still experimenting, still trying to make each show fresh and interesting. Too few artists make the effort. I don't go to live shows or listen to albums of live shows to hear note for note versions of the studio tracks; I want to hear if the artist has something new to say. Bruce Springsteen will never, ever let you down; it always fresh, different and new.
Whether it's the whole band singing lines from "Wait for Me," transforming a love song into a pledge about the future of the E Street Band, or using "Tenth Avenue Freezeout" to preach the redemptive power of rock and roll, the old stuff is new.
"Land of Hope and Dreams," his closing number in Oakland, is a stunning reply to another song about sinners and trains, exactly analogous to Woodie Guthrie's "This Land Is Your Land," which fans will recall from the "Live 1975-1985" compilation. Bruce still makes you think.
And then there's "41 Shots," which some reviewers have criticized as 'too repetitive' in its constant refrain of the title; dudes, count the number of times it gets said. I get just about 41. You bet it's repetitive. But Bruce never does anything without a reason.
But the thing that struck me the most at the Oakland show and after listening to this album (other than this 51 year old's level of energy) is that the man still cares. He cares about this audience, he cares about the world and he cares about his art. And he's not afraid to let you know it. Buy this album.
Read more
10 people found this helpful
Helpful
Comment Report abuse

Beach Gal
2.0 out of 5 stars Not whole concert. No Backstreets, Darkness on the Edge of Town, Light of Day, The Promise, and.....Thunder Road???! Really?
Reviewed in the United States on May 29, 2016
Verified Purchase
Eh. I bought this because we LOVE the DVD (Bruce Springsteen & the E Street Band Live in New York City) and didn't want to mess with pulling the audio from it. I should have looked at the song list; too many of our favorites are missing. The DVD has a fabulous re-do of Darkness on the Edge of Town (and I don't usually like re-dos...) and it isn't here. As an aside, New York City Serenade, at the end of the DVD, is a great interview with the entire band reflecting on their coming back together after so much time apart.
Read more
2 people found this helpful
Helpful
Comment Report abuse

Stacey Kimmel
2.0 out of 5 stars Vinyl format
Reviewed in the United States on October 4, 2020
Verified Purchase
This review is specific to the vinyl format rather than the songs or album.
I did not have this album on vinyl and was hoping songs like Jungleland and Land of Hopes and Dreams would sound better than my old CD. I am very disappointed in the sound quality of this pressing. Songs sound compressed and inconsistent throughout. Perhaps I received a bad pressing but it sounds like they made this from a low quality digital source converted to analog. Too bad was really looking forward to this finally on record. Also bought the rising on vinyl and must say that album sounds great. Buy that album on vinyl instead much better sound quality
Read more
Helpful
Comment Report abuse

Clifford Brown
5.0 out of 5 stars WOW!
Reviewed in the United States on April 9, 2001
Verified Purchase
Okay, so "Born to Run" is not listed on the track list, the "bonus" tracks are stuck at the end, and the sequence is odd at best. So what. This album rocks like only Bruce Springsteen & The E Street Band can rock. There is nothing better than sitting back, turning up the volume REAL loud and listening to what rock & roll is supposed to be. The sheer pleasure the band gets from performing together is evident throughout. And if there was ever any doubt about Bruce as a songwriter, American Skin (41 shots) should settle that forever.
Anyone still hung up on the sequencing, use your CD player to program the order any way you want. Or copy and reburn to your heart's content.
Bottom line, this is great music made by the greatest performance band I have ever seen. Lay down your money and enjoy!
Read more
8 people found this helpful
Helpful
Comment Report abuse

Amazon Customer
1.0 out of 5 stars Quality Issues
Reviewed in the United States on May 20, 2020
Verified Purchase
In the process of returning this, and his greatest hits for a replacement
Brand new, unwrapped shrink wrap, played all of them, they skipped.
Read more
Helpful
Comment Report abuse
See all reviews

Elsie
5.0 out of 5 stars Good Live
Reviewed in the United Kingdom on August 13, 2019
Verified Purchase
Not listened to BS in a long time, just got back into it. Nice to hear the old stuff but the new (to me) is very good also. Checked the reviews and decided to go for this one, albeit quite old now.
Read more
2 people found this helpful
Report abuse

Owen Roberts
5.0 out of 5 stars Bonus codes in album... And amazing
Reviewed in the United Kingdom on April 7, 2020
Verified Purchase
OK... It seems the Springsteen re-issues come with codes to redeem... But they give you 2 albums. You get this AND the 18 tracks album. Not sure if this is intention. But if you bought the 18 tracks album it also does it in reverse.... You get this.
Read more
Report abuse

Iain Moss
5.0 out of 5 stars Waited for years
Reviewed in the United Kingdom on March 9, 2020
Verified Purchase
Waited for years to get this album on vinyl and was worth the wait absolutely fantastic set of songs from the E Street Band
Read more
Report abuse

The live versions of all add energy and passion in a way that is almost unique to him IMHO. Only Neil Young is truly comparable.
Read more
Report abuse

Cliff
5.0 out of 5 stars Turn up load and your there with the boss
Reviewed in the United Kingdom on March 17, 2020
Verified Purchase
Sounds so much better on vinyl .
Great recording really get the atmosphere a good price for 3 records
Read more
One person found this helpful
Report abuse
See all reviews

Page 1 of 1 Start overPage 1 of 1
This shopping feature will continue to load items when the Enter key is pressed. In order to navigate out of this carousel please use your heading shortcut key to navigate to the next or previous heading.
Back
Next
Pages with related products. See and discover other items: live albums, america band, music city, asia band, Bruce Springsteen New Albums