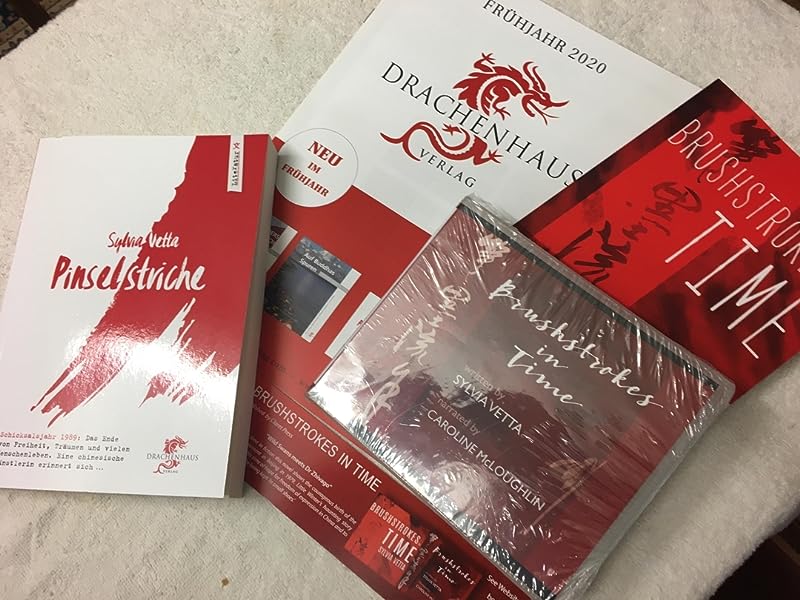 by Sylvia Vetta (Author)
4.9 out of 5 stars 17 ratings
See all formats and editions
Sorry, there was a problem loading this page. Try again.

This superbly researched and beautifully told fictional memoir is about love, art, and Chinese history and politics.

"This is the book I struggled not to write. I buried the pain along with my Chinese name and changed my fate."

Brushstrokes in Time is the fictional memoir of Chinese artist Little Winter, who tries to re-establish the bond with her American daughter, telling the story of her emotional and rebellious past. While growing up in Communist China, Little Winter discovers talent and rebellion, joining ‘The Stars’ art movement for freedom of speech in an era where self-expression and love was a dangerous act.

Little Winter and her haunting love story connects us to a time of hope for freedom, and to a man frustrated by being kept in small shoes.

Based on real life events.

'Brushstrokes in Time narrates a compelling story. Rooted in history with richly imagined settings and unforgettable characters, this novel presents a vivid picture of what life was like in China during the Cultural Revolution.' Shrenik Rao,

'Sylvia Vetta evokes in her lively narrative China's turbulent political culture of the '70 and '80s, when China's youth struggled for self-expression against official censure. Whether describing how students were "sent to the countryside" in the Cultural Revolution or how, after Mao died, young artists hung their experimental work outside the national art gallery, Vetta is always accurate with a grasp of vivid detail.' John Gittings, Guardian's chief foreign journalist specialising in China

'Weaving real events and Stars artists (including Ai WeiWei) with the fictional, this moving story shines a light on the internal workings of China and gives us an engaging heroine who rises above oppression to discover love, hope and success.' Frank Sieren, Asia Expert

Freelance writer, author and speaker, Sylvia Vetta took up writing and broadcasting on art and antiques in 1998 when she began writing features for the award winning magazine of The Oxford Times. She went on to write for four magazines on art, history and science-related events. Sylvia Vetta has a lifelong passion for China. Her extensive interviews with Stars art movement founder, Qu Leilei, inspired her to write Brushstrokes in Time. Her long-running profile series, Oxford Castaways, has been compiled into two books. Reflecting her interest in China, castaway interviewees have included Lord Patten of Barnes, the last governor of Hong Kong; Dame Jessica Rawson, the curator of prestigious exhibitions on China; Dr Maria Jaschok, who lived in China from 1979-1995; and Oxford-based artist Weimin He.

For 20 years Sylvia wrote the life stories of others including 120 Oxford Castaways for The Oxford Times turned into 3 books and three novels inspired by real events and real people. Sylvia says ‘It’s been difficult writing about myself but a memoir is not an autobiography & Atam let me tell his refugee story too'.

Food of Love cooking up a story across gender class and race has glowing endorsements from historian Rana Mitter, journalist Yasmin Alibhai Brown, Professor of Education at Oxford Brookes Dr Jane Spiro, and Dr Flair Donglai Shi, Associate Professor of World Literature, Shanghai Jiaotong University and more. I’m delighted that artist Diana Bell says amusing and entertaining because I don’t want anyone to reach the end and not feel HOPE!

Brushstrokes in Time is a fictional memoir set against real events. Little Winter, tries to re-establish the bond with her American daughter, telling the story of her emotional and rebellious past. While growing up in China, Little Winter discovers talent and rebellion, joining ‘The Stars’ art movement for freedom of speech in an era where self-expression and love were a dangerous act. Filmmaker Andy Cohen found 40 minutes of contemporary film about the Stars. (1979) Watch the trailer on this link. https://www.beijingspringfilm.com/

Praise for Brushstrokes in Time

John Gitting: the former chief foreign correspondent of The Guardian was determined to find fault but failed and says ‘Vetta is always accurate with a grasp of vivid detail.’

Dr Jenny Lewis: internationally respected poet ‘It has to be among my top ten historical novels, certainly of this century. Utterly mesmerising and unforgettable.’

Judy B.
5.0 out of 5 stars A gift to youth, and to us all
Reviewed in the United States 🇺🇸 on October 5, 2016
Verified Purchase
Brushstrokes in Time comes as a significant gift from Sylvia Vetta. Although those of us old enough to remember tumultuous times in China approach her topic with apprehension, she relates those times gently. Her protagonist Little Winter gives life to the Cultural Revolution, the Democracy Wall, and Tiananmen Square--yet the honesty comes with a restraint that works well to initiate youth to those times.
More valuable, since fewer of us remember this, she describes the Stars movement--artists daring to defy oppression with new, more international styles to display new ideas of democracy. And by demonstrating the human spirit rising above all restraints and threats, Vetta makes this book relevant to all of us. In any time, for each of us, the need for loyalty to ideals, for honoring each human stands essential.
Brushstrokes in Time encourages us to show that courage to our own ideals.

Amazon Customer
5.0 out of 5 stars Read for art, love, and The Stars
Reviewed in the United States 🇺🇸 on January 25, 2016
If ever a novel resembled a piece of fine art, it is this one. Brushstrokes interweaves drama, art, personal history and politics, documenting an eye-opening period in China. Brushstrokes will take you through the emotional spectrum, from tears to clenched fists, as you follow Little Winter's disbelievingly difficult life between and beyond the years of Chairman Mao's rule. Read if you're a lover, daughter or son. Read for reassurance, excitement, and solitude. Vetta possesses a marvelous tenacity towards presenting the organic truths in the lives we lead. It'll unveil all manner of secrets and passions hidden from our comprehension.  Brushstrokes in Time
Read more
Helpful
Report abuse

Tobias C
5.0 out of 5 stars Such a good story
Reviewed in the United Kingdom 🇬🇧 on April 4, 2020
Verified Purchase
Syliva Vetta's historical fiction is great for lots of reasons. It's a fascinating introduction to some of the key developments in 20th century Chinese politics, with Vetta's premise of an aging mother writing to her American daughter cleverly allowing the narrator to contextualize unfamiliar terms or events without breaking character (even if this is inevitably a little clunky at times). It's also an engaging account of the Stars art movement, especially some of the lesser known members who don't have the international profile of figures like Ai Weiwei.

But even if all of this wasn't the case, ultimately, it's just a great story. Without writing that draws attention to itself, all the focus is on telling a compelling tale that is a pleasure to read. Go pick up a copy!
Read more
Report abuse

serpentine
4.0 out of 5 stars Engaging,deeply moving historical novel
Reviewed in the United Kingdom 🇬🇧 on April 18, 2016
Verified Purchase
Gripping and sensitively written story. I wish I had read it before visiting China - I am now a lot less ignorant about the country and its history. I learned a lot without once feeling confused or talked down to.
My only reservation is to do with the way Vetta handles the italicised 'asides' addressed by the narrator to her American teenage daughter. I thought these were sometimes a bit too long and repetitive. But that is a minor quibble.
Read more
Report abuse

Gina Marsh
5.0 out of 5 stars Compelling and well-researched
Reviewed in the United Kingdom 🇬🇧 on November 5, 2019
Verified Purchase
An incredibly enjoyable read offering a glimpse of what it was like to grow up and live in Mao's China. I particularly enjoyed the love story of Little Winter, which is compelling and fraught with complications and tragedy - a testament to this universal human experience, regardless of ethnicity or background. I was also fascinated by Vetta's historical narrative which shines a light on the Stars Art Movement in China offering an insight into how art can be used as an expression of freedom in the space of oppression. Would highly recommend!
Read more
Report abuse

Ray Foulk
5.0 out of 5 stars Everyone should read this book
Reviewed in the United Kingdom 🇬🇧 on March 22, 2016
Verified Purchase
I haven’t done much work today because I could not put this page-turner down. As I reached the end just one thought dominated: “Everyone should read this book”. The modern history of this huge chunk of humanity should be of interest to us all and Sylvia Vetta’s historical novel not only provides an account of that uniquely complex society, it does so in a remarkably entertaining, compassionate and economical way. No one I’ve ever come across has managed to tell the story of modern Chinese politics, arts and society in so accessible, imaginative and compelling a fashion. - Now I must try and catch up with my work. RAY FOULK
Read more
Report abuse

Josh H.
5.0 out of 5 stars A very strong read
Reviewed in the United Kingdom 🇬🇧 on August 29, 2018
Verified Purchase
It was impressive how the author engaged with historical context, effectively giving an account of a key period through a very human perspective. It was educational but also entertaining- I liked how developments in Xiaodong’s life were used to showcase key events; it never felt forced, or as if she was an observer for no good reason. There were occasional instances where I felt her life was very eventful indeed, but I felt that added to the story element and gave the author more opportunity.
In all, if you want to read a strong story and learn about Communist China at the same time, this is the book for you.
Read more
Report abuse
See all reviews