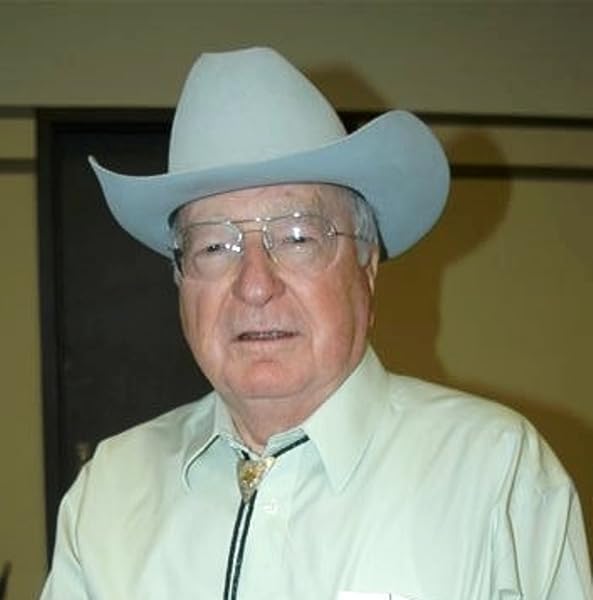 Elmer Kelton (1926-2009) was the award-winning author of more than forty novels, including The Time It Never Rained, Other Men’s Horses, Texas Standoff and Hard Trail to Follow. He grew up on a ranch near Crane, Texas, and earned a journalism degree from the University of Texas. His first novel, Hot Iron, was published in 1956. Among his awards have been seven Spurs from Western Writers of America and four Western Heritage awards from the National Cowboy Hall of Fame. His novel The Good Old Boys was made into a television film starring Tommy Lee Jones. In addition to his novels, Kelton worked as an agricultural journalist for 42 years, and served in the infantry in World War II. He died in 2009.

Start reading Buffalo Wagons on your Kindle in under a minute.

Becky C
5.0 out of 5 stars Another Excellent Book by Kelton
Reviewed in the United States on January 10, 2010
Verified Purchase
Buffalo Wagons, by Elmer Kelton is another excellently written, entertaining novel by this 7 time Spur Award Winner. The story itself is greatly buoyed by the book's historical references, informing the reader of the nature of the great buffalo slaughter and the reasoning behind this environmental tragedy.

Kelton's story is completely arresting. His characters represent a smorgasbord of Western frontiersmen, and many are not very nice. In fact, more than a few are thieving, murdering sociopaths.

What is particularly interesting, given the historical bent of the book, is the extreme measures these men went to, and the incredible hardships they endured to "get rich." Truly it makes one wonder about men! Were these buffalo hunters/frontiersmen the exception? Or were all early Western men this aggressive, rugged, tough, and brutal?

Kelton, as always, is so very gentlemanly in his treatment of romance and women, and this book is no exception. After his main man rescues a maiden in distress who'd been kidnapped by Indians, Kelton handles the romantic aspect of the book very traditionally. Thankfully, he included a touch of romance, or the story might have stalled despite the bloody tale he tells. It also helped give a touch of decency and humanity to several of the characters, making them all the more likeable, otherwise their blood lust for buffalo hides would have rendered them just as bad as the true antagonists in the book.

kone
3.0 out of 5 stars Average western Fare
Reviewed in the United States on January 19, 2015
Verified Purchase
Having read "The Good Old Boys" and "The Time It Never Rained", I had high expectations for this Elmer Kelton book. While it was a good story, and kept my interest, it is not in the same class as those previously mentioned. Somewhat predictable and having few really interesting characters, "Buffalo Wagons" is average fare, not the compelling reading I'd come to expect from Kelton. This is not to say the novel is bad, it isn't, but in my opinion, it is a typical pulp western novel, not one that sets itself out as truly remarkable. Kone
Read more
Helpful
Comment Report abuse

Richard Krieg
5.0 out of 5 stars Excellent Western
Reviewed in the United States on May 22, 2014
Verified Purchase
This is among the best Westerns I have read.
It describes one of the most odious professions (mass buffalo slaughter) from the point of view of the hunters themselves. They do it because it is one way to make a living during tough economic times.
The personal interactions between the good guy (Gage) and the outrageously bad guy (Ransom) are very realistic, and one can see parallels in one's own interpersonal interactions.
I read chapters 8 and 9 twice, one right after the other, and then read the whole book again.

grizzly bear
5.0 out of 5 stars Another great story by Elmer Kelton. The more of his books I read, the better they seem to get!
Reviewed in the United States on April 4, 2018
Verified Purchase
Typical Kelton story! great tale with all the things needed for a good western! It has good guys, bad guys, buffalo, Indians and a great story line.
Read more
One person found this helpful
Helpful
Comment Report abuse

Jim
4.0 out of 5 stars Ecellent Texas Frontier Reading
Reviewed in the United States on March 9, 2014
Verified Purchase
This was a rough, tough era in the settling of West Texas. Every facet of the hook and crook life lived out on the Plains is involved in this novel. Elmer's writing is unbeatable. You can't put his books down once you get into it. It's a shame that we have lost him. There will never be a replacement for Elmer Kelton.
Read more
Helpful
Comment Report abuse

Lucky
5.0 out of 5 stars The book arrived quickly and in great condition.
Reviewed in the United States on July 14, 2019
Verified Purchase
My husband enjoys the Elmer Kelton books and was very happy with this one.
Read more
Helpful
Comment Report abuse
See all reviews