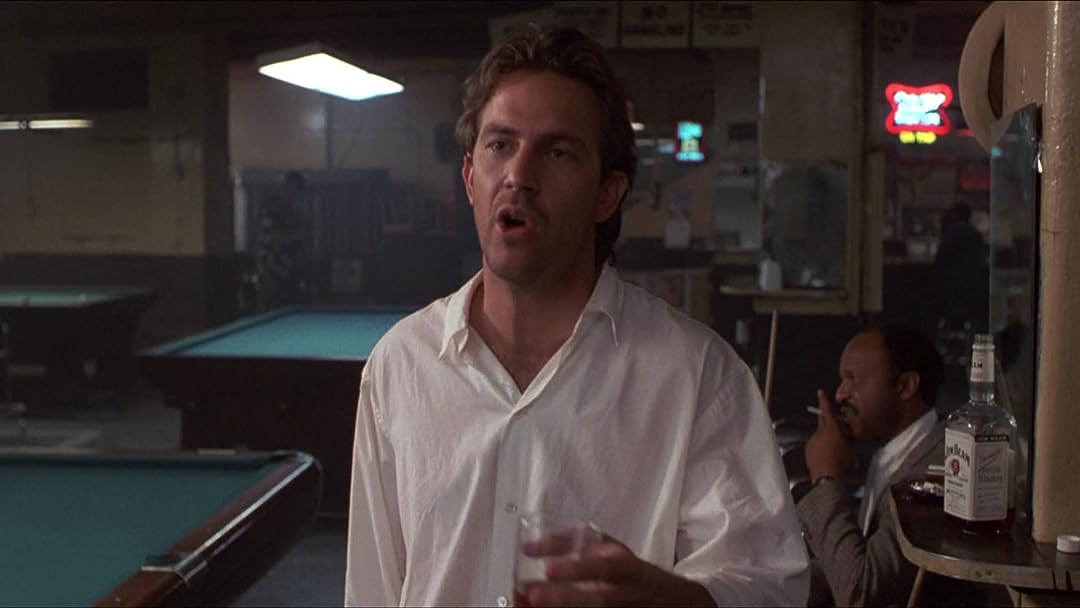 frequent userReviewed in the United States on November 16, 2022
5.0 out of 5 stars
American Classic
Verified purchase
Great cast, great fun and probably the only baseball movie that stars a catcher. Not your every day sports hero movie. As good as sports movies can get.

R.A. McKenzieReviewed in the United States on March 7, 2008
5.0 out of 5 stars
Welcome To The "Show"!
Verified purchase
If you've never seen "Bull Durham" before, and are tempted to write it off as another sports flick, I beg you to rethink your position. Let me tell you my all-time favorite sports movie: "Hoop Dreams". What about it resonates with me so strongly? It's not a basketball movie --- instead, it is a character drama that just happens to exist within a basketball court. In other words, where the story takes place is irrelevant; what dominates the picture is how the story (or real-life events) affects the characters (documentary subjects).

"Bull Durham" might not belong in the realm of that classic, but skeptics shouldn't dismiss it simply because it involves baseball. Overlookers won't realize that it's a funny exploration of how people discover their own ambition; the dirt diamond & ball are circumstantial.

The story begins when a minor league team is joined by veteran catcher Crash Davis (Kevin Costner). Crash has been given the unenviable task of mentoring an immature pitcher whose deadly fastball "couldn't hit water if he fell out of a boat". Tim Robbins plays the pitcher, Eddie Laloosh. Eddie soon takes the nickname "Nuke"; Crash decides "Meat" is a better way to condescend the undisciplined rookie.

Let me pause there, because this sound like we're going to get a fairy tale of how a cynical teacher and hotshot student will become better humans by the end of their journey. Thankfully, writer-director Ron Shelton was much smarter than this, and doesn't treat his story like a whimsical children's book. Crash and Nuke engage in some of the harshest (and funniest) banter in the history of comedies; the only times either learns anything from each other is because one just can't deal with the tension and submits. I won't give anything away, but if you've never seen this movie before, you'll thank me later when Nuke shakes off Crash's pitching calls --- twice! If for whatever reason you don't like Costner or Robbins, their perfect chemistry will change your mind. It's been 20 years since "Bull Durham", and both actors have rarely been better.

When this unbearable pairing of Crash & Nuke begins, they soon meet Annie Savoy (Susan Sarandon). Annie is a strange blend of sexual creature and muse. She takes one player per season, and selects that player as her mate and student. In the hands of another actress or director, this would come off as sleazy & trashy. But once Annie begins to make her new choice stimulate his mind with poetry BEFORE satisfying his primal urges, it becomes clear that eroticism is not even a factor. You know, when I think of Sarandon, "sexy" is not the first word to come to my mind. But "Bull Durham" convinced me otherwise. Just look at the boxart! But then wait until you watch the performance: it's a treasure from her opening monologue to the emotional finale!

What results from the Crash/Nuke bickering, Annie's sensual tutoring, their bizarre triangle, and the adventurous Durham Bulls season is a movie that is achingly funny...but then Shelton gently pulls the curtain back to reveal some more layers.

I forgot the mention the Durham Bulls team name earlier because they're not the primary focus. I haven't revealed many plot points because the plot's mostly in the background. I can't recall any 'BIG GAMES' or 'TWISTS'. Hell, there's hardly any baseball for the last 30 minutes of the picture! What "Bull Durham" leaves with viewers are the characters & the little details. We don't care which games the Bulls won, but we remember the teammates' weird superstitions & conversations. Annie's teachings are incredibly silly, but she eventually acknowledges how ridiculous some of her behavior is. The three principals do discover their dreams, but in a most unlikely way. The romance is sweet, patient, and believable offbeat. Best of all, "Bull Durham" works on all paces --- it speeds up to make us laugh, and still keeps our attention when it slows down for reflection.

"Bull Durham" is a hard movie to describe because there's really nothing else like it. Ron Shelton has created a small-town comedy that resembles something from Frank Capra's mind. It's as much a celebration of life as it is a parody of it. There are no grossout gags; just strong acting and intelligent writing. The game of baseball is merely a catalyst of more meaningful ideas. But have no fear: there's plenty of baseball comedy for sports buffs.

"Bull Durham" includes the good times of a "movie", but earns its place as a "film" --- the perfect balance of entertainment and genius!

I'll come back and review these special features. Just looking at these Extras convinces me that the earlier DVD release will soon be obsolete.

Dr. WolfeReviewed in the United States on October 23, 2022
5.0 out of 5 stars
Excellent movie
Verified purchase
Great movie, a bit of a love story, but one of my favorites. I just have to watch it every couple of years.

I saw a few things to pick apart, some flaws, many parts of the movie, I applaud. Saw a lot of '80's clothing like polo shirts with one collar flipped up. I love the movie, now in a different way than I did 40 years ago.

It is a special movie, almost like a dream, however so real. It catches the emotions of each character; superbly and the casting was to perfection. When a movie can 36 years later instill new emotions to the viewer and allow the viewer to see it in a different way than when 1st seen; Well that to me is a sign of a great movie.

I give it a solid worth watching if you are looking for some time to kill. <y biggest question is regarding Crash Davis's Airmen jacket. He slid around in the mud when he created the "Rain-out". I doubt their is a place in Durham or where that red mud could be cleaned so thoroughly, as we saw later in the movie. Personally , I would have liked to seen a worn jacket with mud, and not a brand new clean jacket... That is me though.
4 people found this helpful

Venita McCellon-AllenReviewed in the United States on October 7, 2022
5.0 out of 5 stars
Such good memories
Verified purchase
Classic and yummy fun!

Phil WReviewed in the United States on October 8, 2022
5.0 out of 5 stars
The greatest baseball rom-com
Verified purchase
A classic

Khristine JacksonReviewed in the United States on March 20, 2021
4.0 out of 5 stars
Yes ... ... Crash/Costner ... is the Whisperer ... after all..
Verified purchase
This movie was a very popular movie at it's time .. There was something about all three co-star's that made them shine in this movie. Actor Kevin Costner ..such a handsome ..gentle but mysterious figure on film. In his high school years he did play baseball,. which is why he seemed like a natural in the film. First of all there really is a team called the "Durham Bulls".. and they are a minor league Triple-A East and the Triple A affiliate of the Tampa Bay Rays . Their home is in Durham,North Carolina. The movie scored in the box office with a 7 million dollar budget production wise.. returns were over 58 million dollars . In real life there was a real pro ball player named Crash Davis who played in the 1940's for the "Philadelphia Athletic's" from 1940-1942. He sadly passed aawy in 2001 at the age of 82 years old. It is considered the Greatest sports movie and number 3 by another publication. Susan Sarandon plays a a wise cracking groupie ..but one that is not sleazy. She asserts herself into each player's life like that of a mother, a lover and a coach .. At the time of this movie she began her romance with actor Tim Robbins who she had two sons with .. she is older than he . She was born in 1946 and he was born in 1958 .. they never legally married. They did split up in 2009 .. Not bad ... for a May -December romance. Tim Robbins is a wonderful actor and if you recall "The Shawshank Redemption" ..he really shined in that movie. Between him and Morgan Freeman .. they took us on a journey... that I can say that he so deserved his Oscar and Golden globes for a job well done in his career. I like the small town vibe of the movie .. the love scenes were done tastefully and the supporting cast made you feel at home. Sadly actor Trey Wilson who played the coach died suddenly in January 1989 at the age of 40 of a cerebral hemorrhage.... The director Ron Shelton was a former minor league baseball player .. he is married to actress Lolita Davidovich .. he resides in Southern California. As for baseball movies .. there are many out there, Some people like this one while other's may not? .. I still like the on screen chemistry between Kevin and Susan..
7 people found this helpful

joel wingReviewed in the United States on April 20, 2021
4.0 out of 5 stars
1 of Kevin Costner & Susan Sarandon's best movies
Verified purchase
Every season Susan Sarandon picks one up and coming minor league baseball player to be with to shape him into a man and a better ball player. She picks Tim Robbins who is a hotshot pitcher but a bit of a dimwit. Competing for her attentions is the old vet whose on the verge of retiring Kevin Costner. The movie is one of the best for both Sarandon and Costner and that’s for good reason. Many times Costner comes off as stiff and emotionless. Here he’s loose and joking around. Costner for example does a voice over of his thoughts when he’s at bat which are very funny. Sarandon on the other hand is like a guru for Robbins telling him how to improve on his pitching through things like wearing garter belts. Robbins has his own musings whenever he pitches as well. It’s a very fun film with a different take on your usual sports story.
2 people found this helpful
See all reviews
Back to top
Get to Know Us
Make Money with Us
Amazon Payment Products
Let Us Help You
EnglishChoose a language for shopping. United StatesChoose a country/region for shopping.
© 1996-2022, Amazon.com, Inc. or its affiliates