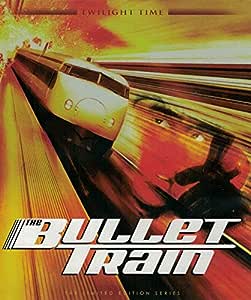 The basis for the 1994 American hit, Speed, The Bullet Train (Shinkansen Daibakuha, 1975) stars the wonderful Ken Takakura (The Yakuza) as a mad bomber who plants a device on a high-speed Japanese train, programmed to detonate if the train’s speed drops below 80 kilometers per hour. His design: to collect a multi-million-dollar ransom. Also starring martial arts hero Sonny Chiba as the train’s clever engineer; directed by Junya Satô (The Silk Road).

Pavel Peev
5.0 out of 5 stars It excited me when I was a kid
Reviewed in the United States on August 2, 2005
Verified Purchase
I saw this movie about 25 years ago.

I was just a kid, but my memory of this movie is very good and exciting.

When I was watching the movie, the cinema projector in the movie theater burned out. So I only saw half of the film.

I want to see it again, in its entirety.

There is a lot of action and suspense in it.

The american movie "Speed" is based on this Japanese original.

Dave Truscott
1.0 out of 5 stars yecch
Reviewed in the United States on June 17, 2014
Verified Purchase
This one of the worst movies I have ever seen. After watching, I actually threw the DVD in the trash. I was only out $10.
Read more
Helpful
Report abuse

Jorge A. Zarco
5.0 out of 5 stars Bullet Train(1975)
Reviewed in the United States on March 14, 2018
In Bullet Train(1975), a disgruntled construction worker plants a bomb on a bullet train. Once the train goes 80 km an hour, the bomb is armed.
If it drops below 80 km an hour, the train explodes! Does this plot sound familiar? Speed(1994) was a loose remake of the film. I've only seen the English dubbed version of Bullet Train; the picture quality is muddy and it has "Speed Racer" style voices. The music cue for the bad guys in Bullet Train is a sad, sombre, downbeat music cue. I felt sorry for the bad guy who blows himself up with a stick of TNT. Sonny Chiba had a bit part in the film as a train conductor. Bullet Train was made in the mid-1970's when Hollywood filmmakers were churning out disaster films. Bullet Train is a Japanese film with an all Japanese cast; it was spoofed in a City Hunter TV movie in the 1990's. The film shows people helping each other once a disaster has happened. This film inspired movies such as Speed(1994) and Chill Factor(1999). Bullet Train is a classic, people!

Trevor Willsmer
2.0 out of 5 stars More static than Speed
Reviewed in the United States on February 15, 2008
Pop quiz: there's a bomb on board and if you go under 50, it'll go off. What do you do? Well, if you're a Hollywood studio, you move the bomb from 'The Bullet Train' and put it on an L.A. bus and hope that no-one reminds you that Japan did it first in 1975 with this Takakura Ken movie.

More a typical 70s disaster movie than a thriller, with all the stock characters onboard - yes, including the hysterical businessman and obligatory pregnant woman - Takakura Ken broods magnificently as ever as the bad guy with a grudge and a supply of explosive devices while Sonny Chiba is the driver on the train trying to prevent the big bang (no, he doesn't hit anyone for once). Shame it's so dull. There are a couple of mildly interesting plot twists and there's a surprising emphasis on the family of extortionists who are far more sympathetic than the clichéd and irritating passengers or the bungling cops, but there's no reason for it to stretch out to more than two-and-a-half hours. There's also a curious sense of constantly being outside the action, as if a passing spectator rather than a participant. One occasion where Hollywood definitely did it better.

Just to make matters worse, Crash Cinema's Region 1 DVD is atrocious - a poor dubbed transfer that's cut by some 40 minutes. You're better off seeking out Optimum's UK PAL release - it is the uncut subtitled version in a decent 2.35:1 widescreen transfer (though the colour is nothing to write home about). Extras on the UK DVD are limited to trailer, poster gallery and a selection of trailers to Chiba's action films.