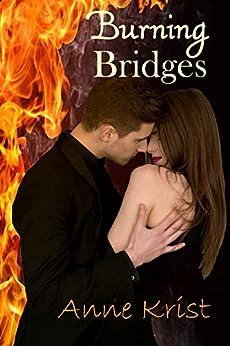 "Burning Bridges is a story that I feel many people would enjoy. I laughed and cried throughout this entertaining novel. The message in this novel is universal and could be any parent trying to ensure that their children receive the best in life. It was very easy to relate to the characters in this wonderfully written story. I was very taken with the characters; I felt the sorrow and anger of each one. This story flowed relatively well and it could be the life of anyone walking past you on the street. The dialogue was realistic and the storyline was well developed, consistent, and resolved at the end." -- Breia Brickey, Paranormal Romance

5 Heart: "I absolutely adored this story by Ms. Krist. She grabbed me from the very first page and had me riding a roller coaster of emotions throughout the entire story. This story was packed with real emotion and circumstances that made you walk away wondering if the tables were turned and this happened to you, how would you respond to finding out your parents lied to you after all these years had passed? There was a powerful -WOW- factor involved with this story. I loved the unique and extremely creative storyline Ms. Krist came up with. I feel that any reader who picks this story up will enjoy it just as much as I did. I can-t wait to read more stories from this author." --Diana Coyle, Night Owl Romance

A. Richard
5.0 out of 5 stars Unforgettable love story filled with passionate desires and potent emotions
Reviewed in the United States on January 28, 2020
Verified Purchase
Family drama filled with intensified emotional moments repeatedly takes place in this extremely compelling story, where every single situation is convincingly portrayed with much realism. From what circumstances cause an event to occur to how an individual reacts to any happenings, I was pulled into each vividly described incident and became eager to learn if there would be any consequences. The impact on quite a few of the featured characters is often very unexpected, and what choices they choose to make could greatly alter not only their lives but those close to them, too. Rarely does a story come along where I am touched in countless ways because of how much a scene affects me, yet this writer constantly does so with her first release. The name of Anne Krist will become recognized as an author who conveys genuine and heightened feelings between her memorable characters.

When Sara Richards receives letters that she should have gotten thirty-five years ago, she eventually discovers these three pieces of lost mail were not the only correspondence she never saw. A fling with a Navy sailor before he was sent to Vietnam left her despondent when Paul Steinert leaves and no word is ever heard from him again, especially when she ended up pregnant. But upon learning that Paul not only sent these letters but more that were purposely kept from her could drastically change the life of Sara and her grown daughter, depending on her next decision.

With surprising twists and believable interplay between characters, BURNING BRIDGES is an unforgettable love story filled with passionate desires and potent emotions. I was totally stunned at times, because some facts were definitely not anticipated. As Sara tries to make sense of what happened in the past and how it led to her current existence, she keeps uncovering truths which add extra turmoil to her life. All that took place when she was just a teenager now seems almost overwhelming to her as an adult. Sara knows that whatever choices she makes in the present will have a lasting effect on a large number of lives, and she must move forward carefully or the price could be too high. I will long remember this outstanding story, where honest feelings are expressed with much sincerity and the characters are particularly true-to-life.

Jeanette Beardslee
5.0 out of 5 stars A beautiful story that will stay with you for a long time
Reviewed in the United States on June 30, 2020
Verified Purchase
Sara Richards was young and innocent when she fell in love with Paul Steinert, a sailor who would soon leave for Vietnam. The quicker the better as far as her parents were concerned. All too soon he was gone, leaving Sara pregnant and devastated that he’d walked away and forgotten her. Then the news Paul had been killed in Vietnam, not knowing he had a baby daughter. Decades later Sara’s life is thrown into turmoil when three love letters from Paul Steinert, written in 1970, are delivered. The betrayal was not his but her parents who deliberately kept all those yearned for letters from her. Sara must make choices and the first is to tell Paul’s parents they have a grown granddaughter. Knocking on their door was incredibly hard but nothing prepared her for what was on the other side of that door. Paul very much alive.
We are not the same people we were thirty years ago, and this is one of the bridges Sara and Paul must cross – if they can.
Read more
Helpful
Report abuse

Virginia Campbell
5.0 out of 5 stars powerful second-chance romance
Reviewed in the United States on August 16, 2009
Verified Purchase
BURNING BRIDGES by Anne Krist is a powerful love story which reminds us that real love is imperfect and complex, but well worth having. Sara and Paul were young lovers kept apart by manipulation and self-doubt. Sara believes Paul was killed in Vietnam, and he never knew that she bore his child. Decades later, Sara receives recently discovered letters written by Paul from Vietnam. Her mother had blocked most of the letters they had written to each other. Her father had told her that Paul had been killed in the line of duty. Sara decides to visit Paul's parents to tell them that they have a grown daughter. When she reaches his family's farm, she finds Paul himself! Many deep emotional issues are faced before the love which Paul and Sara have always felt for each other burns old bridges and builds new ones into the future.
Read more
Helpful
Report abuse

CheekyChiquita
4.0 out of 5 stars Second-chance, secret-baby romance - good story!
Reviewed in the United States on February 9, 2021
Upon receipt of long-lost letters from decades ago, Sara realises that the entire life she built for herself and her daughter Paula was based on lies. When her mother admits to deceiving her by intercepting their communication in order to protect her underage teenage daughter from getting involved with an older man, Sara struggles to forgive her in the present, but more importantly — she now learns that her first love did not betray her when he left for the military and lost contact with her prior to his death. Their child is now an adult, but Sara realises it may be time to seek out her past lover Paul’s family and let them know about Paula. But when she goes there, she finds much more than she had ever bargained for — and her own lies catch up to her as she tries to open her heart to a second-chance romance.

Generally the story was good, and I enjoyed each of the main characters and understood their motivations for behaving the way they did. The author took time to develop each character, even the side characters. There were very realistic moments that you usually won’t find in a typical romance, and I appreciated the inclusion of these. All of the relationships were heavily fraught with emotional angst: Paula on the cusp of making a big leap in her love life, Sara and Matthew in an older/younger friendship/relationship that isn’t clearly defined, Sara and her mother trying to heal after decades of lies crumble on them both. The tension was well developed, and there were a few scenes in particular that had me hanging off the edge of my seat — well done!

However, there were a few choppy parts in terms of pacing — one moment we’re experiencing every single nuance of emotion with the characters, and the next I’m wishing I knew more about what had happened in the past few weeks. Also, the narrative was written in third person and though there were so many characters here that first-person wouldn’t have been feasible, still I wished it particularly during the sexy or highly dramatic moments, because it’s hard to convey all this emotion in the third person — it resulted in characters actually speaking aloud their feelings, instead of just feeling them and keeping them privy to the reader.

I enjoyed this second-chance, secret-baby, military romance a lot, and appreciated that despite ticking the boxes in terms of tropes, there was a lot of originality here that breathed through the novel and kept me interested. It was an easy read, and well fleshed out to be much, much more than just a romance. There are heavy elements of women’s fiction here, with all the female relationships — Sara and her mother, Paula and Sara, and even the developing relationship between Sara and her business partner. There was also a focus on the male relationships, which I liked as well. I would recommend this book to anyone who appreciates a good story with an emotional overload.
Read more
One person found this helpful
Helpful
Report abuse
See all reviews
Back to top
Get to Know Us
Make Money with Us
Amazon Payment Products
Let Us Help You
EnglishChoose a language for shopping. United StatesChoose a country/region for shopping.
© 1996-2021, Amazon.com, Inc. or its affiliates