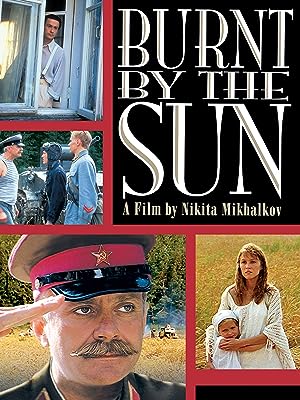 Burnt By The Sun

eric bredoReviewed in the United States on June 17, 2021
5.0 out of 5 stars
A classic
Verified purchase
For some reason this has been one of my favorite movies. The lead actor and his real life daughter add a sense of love and care amid the dangerous Stalinist era when all too many were "burnt by the sun" of revolution. The mood contrasts or juxtapositions are amazing. It's complicated, but a truly great movie.
3 people found this helpful

CGBSReviewed in the United States on June 19, 2020
4.0 out of 5 stars
Audio is Russian, not English
Verified purchase
The description of this video incorrectly states that the audio language is English. In reality, it is Russian with English subtitles. Other than that, this is an excellent movie.
6 people found this helpful

First girlReviewed in the United States on March 26, 2018
5.0 out of 5 stars
Fine Film-making
Verified purchase
This is a terrific Russian film. There is so much packed into it visually and culturally. The story is intriguing and keeps the viewer asking questions from start to finish. I highly recommend it. I'm sure my understanding is incomplete because my Russian isn't strong enough to watch without the English subtitles.
6 people found this helpful

James S. LesekeReviewed in the United States on February 21, 2003
5.0 out of 5 stars
Burned by &quot;Uncle Joe&quot;
Verified purchase
This Russian film is a cinematic treat. Beautifully filmed on photogenic locations this film starts out strong wanders around a bit and then rushes to its' end.
At times this film bogs down in its' slice of life depiction. Nevertheless, this makes the ending even more devastating, you know that these individuals' lazy, dreamy intellectual lives are over and happiness will never come to them again.
I am more willing to excuse some of the ham-handed bits of the movie, Russian movies, Russian literature; hell, most Russian art that makes it to the West has it moments of over-importance. We Americans seem to like our Russians brooding, mysterious, and over-bearing.
Not being a native speaker I can't comment on the dialog or the stilted acting, to me what these people are saying in the end really doesn't matter. It's the interactions between these people and their passions, petty complaints, and obsessions that make this movie.
Granted each character has more tics than a fine Swiss wristwatch but they are Intelligentsia.
"Burnt by the Sun" is solid film and yes, it does go over the top from time to time. However, the cinematography alone was worth an Oscar. I gorgeous colors used in the film breathe nostalgia and doom at the same time. Set design and costumes too add to this mix. The director succeeding in showing a certain class of people and their fragile lives and how those lives where steam-rollered by one of the 20th centuries worst despots.

Patrick W. CrabtreeReviewed in the United States on September 12, 2007
5.0 out of 5 stars
Watch it over and over
Verified purchase
I'm really into Russian literature and film and this one is pure cream. Perfect casting, spectacular cinematography, and a great story. This film is never boring and, for Americans, yields an incredible sense of Russian culture under Stalin; however, the tale is not at all limited to misery -- there is no shortage of light humor and very interesting day to day life experience here.
This film tells the story of a (very likeable) major Russian hero, (retired and living at an art camp of sorts), and his lovely family, and how the tide of his life turns as a direct result of Stalin's lunatic madness and paranoia. Now, I want to say up front that I usually hate smooshy script and there's none of that here, albeit, there's a basic underlying love story.
If you can at all tolerate English subtitles, don't miss this one -- it's just super and SO much better than cheesy Hollywood fluff!
26 people found this helpful

James FergusonReviewed in the United States on June 27, 2004
5.0 out of 5 stars
Under the Shadow of Stalin
Verified purchase
Mikhalkov always had a flair for Chekhovian drama, and he doesn't disappoint the viewer in this movie, which essentially updates "The Cherry Orchard" to Stalinist Russia. What we get is a tumultuous day in the life of a theatre group in a tranquil rural community, lorded over by the proud Commander Kotov, as the small town prepares for the celebration of Stalin's first ride in an air balloon. Mikhalkov deftly mixes humor with pathos, the hallmark of all his movies, as the bucolic life is broken by the return of Mitya (impeccably played by Oleg Menshikov). We slowly get to learn of Mitya's mission with a profound sense of foreboding. The acting is purposely staged to give the scenes their rich theatrical air, yet there is a naturalism too, as Mikhalkov has such a fine eye for detail. To reveal too much of the movie is to give away its stunning climax. It was one of the first films to emerge from the post-Soviet era and gave Mikhalkov a broader international audience, earning him an Oscar in 1994.
48 people found this helpful

Nick from Shelburne VTReviewed in the United States on May 21, 2011
4.0 out of 5 stars
A Silly Start... Then Morphs Into A Powerful Narrative
Verified purchase
Starts out farcically, foolishly, and tempts you to walk away believing this is an amateurish, silly, foolish movie. Then the primary characters begin to interest you, to intrigue you... and one in particular enchants you. Then you begin to realize the gravity of what is happening, and that this particular story, involving but a few handfuls of characters, is a profound narrative on the madness, brutality inhumanity of Stalin's Soviet empire.
(Minor defect: the English subtitles cannot be turned off... somewhat irritating for those that can follow the Russian dialog and don't want the distraction of the subtitles).
8 people found this helpful

Stratiotes Doxha TheonReviewed in the United States on May 30, 2014
4.0 out of 5 stars
The hero branded a traitor
Verified purchase
A moving tale of Stalin's terror as it affected one family among many. A war hero, trusting in his friendship with Stalin and his hero status is double-crossed by the dictator as happened with so many of Stalin's friends from the revolution and war years. Knowing his demise he maintains the face of strength and security for his family. The story is gripping and will quickly draw you in. The Russian is often muffled in whispered dialog and not easy for beginning Russian speakers to follow but the English subtitles appear to be accurate and do not distract from the film.
2 people found this helpful
See all reviews
Back to top
Get to Know Us
Make Money with Us
Amazon Payment Products
Let Us Help You
EnglishChoose a language for shopping. United StatesChoose a country/region for shopping.
© 1996-2022, Amazon.com, Inc. or its affiliates