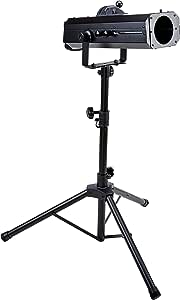 Visit the CHAUVET DJ Store
4.7 out of 5 stars 59 ratings
| 49 answered questions
Amazon's Choice recommends highly rated and well-priced products.
Amazon's Choice for "spotlight stage"
Available at a lower price from other sellers that may not offer free Prime shipping.
New (11) from $449.69 + FREE Shipping

Lynn
3.0 out of 5 stars I like the brightness
Reviewed in the United States on May 22, 2015
Verified Purchase
Went through two of these--kept the second. I like the brightness, the colors and the use of set up. I don't like the high pitched hum this one still has (better than the first one), and that the controls are hard to use in the dark--for example, you have to press (find first) the black out button to fully extinguish the light because the handle on the top (the iris) doesn't fully close to block it out. That is one extra step that can be a problem in a play production. The GOBO feature is what made me keep it--we "flew" Mary Poppins with that--simple and it worked well after a bit of playing with the size of the image on the transparency film (used ink jet style printable transparency). I would get a second to replace my older followspots, but the hum just is irritating enough that I can't do it. I would snap one up in a second if they fixed that and the iris. I know others have said that, too.
Read more
11 people found this helpful
Helpful
Comment Report abuse

ItsMe
5.0 out of 5 stars Powerful, lightweight, great throw at long distances, nice features. Recommended.
Reviewed in the United States on March 11, 2014
Verified Purchase
Great followspot. I purchased a pair, which came at separate dates. Well, and slightly, over packaged. With everything un-packed there were four boxes(for one spotlight) lying around when I finished un-packing it. Some styrofoam, wrapping paper, plastic wrapping, and tape. The lights are very lightweight themselves, and very mobile. They have useful handles to carry and I would state that most people can hold them without much strain. They seem smaller than expected, but still emit quite a punch for the size. When testing them in a large hall at a throw of roughly between 60 to 75 feet, and 16 feet above ground level on a balcony, they out-performed my expectations and doubts immediately. When the shutter is opened fully, it covered a majority of the stage, and the only mechanical downfall, or con, of this light is the lack of the ability to close the shutter fully. However, the dimming feature or black-out button feature is useful for either lengthy or abrupt blackouts. The color options were decent, but I felt that if one wanted to add different colors, a gel would been needed to attain the "look" one wanted by taping it to the front of the fixture. If the led bulb had been an RGBA or RGBAW, the color options would be far more flexible and user friendly. The price, in comparison to the feel of the unit, may seem slightly high, but the advantages outweigh the lack of these features altogether. The unit is near silent aside from a small fan noise that varies in speed when the light is at 100%; and an obscure, but barely noticeable high pitched whine(likely a ballast or similar) that is only audible to sensitive ears really. Both of which seem to vanish under a standard conversation taking place. All-in-all, it works very well for nearly anything you can throw at it. I was slightly skeptical of its power for Theatre productions and large venues, but was surprised when it worked better than I hoped it would. Chauvet did a really decent job with this followspot. I hope they incorporate more color options in the future and retain the price for average consumers who need a good light. Recommended highly. Thanks.
Read more
12 people found this helpful
Helpful
Comment Report abuse

Marc
3.0 out of 5 stars Squealing fan gives techs headache, and color temperature of "white" is actually blue-toned.
Reviewed in the United States on February 4, 2015
Verified Purchase
Replaced a standard very hot follow spot with this. There are two issues I have with this unit, and one is fatal. First, the "white" is actually about 5000k in "warmth" - so it's a blue-ish spot, not a warm 2700k or 2200k lamp. I didn't expect that, and it unfortunately makes the actors look sick. I'll caulk that up to me not noticing the color temperature on the packaging (if it's there at all).

The fatal flaw with the unit I have is the noisy fan. It has a high-pitch squeal that ended up in our recording of the show and gives the techs headaches. I have reported it to the company and am waiting for their response to see if I can get a replacement, or if it can be fixed somehow. I'll update everyone on the status of the squeal and how Chauvet handles it.

Kenny L Nipp
5.0 out of 5 stars Perfect follow spot for small venues
Reviewed in the United States on July 29, 2013
Verified Purchase
I perform in small venues. I set up this follow spot about fifty feet from the stage and it provides tremendous spot lighting. The light is extremely intense and can cause a problem with audience members eyes if you mount it too low. You MUST set it up high enough to clear all audience members. Nearly zero heat. The only issue I have with it is it's iris and focus lens adjustment arms. They're not machined well and constantly stick due to pulling on one side. If you adjust your iris or focus lens a lot in your show then you might want to look elsewhere, but for my show this spot is a must have.
Read more
12 people found this helpful
Helpful
Comment Report abuse
See all reviews

Page 1 of 1 Start overPage 1 of 1
This shopping feature will continue to load items when the Enter key is pressed. In order to navigate out of this carousel please use your heading shortcut key to navigate to the next or previous heading.
Back
Next
Pages with related products. See and discover other items: control surface, dj led lighting, dj light, dj lightings, dj sets, stage equipment