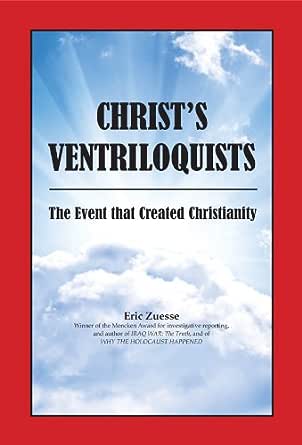 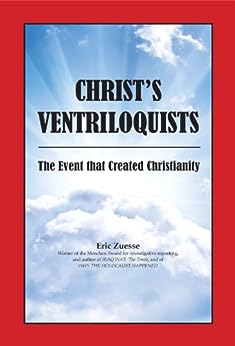 Eric Zuesse is a winner of the Mencken Award for investigative reporting. His previous books include IRAQ WAR: The Truth, and WHY THE HOLOCAUST HAPPENED. PRE-PUBLICATION ENDORSEMENTS of CHRIST'S VENTRILOQUISTS: “A winner.” — Bruce Chilton, author of Rabbi Jesus, and Director of the Institute for Advanced Theology at Bard College “My skeptical ear detects a very distinct ring of plausibility in this gripping tale. ... provocatively interesting, ... and forcefully written.” — Richard Dawkins, Oxford University and author of bestsellers The Selfish Gene, and The God Delusion “Great writing; great forensic investigation.” — David Davis, participant in the Jesus Seminar’s discussion group “This book is an absolute must-read for anyone investigating the origins of Christianity ... insightful, well-written, and powerfully informative.” — Joe E. Holman, author of Project Bible Truth “Presents a side of Paul that the general reader of the Bible, or even the scholars, miss.” — Oswald Schrag, Emeritus Professor of Religion at Fisk University, Fellow of the Jesus Seminar, and member of the Westar Institute “It works for explaining Christian origins. ... Paul has to do away with [Judaism’s demand for] circumcision. That is so unambiguous.” — James Crossley, Sheffield University Professor of Biblical Studies, and author of Why Christianity Happened “An open-minded reader/juror will come to the conclusion that [Paul] is guilty of inventing a new religion, illegitimately appropriating Jesus.” — Abe Van Luik, Ph.D., former Christian fundamentalist “It is surprising to me that this view of Paul has not been previously written. ... I love your boldness.” — Reverend Steven Michael Smith, Colona United Methodist Church, and a participant in the Jesus Seminar’s discussion group --This text refers to the paperback edition.