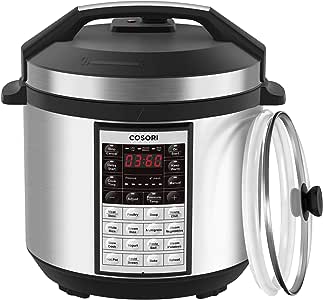 by COSORI
4.4 out of 5 stars 175 ratings
Currently unavailable.
We don't know when or if this item will be back in stock.

4.4 out of 5 stars
4.4 out of 5
175 customer ratings
How does Amazon calculate star ratings?
Amazon calculates a product’s star ratings based on a machine learned model instead of a raw data average. The model takes into account factors including the age of a rating, whether the ratings are from verified purchasers, and factors that establish reviewer trustworthiness.

Gene D
1.0 out of 5 stars What is "improved"? Where is extra function?
Reviewed in the United States on January 10, 2019
Verified Purchase
OK, let's just be honest here -- the "instant pot" business is 99% direct TV product gone viral on social media and 1% technological innovation. I understand that. But I was incredibly disappointed when comparing this product (the one selling for $95 as of 1/18) to the one selling for $65. This is the "newer model" according to Amazon, and it is advertised as 9-in-one (whereas the other one is only 8-in-1 function). Well, bad news... they have EXACTLY the same functions. The only visible difference you'll note is a revised manual which has been shortened down from 30+ pages to around 20. There may be some changes to the pot construction -- something illustrated in their marketing blurb -- but I frankly doubt it. Their website has EXACTLY the same recipes that come with the "cookbook", no more no less. And if you're not a facebook-er, you'll find they haven't done anything on their website for you.

Now, let's talk about the device itself. Right out of the box, comparing to another "direct TV" power pressure cooker I have, this one's build quality seems cheap. From the cheap feeling plastic handles to the LED display to the control pad. You get a red 1980's "digital" readout that will flash back and forth from the cook time to the temperature. OK (the other one had a backlit color display with specific text descriptions, but it couldn't countdown cooking times, thus it is being replaced). With the Cosori pot, you kinda have to guess what's going on as you try to adjust the presets with a +/- framework.

Want to cook steel cut oats? You'll find it on the "cooking time" poster, but it doesn't tell you which preset to use. For that you have to go dig through a cookbook and a manual... I think it's multigrain but I already forget (and one plays say 10 minutes, another say 15-20!). Want a hard boiled egg? It will take you 7 minutes plus time to build up pressure on Steam Veg (this is a pressure setting). Want a soft boiled egg? That's 5 minutes on "Manual Level 1" (still don't know what that means... is it pressure or not. I can soft boil eggs on my stovetop in that time!

Also, if you actually read the reviews here, you'll discover shockingly that many of the people leaving 3 and even 4 star reviews had issues with their pots. If you visit the facebook feed, you'll find tons of people with seal issues, broken relief valves, etc. As said above, I think the build quality is pretty low. I am just completely underwhelmed by this product, particularly at this price. It says something about the type of company here that they have tried to say this model has more functions than the older one so they can price it higher, when in fact it appears not to.

Sandra M. Harman
4.0 out of 5 stars Awesome addition to my kitchen
Reviewed in the United States on October 18, 2018
Verified PurchaseEarly Reviewer Rewards(What's this?)
Love the fact that most anything can be cooked in this one pot. Love the fact I was able to empty my kitchen of 2 slow cookers, 1 pressure cooker, 1 rice cooker, and one steamer because of the awesome versatility of this cooker. I am eating healthier because I don’t mind the minimal preparation and cook time and then have only one pot to clean. Only minimal negative some of the .function buttons are a bit difficult to understand. Including the glass top with the pot is a real benefit. Many of the pots this has to be purchased separately.
Read more
33 people found this helpful
Helpful
Comment Report abuse

Rich
5.0 out of 5 stars Try it. It is actually works.
Reviewed in the United States on October 26, 2018
Verified Purchase
Remember life before a microwave oven? Then you finally bought one and wondered how you ever got along without out one. I'm feeling the same way now. I bought Cosori 6 qt. and tried to make stew in it last night. I did my own thing and put some stuff in it and pressed the stew button. 30Mins came up on the clock so I extended it to 50Mins. Pressed start and away it went. 6-8 mins to build pressure and 50 Mins cook time. so 58mins later I dished it up and sat down and tasted it. The meat fell apart. This took me 8 hours in a crockpot. I was impressed. It actually works as advertised. I recommend it 100%.
Read more
23 people found this helpful
Helpful
Comment Report abuse

Nanette Zawistowski
4.0 out of 5 stars Fast and easy meals
Reviewed in the United States on November 5, 2018
Verified Purchase
I have made to date, ribs (SOOO TENDER) and a chicken/rice dish.
Both came out wonderful and in fraction of normal time.
Unit seems well made....easy to clean.
Until I learn the machine a bit better......I Do wish I knew where to go for more recipes.
More as a guide of functionality of cooker, til I am comfortable with all settings, etc..
Recipe book sent with cooker limited. (Didn't give a five....more because of the learning curve, my limitations on use, for now).
I am very happy with the cooker and look forward to learning it well....hoping to use (if not daily) several times during week. Tasty, Easy and fast meals makes this busy lady very happy.
Read more
17 people found this helpful
Helpful
Comment Report abuse

Lindsay S.
5.0 out of 5 stars Amazing instant pot with stainless steel insert!!!
Reviewed in the United States on November 5, 2018
Verified Purchase
This instant pot is amazing! First of all, it's the only pot I've found with a stainless steel pot. I refuse to use non-stick not knowing what chemicals are used in the material. Second, it cooks and keeps things warm like a dream. I make a lot of chicken stock on a regular basis and after one batch in the instant pot, I can't believe I ever used a regular pot on the stove. Six hours in the pot and the stock, and chicken too, blew us all away with its rich, deep flavor. The stainless insert is easy to clean too. I can't wait to try out all of the other features and start using the pressure cooking option.
Read more
12 people found this helpful
Helpful
Comment Report abuse

MacGyver
5.0 out of 5 stars Impressive unit
Reviewed in the United States on October 4, 2018
Verified Purchase
I am really impressed with the removable inner pot. It's very good quality, stainless steel and a nice thick base. It's like a good quality sauce pan. The extra gasket is a nice bonus too and the glass lid makes it usable as a crock pot as well. I will be replacing at least 3 other appliances with this unit.. It seems very user friendly. I had my first dish of rice cooking within 10 minutes of opening the box.
Read more
14 people found this helpful
Helpful
Comment Report abuse

K Larson
4.0 out of 5 stars Useful tool for kitchen
Reviewed in the United States on October 13, 2018
Verified Purchase
I really like the stainless steel liner in the pot. I used it to make chili which was easy, using the saute/browning, pressure cooking and slow cooker functions and it turned out tender and tasty. The only thing I think needs improving are the marks on the lid indicating lock and unlock on the pressure release valve. These marks are black and blend into black lid, making it very difficult to read. This cooker was super easy to clean and I can't wait to try yogurt tomorrow.
Read more
9 people found this helpful
Helpful
Comment Report abuse
See all reviews from the United States

Page 1 of 1 Start overPage 1 of 1
This shopping feature will continue to load items when the Enter key is pressed. In order to navigate out of this carousel please use your heading shortcut key to navigate to the next or previous heading.
Back
Next
Pages with related products. See and discover other items: slow cooker accessories, Best rice cookers for pasta, Best glass steamers for cooking, Best electric steamers for cooking, Best electric pressure canners for canning