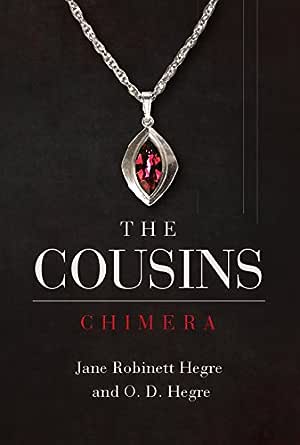 You've subscribed to THE COUSINS! We will preorder your items within 24 hours of when they become available. When new books are released, we'll charge your default payment method for the lowest price available during the pre-order period.
Update your device or payment method, cancel individual pre-orders or your subscription at
Your Memberships & Subscriptions
There was an error. We were unable to process your subscription due to an error. Please refresh and try again. 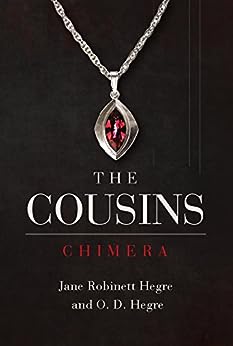 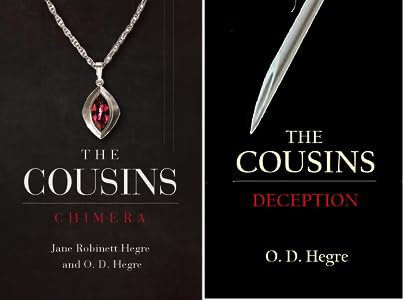 Jane Robinett Hegre worked as a dental hygienist for twenty-five years. When she wasn’t at work, she was indulging in her creative side as a potter, making beautiful and unique earthenware for her loved ones. For nearly ten years, she worked with her husband and coauthor on The COUSINS: Chimera. She died before she could see it released.

O. D. Hegre is a former professor of cell biology and neuroanatomy at the University of Minnesota. Prior to retirement he continued his biomedical research program in the private biotech industry. He cowrote The COUSINS: Chimera with his late wife and is publishing it as a tribute to her.

Hegre also writes speculative fiction stories, which have been published both in print format and on the Internet. He lives in the Sonoran Desert of southern Arizona with his wife, Mileva, and two dogs, Maggie and Millie. --This text refers to the paperback edition.

Peggy Marrin
4.0 out of 5 stars New Meaning for Blood Relative
Reviewed in the United States on October 8, 2016
Many of your notions about ghoulish vampires are turned upside down in this contemporary Gothic novel. This is a tale of "beneficent vampires" who only euthanize the old who sincerely wish for death. The question at the heart of the work is "Why do vampires live so long, heal from injury so rapidly, and become resistant to most diseases while the humans suffer so greatly and die so quickly?"

In the beginning of the novel, we are introduced to Kathy, a dental hygienist, who regularly provides her compassionate services at an assisted living facility. No need for facelifts, the rejuvenating blood of the aged keeps Kathy young and attractive. This chimera thrives by helping herself to immunologically different blood, until she breaks the rule by feeding on a young person. That act initiates a disastrous downward spiral.

Three men are in pursuit this youthful chimera named Kathy. One is Jim Richardson, the Deputy Sheriff of Pima County, who doesn't abandon his girlfriend when he discovers that she practices hematophagia. The sheriff's acceptance does not seem so implausible when you discover that you too empathize with the half-human and half-other woman who is trapped between two worlds. The second pursuer is a Dr. Mark Edwards, a world renowned hematologist, who realizes that the regenerative factor in the vampire's salivary glands will be a priceless therapeutic commodity. The third pursuer, Girard Negrescu, is a suspiciously young Romanian whose motives for connecting with Kathy unfold over the course of the novel.

While Anne Rice fans will be pleased that some of the action takes place in France, this vampire resides in the unlikeliest of places, sunny Green Valley, Arizona. An alarming number of murders indicate that this is not your typical, sedate retirement community. Characters indulge in just enough red wine to keep the other addictive red liquid ever foremost in your mind. Vampire-like foreshadowing throughout the novel increases the tension and makes you question the real identity of every new character. Consider how this bar patron is introduced: "She smiled and leaned forward opening her mouth. She stretched the lush red vermillion border of her upper lip and ran her index finger along the bright while dentition. Then the woman jutted out her jaw and tapped along the lower band of sparkling teeth, her eyebrows rising with each tap." (262)

The chimera, who live for centuries, are able to read the minds of mortals, including the old who want to die. So too can the omniscient authors delve into the minds of all their characters. The tension in the plot increases as the writers reveal those motives sparingly over chapters.
"Cousins: Chimera" gives a whole new meaning to the phrase "blood relative." While cousins figure heavily into the plot, so do uncles. Dr. Edwards, the hematologist, who wants to capture the substance which makes vampires live more than ten lifetimes, is motivated in part to save his uncle, Dr. Johnson, Kathy's boss. Yet another more nefarious uncle is really pulling everyone's strings.

Time in the courtroom paid off for Scott Turow, while Dr. Orion Hegre "cut his teeth" in an anatomy lab. The laboratory process of creating chimeric DNA, or DNA created by the combination of at least two strands, sparked his imagination. His now deceased wife, Jane, kept his creative fires burning. He accessed his extensive background in hematology to establish a level of verisimilitude unexpected in Gothic fiction. If you want reality in fiction, you are in for a "hypovolemic" shock. But if you want to suspend your disbelief, this intriguing blend of science and folklore is the read for you.
Read more
One person found this helpful
Helpful
Comment Report abuse
See all reviews