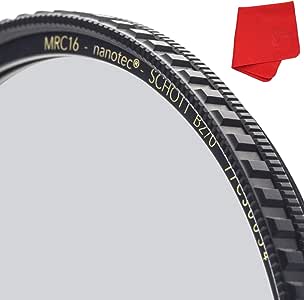 Visit the Breakthrough Photography Store
4.7 out of 5 stars 172 ratings
| 51 answered questions
Available at a lower price from other sellers that may not offer free Prime shipping.

The X4 CPL features SCHOTT Superwhite B270 optical glass, which is an ultra clear crown glass. It is produced by melting high purity raw materials and then made using the continuous draw process. The result is excellent transmission in the ultraviolet, visible, and infrared spectrums, and a high surface quality that accepts our state-of-the-art MRC and nanotec coatings exceptionally well.

4.7 out of 5 stars
4.7 out of 5
172 global ratings
How are ratings calculated?
To calculate the overall star rating and percentage breakdown by star, we don’t use a simple average. Instead, our system considers things like how recent a review is and if the reviewer bought the item on Amazon. It also analyzes reviews to verify trustworthiness.

Tim C
5.0 out of 5 stars Gobe 3 Peak (Schott) vs Breakthrough Photography X4
Reviewed in the United States on December 31, 2017
Verified Purchase
TL;DR: X4 if you have the money or NEED the best. Gobe if you're willing to correct white balance in post.

After recently deciding to buy a CPL for my camera, I whittled the available options down to two -- Gobe 3 Peak (Schott), and Breakthrough Photography X4.

On paper, the Gobe has the same specifications as the X4: Schott B270 Glass and 16 layers of coating.

The X4 boasts that it's coatings are unlike any other, and that it is able to capture the highest level of sharpness while maintaining perfectly neutral colors. Many comparisons have shown that the X4 is top dog against all the major players. However, I could not find a direct comparison against Gobe and hence decided to give both of them a shot myself.

Sharpness: I could not find any significant difference in sharpness between the Gobe and the X4. They are both spot on and do not appear to affect sharpness in the least.

Colors: The Gobe definitely shoots "warmer" than the X4. The X4 comes out neutral as advertised. If you seeking out-of-camera accuracy, the X4 wins hands down. However, the Gobe is only SLIGHTLY off, and it can be corrected in a single Spot White Balance click in your post processor of choice. Since most serious photographs will do some amount of post processing anyway, this is not a huge deal. I don't think the average amateur would even notice the difference without a side by side comparison, anyway.

Polarization: Both filters were very effective in removing glare in my tests. I could not find a significant difference between the two.

Production quality: Both filters are quality products, but the X4 wins here again. The grip portion of the X4 sticks out much further and it easier to screw on and off as a result. The Gobe is much more likely to get stuck on a lens with its design.

Extras: The packaging of the X4 was surprisingly hard to open and seems that they tried too hard to make it seem "nice". The amount of jostling that it took to separate the box parts was excessive considering that there is a $160 piece of glass inside it. Gobe on the other hand uses modest packaging and also plants trees with the money they make from their products.

Final opinion: The X4 is the better product but, for me, it is not worth the extra $100 that I could instead spend on adding ND filters to my collection. If money is no object or you demand the best, get the X4. If you don't mind a touch of white balance correction and a slightly lesser product in general, get the Gobe.

I have included some pictures of my tests. In all pictures, the order is: No filter, Gobe, X4. The car is demonstrating the polarization, and the text is a 100% crop to compare the sharpness.

Laura L. George
3.0 out of 5 stars price vs performance seems skewed heavily towards price.
Reviewed in the United States on July 15, 2018
Verified Purchase
In anything but the fully polarized position pretty much neutral color hue but wasn't expecting such a hard shift when even slightly less-than-full-polarized.--I feel like it was objectively much worse than my B+W kaes and Hoya HD pro when compared side-by-side. Based on this and the price performance (There are more affordable cpols out there that don't maybe have as perfect a neutral color cast but have the same clarity with my A7RIII and maybe a tiny bit less build quality, so this just feels like not a great monetary value and I'm left less than enthralled and feeling a substantial buyer's remorse).--I'm going to have to keep it since I was out of the country for three weeks and it was too late to return it (on me not Amazon or the seller).
Read more
11 people found this helpful
Helpful
Comment Report abuse

Tracy Rose
5.0 out of 5 stars Amazingly sharp and true in color, and the customer service is outstanding!
Reviewed in the United States on September 4, 2018
Verified Purchase
I would rate 10 stars if I could. I have a pile of Hoya filters, been dedicated to buying them for years, so this purchase was a stretch for me. I read the Breakthrough filter reviews, and I had to see if they're as good as they say they are. And WOW! I was amazed how true the color capture was, and how sharp images are with the Breakthrough X4 CPL.
I didn't have to do any unnecessary color correction. Great filter!!
And on top of all this.. their customer service is first class. The first CPL I ordered had a very small nick on the glass, and customer support was on it right away. I received an email from the owner, Graham, saying a new one would be shipped right away and he even threw in a lens cap, and a prepaid label to send the first one back. I'm so jazzed to find this company, and looking forward to adding the Breakthrough ND filter to my gear bag.
Read more

Amazon Queen
1.0 out of 5 stars Liar liar pants on fire!!!
Reviewed in the United States on October 29, 2019
Verified Purchase
I purchased this filter a year ago, so I can’t return it. It was advertised as a circular polarizing filter. Now, I am not always the sharpest tool in the shed, and when I see the product description say “circular polarizing filter” I assumed it was referring to its polarizing properties and not its shape. However, after a year of not getting the desired results I decided to find out for sure If it was linear or circular. I tested it by holding it up backwards to a mirror to see if the lens would turn black. Nope! But I still doubted myself. So I took it to my local photography club and showed it to several members who “know their stuff”. They confirmed my suspicion. Indeed, it is linear! This filter is very expensive. I would have received more happiness by lighting a match to the money instead of realizing a year later I had been cheated. If all you want is a linear filter then by all means buy this one. But if you want circular - DON’T BUY THIS ONE!!
Read more
4 people found this helpful
Helpful
Comment Report abuse
See all reviews

Page 1 of 1 Start overPage 1 of 1
This shopping feature will continue to load items when the Enter key is pressed. In order to navigate out of this carousel please use your heading shortcut key to navigate to the next or previous heading.
Back
Next
Pages with related products. See and discover other items: filter for camera