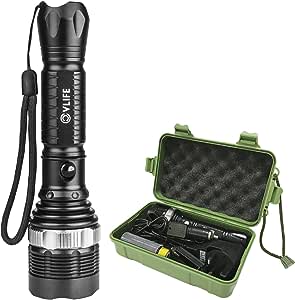 by CVLIFE
4.0 out of 5 stars 477 ratings
| 31 answered questions
Currently unavailable.
We don't know when or if this item will be back in stock.

4.0 out of 5 stars
4 out of 5
477 customer ratings
How does Amazon calculate star ratings?
Amazon calculates a product’s star ratings based on a machine learned model instead of a raw data average. The model takes into account factors including the age of a rating, whether the ratings are from verified purchasers, and factors that establish reviewer trustworthiness.

olblueiiii
5.0 out of 5 stars I had no problems with mine.
Reviewed in the United States on July 26, 2013
Verified Purchase
Unlike some reviewers, my flashlight arrived in a sealed box and had not been used. One reviewer said that their flashlight would not work when disconnected from the charger so they sent it back. At first, mine wouldn't work when disconnected from the charger either. So I unscrewed the tail cap and discovered the battery was still wrapped in plastic. Once I removed the plastic, inserted the battery + end first and replaced the tail cap, the light on the charger showed a red-orange color indicating it had begun to charge. As the flashlight charges, the charger light gradually changes from red-orange to yellow and finally to green, indicating a full charge. The flashlight is very bright and can be adjusted from flood to spot by turning the silver ring near the front of the flashlight. The pattern of light at the spot setting is square. This is because the LED that emits the light is square. It's different, but it's fine. Another reviewer sent their flashlight back because they said their switch had no option for medium power, low power, strobe or SOS. They said their switch allowed only full power and off. Since there is no instruction manual with the flashlight, some people might not know how the switches on these LED flashlights work. You depress the switch fully to turn it on at full power, then you can press the switch part way to toggle through medium power, low power, strobe and SOS and back to full power. Depress the switch fully to turn it off. Also, the switch has a timer. So lets say you have toggled the switch to low power and then turn it off. If you turn it back on within 20 seconds or so, it will come on in strobe mode, which is the next mode after low power. Likewise, if you turn it off while it's in strobe mode and then turn it back on within 20 seconds, it will come on in the next mode, which in this case would be SOS. If the flashlight remains off for more than 20-30 seconds, it will always come on in full power mode regardless of what mode it was in when you turned it off. The exception is full power mode. If you turn the flashlight off while it's in full power mode, you can turn it back on without having to wait for 20 seconds and it will still be in full power mode.
The flashlight is solidly built. The only part that worries me a little is the soft plastic plug that covers the charger input hole on the side of the flashlight. It feels like it could pull out or break off and be lost. I'll try to be gentle with it. Yes, the chargers look and feel cheap, but they work fine, and hey, remember, it's an inexpensive flashlight.

art kings
5.0 out of 5 stars yes it is another Chinese flashlight ... from Huihaozi
Reviewed in the United States on March 4, 2014
Verified Purchase
No it isn't complete crap...in the long run; Me and this flashlight have had a rather tumultuous relationship.

When I first purchased it I was extremely pleased, this light had outshined most all of my previous flashlights and was definitely much more durable. The included chargers were definitely a selling point but ended up being its main flaw. like most Chinese flashlights the lumen rating is way above the manufacturers rating for the lighting element it uses but that is of little importance since It is super bright.

the car charger, while handy served its function only when charging a battery that was only 25% depleted, and the wall charger was of such poor construction that it fell apart in two months.
I ended up using it for three months during the first round of use and had suspected that the led element was worn out when the flashlight could no longer throw a strong beam.
I ended up setting it aside and even tried dumping it on friends every chance I got. I had suspected that the issue could have also been my form of charging and possibly the cheap battery inside and maintained that the flashlight could be bullet proof with new batteries but I abandoned this position when I couldn't find 18650's, I tried loading two cr123a at a friends suggestion which resulted in some flickering before extinguishing itself.
I am a bit of a pack rat so in the drawer it went for a couple of months. I came across another friend who had a Moded vaporizer that ran on 18650s and took one of his extra batteries to try it in my flashlight, sure enough it fired up and lit like it used to

SigDigitTop Contributor: Camping
4.0 out of 5 stars Great for general use, not tactical
Reviewed in the United States on March 4, 2017
Verified Purchase
Very bright little light that came with all the charging accessories you may need, and an orange wand for directing traffic, which is why I purchased it. Do NOT recommend for tactical work, as it lacks momentary on/off type switch. Also, every time you turn it off and then back on, it switches to the next operating mode, in the order of high, med, low, flashing slow, flashing fast. I found this method of changing operating modes to be annoying and unsuitable for tactical use. But for a bright, small, versatile, rechargeable and long lasting light in a nice little cushioned case, it is well worth the very reasonable cost.

**Edit: Noticed the latest iteration does not include the orange traffic wand. That's too bad, it was the main reason I bought it.
Read more
One person found this helpful
Helpful
Comment Report abuse

Gaffs
5.0 out of 5 stars Works well for me
Reviewed in the United States on December 18, 2017
Verified Purchase
Great product. I bought 3. My 2 son's are tow truck drivers. Their shifts are graveyard & swing so they work in the dark. They are pleased with their lights, they are great for spot work . One light was run over but looks and works good. Being rechargeable is awesome. I may have to buy my sons a second light as long continued usage over several hours will drain the battery. Awesome light for my home use . No street lights here so this is an awesome light when I have to go out back after dark. Good product glad I got one..
Read more
Helpful
Comment Report abuse

J. Adams
5.0 out of 5 stars 1800 Lumen Flashlight
Reviewed in the United States on October 2, 2013
Verified Purchase
It works almost as good as I expected. Not quite as bright flooding as I thought it would be, but is is pretty bright. I liked the fact that it also includes a battery holder so you can also use standard AAA batteries with it should the included 4.5V battery ever stop charging rendering it useless unless another expensive battery is purchased. The holder is not pictured so I thought I would mention that. Capabilities also with a car charger as well as the 110v charger is an added plus. With both chargers and the extra battery holder means you will always have an alternative power source. The zoom feature is also handy from a spot type light to a flood type light. All in all a good flashlight yet compact in design. I would put up against the popular mag light any day plus the recharge capabilities make it surpass a mag light in a handy small flashlight. Oh and I charged mine up two weeks ago and it's still fully charged. Then again I only use it a few minutes each day.
Read more
One person found this helpful
Helpful
Comment Report abuse
See all reviews from the United States
Pages with related products. See and discover other items: lumens led light, police flashlight