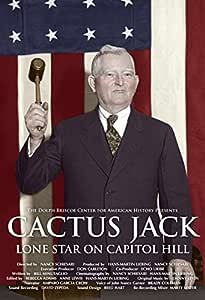 Cactus Jack: Lone Star on Capitol Hill reveals the rollicking saga of one of the most powerful but often forgotten figures in U.S. history John Nance "Cactus Jack" Garner (1868-1967). The program charts Garner's extraordinary life, from his humble roots in Blossom Prairie, Texas, to his 38-year tenure on Capitol Hill where he wielded power as Speaker of the House during the darkest days of the Great Depression. Garner ran as a presidential candidate at the 1932 Democratic Convention and twice served as vice president to Franklin D. Roosevelt. Cactus Jack offers insights into this brazen political dealmaker who helped reshape the Democratic Party and push through New Deal legislation. Cactus Jack: Lone Star on Capitol Hill opens new chapters in U.S. history and provides vital clues to the way our nation does business today.

About the Film: Cactus Jack: Lone Star on Capitol Hill brings to life one of the most powerful but often forgotten figures in U.S. History John Nance "Cactus Jack" Garner (1868-1967). The poker playing, bourbon-sipping Garner grew up in a tiny northeast Texas town and went on to become one of the most influential politicians in Washington's corridors of power. During his two terms as Franklin D. Roosevelt's vice president, he completely reshaped the office, becoming an uncompromising architect of major American policy and a notorious backroom dealmaker without whom FDR would not have been able to enact his controversial New Deal policies.

But then Cactus Jack went to war with his own boss and embarked on a bruising split with FDR over the president's controversial attempts to overhaul the U.S. Supreme Court. In one final, breathtaking reversal, Garner tried to defeat FDR and seize the Oval Office himself. When FDR was re-elected for a third term, Garner packed his bags for Texas and swore that he would never cross the Potomac again.

Garner was born in the horse-and-buggy era and lived until the Space Age. He was a wily Congressman and a commanding Speaker of the House and a political godfather to Lyndon Baines Johnson, Harry Truman and John F. Kennedy. He was mercurial and contradictory: He was anti-Wall Street but profoundly anti-union. He boosted the New Deal before he angrily turned against it. He touted massive government-funded projects but was deeply wary of social welfare. On his 95th birthday there would be one more poignant reminder of Garner's legacy on Capitol Hill. On Nov. 22, 1963, the last phone call President John Kennedy made before getting into the fated motorcade was to wish the Democratic Party elder a happy birthday.

By shining a light on the brazen political strategies of Garner, Cactus Jack: Lone Star on Capitol Hill opens new chapters in U.S. history and provides vital clues to the way our nation does business today. "The history of the modern vice presidency really begins with John Nance Garner," says historian and executive producer Don Carleton, "but he's been largely ignored, because he doesn't fit within the clichéd assumptions held by many about the New Deal." "You could argue that much of what FDR accomplished would never have occurred without Garner," says presidential biographer Bill Minutaglio, who helped research Cactus Jack.

A Look Back at a Colorful Texas Politician

Donald Trump might have enjoyed his friendship and Barack Obama might have invited him to the White House. After all, he guzzled whiskey, chain-smoked cigars, played cards until late at night, wore a cowboy hat and served as the Vice President of the United States from 1933 to 1941.

Fellow Texans and longtime Democrats might still remember the name and the legend of John Nance Garner, but American voters have largely forgotten him and the pivotal role he played in Washington D.C. during the Great Depression. Now, a sixty-minute documentary about him, Cactus Jack: Lone Star on Capitol Hill, airs on PBS.

Archival footage and snappy interviews with Lone Star State historians recreate Garner s colorful life, from his birth in Detroit, Texas in 1868 until his death in Uvalde, Texas in 1967, just fifteen days shy of his 99th birthday.

Cactus Jack would be a welcome documentary in any year, but especially in 2016, when American citizens go to the polls to choose a new president. Directed by Nancy Schiesari, written by Bill Minutaglio and produced by Don Carleton at the Briscoe Center for American History in Austin, Texas, Cactus Jack shows that politics does indeed make for strange bedfellows, that power can corrupt and that before the coming of LBJ, George Bush and Senator Ted Cruz, Texas politicians shaped the political contours of the nation.

The film traces Garner s intimate relationship with Mariette Rheiner, the daughter of a rancher, whom he married in Sabinal, Texas in 1895 and who accompanied him to Washington, D.C. where she worked as his private secretary and de facto chief-of-staff, while he served in the House of Representatives from 1902 to 1933. No politician ever had a more loyal or more loving assistant.

These days, Capitol Hill doesn t operate in the same way it did then, and Vice President s don t say the kinds of things in public that Garner said. The Vice Presidency, he complained, was not worth a bucket of warm p*ss.

Cactus Jack offers a sympathetic portrait of an old-fashioned, back room politician, but it doesn t idealize him or gloss over his deep-seated conflicts about policy and power with President Franklin D. Roosevelt. At its best, the documentary takes a long, close look at the social divisions in America during the crisis of the Depression, when extreme problems called for extreme solutions.

By the end of the film, one wonders where Garner would stand today and whether he d be a Democrat or a Republican. Still, you don t have to be a member of a major political party or even a Texan to enjoy this fast-moving documentary that looks at the recent past and prompts viewers to wonder how much or how little progress we ve made as a nation in the past seventy-five years.

Surely, Vice Presidents don t drink as much whiskey or smoke as many cigars these days as Garner did in his heyday. They probably don t employ their wives, either, at least not as visibly.

Jonah Raskin, roams the wide-open spaces of Texas and writes about politics and culture for magazines and websites. --Jonah Raskin, Huffington Post

Produced by the University of Texas at Austin's Dolph Briscoe Center for American History and made possible by funding from the U.S. Institute of Museum and Library Services and the Center's Briscoe Endowment, the film documents Garner's life from his upbringing in small-town Texas to his tenure as Speaker of the House of Representatives and focuses on his two terms as Franklin D. Roosevelt's Vice President. The film was directed and shot by Nancy Schiesari (Tattooed Under Fire, Hansel Mieth: Vagabond Photographer); edited by Anne Lewis, Rebecca Adams, and Hans-Martin Liebing; written by Bill Minutaglio; executive produced by Don Carleton (When I Rise); co-produced by Echo Uribe; and produced by Nancy Schiesari and Hans-Martin Liebing.

There are 0 customer reviews and 1 customer rating.
Pages with related products. See and discover other items: cactus jack