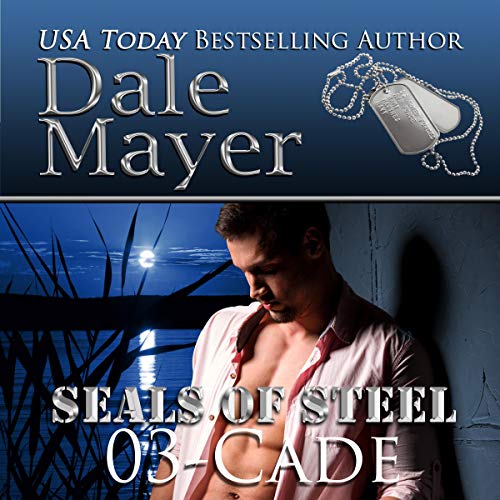 Cade Terence, a former SEAL, has spent the last two years physically recovering when his unit’s truck drove over an antitank landmine. Six other teammates were also badly hurt, the seventh dead, in what their team leader Badger Horley realized later had to be a trap set to take them out. The father of Laszlo, a member of his unit, was in a hit-and-run. Investigating this accident leads Cade and other members of the team on a trail with very definite connections to the original incident that nearly got him and the entire squad killed.

Faith Halladay is a commercial airline pilot. When her best friend Elizabeth is in a serious accident that leaves her in a coma and threatens to steal her life, she rushes to Norway to sit vigil at her bedside. There, she meets Cade, who asks all sorts of questions about the accident that she can’t answer. The attitude Elizabeth’s family displays when they lose hope that their daughter will survive stuns Faith, leading to a heated confrontation.

Cade’s endless questions now have her asking her own. She reconnects with him, only to discover that her relationship with Cade has put her in a killer’s sights, and the nightmare that’s become his world is now her own.

Author note: For your listening pleasure, this series must be listened to in order.

Janice anzaldo
5.0 out of 5 stars good good good
Reviewed in the United States 🇺🇸 on September 23, 2022
Verified Purchase
Another excellent story where seals are hero’s and romance is thriving. So many goods stories of men who served our country.
Read more
Helpful
Report abuse

D. Harley Jean Matta
4.0 out of 5 stars Pretty good
Reviewed in the United States 🇺🇸 on June 5, 2018
Verified Purchase
I was kindly provided this book as an ARC; in exchange for my honest review. CADE - SEALs of STEEL is book 3 of Ms. Dales “new” series. Since can’t do 1/2 stars is gave a full “4” star rating as I felt wouldn’t be fair to rate “3”. I will reiterate as usual it will assist you to read SEALs of Honor and Heroes for Hire books in order to fully understand all the characters & nuances. This book centers around Cade & Faith; and the evolving story as to who/what happened to Cade’s SEAL team when they were ambushed by an IED in Afghanistan. For this series it is critical to read the books in order (worth it).

Cad’s SEAL team were all critically injured (loss of limbs, burns, lac’s, etc) & one man “Mouse” died. They’re investigating the incident as it appears someone in the military intentionally set up they’re team. This book begins where book 2 left off. The remaining team members (with the exception of Badger) have just returned to New Mexico after going to Afghanistan to review the accident site & question the locals for any witnesses.

Cade meets Faith when they meet at curbside at the airport & the team decides to share a cab with Faith. (A funny side note - I’m unsure how four really big guys, Faith & driver all fit into a cab...) 🙃

The team began discussing another team member (not with them) because his best friend had been killed by what had been assumed to be a random hit-and-run accident. They begin to question if the recent accidents involving there families & close friends were truly accidental.. Several members of the team fly to Norway because Lazlo’s father had been hit by a car while walking his dogs, but unlike the others he’d survived. End result was the team discovered that these were not accidents but intentional hits. There were side stories that almost caused confusion and I’m truly not sure in the end why they were included (my opinion only). I wasn’t really sold on the relationship between Cade & Faith. Truly it seemed to me Faith was not a necessary part of the story. Overall it’s was an entertaining read, but I felt it could use a little more tweaking.
Read more
Helpful
Report abuse

Linda Carlson
5.0 out of 5 stars These just keep getting better!
Reviewed in the United States 🇺🇸 on June 6, 2018
Verified Purchase
What a fabulous series! The SEALS of Steel are HOT!! Cade is the third book in this exciting new series! Eight men in their military truck were blown up by an anti-tank mine. One died, the remaining seven are severely injured, missing limbs and very slow to heal. Suspicious that the blast was intentional, these men are determined to find answers. Cade and a couple of his buddies travel to Norway to check on fellow SEAL, Lazslow, whose family is not well and end up meeting sweet, beautiful, Faith, a commercial airline pilot.

What a wild ride this story has turned out to be! I just love the brotherhood and support Cade and the guys from his Unit have as well as the support received from other active and non-active military units. They are as close as any family can get and all have similar injuries and painful memories.

I love the empathy in this story. Faith’s best friend, Elizabeth, has suffered injuries in a horrible car accident and is in a drug induced coma so her body can hopefully heal, but her chances of survival are slim. Faith is constantly at Elizabeth’s bedside giving her encouragement to hang on.

This story has such sweet, touching moments. So many people who are suffering have a built in support group of their friends that understand their situation and their pain. It also slams you into a cold harsh reality of murder and unbelievable hate that people can feel towards one another. It’s hard and gritty in its intenseness when these men are looking for answers into the automobile related accidents that seem to be too coincidental as well as the circumstances surrounding the bombing. It also gives you hope that we all wish for someone to care enough to be at our side in support and sympathy when we would need it the most.

And there is the hot, sexy attraction between Cade and Faith that they don’t even try to deny. A fast paced, fantastic story that you can’t put down! I’m excited for book 04! Excellent job! I loved it!
Read more
Helpful
Report abuse

wendy s hodges
5.0 out of 5 stars like a gentle tease
Reviewed in the United States 🇺🇸 on June 5, 2018
Verified Purchase
The suspense continues to build in this 3rd part of this series, more information is gradually coming forward. Also things that were thought to be unlucky events could possibly be a lot more suspicious. I am loving these books, each one moves the guys investigation a little further on without giving to much away in each book, like a gentle tease. In this one Cade also meets someone a bit special but who is dealing with some upsetting problems of her own. The tension and some sadness combine to keep you intrigued and hooked into the story, this plot has been written like a giant novel that is broken down into segments, that means as each ends you cant wait to jump straight onto the next. I do have an inkling into who the bad guy may be, but I could also be completely blindsided by the author when we do find out, again that is no bad thing as I'm more than happy to be surprised. I will say to anyone looking to read these books, it is one of those you need to start at the beginning Badger and work through in series order. The plot runs throughout so you will miss vital events or information if you skip or miss any, then what's happening will not make any sense and be confusing. Dale Mayer I am ready bring on the next book please.
Read more
Helpful
Report abuse

Gartland
5.0 out of 5 stars Good Book
Reviewed in the United States 🇺🇸 on February 22, 2022
Verified Purchase
The plot has a good pace. The characters are interesting, intelligent, & people it would be nice to know. I've enjoyed this series.
Read more
Helpful
Report abuse
See all reviews

mrs c
5.0 out of 5 stars Good read I couldn’t put it down
Reviewed in the United Kingdom 🇬🇧 on June 26, 2018
Verified Purchase
Good read I couldn’t put it down, the author got me on 1st page till the end . It’s good escapism only problem is can’t wait for next book as the storey is linked in the series to who is affecting the unit . I recommend these books .
Read more
Report abuse

Fluffyfangs
5.0 out of 5 stars So good third book down
Reviewed in the United Kingdom 🇬🇧 on September 20, 2019
Verified Purchase
Wow what read this series just grabs you and won’t let you go. Strong heroic men and feisty women coming together to live and heal. So engaging and hot
Read more
Report abuse

Kindle Customer
5.0 out of 5 stars Great reading
Reviewed in the United Kingdom 🇬🇧 on June 11, 2018
Verified Purchase
I do love my sexy seals but these seals of steel books are not only filled with sexy seals but are great thrillers as well
Read more
Report abuse

Kindle Customer evelyn lawrence
5.0 out of 5 stars Review
Reviewed in the United Kingdom 🇬🇧 on September 2, 2018
Verified Purchase
Another very very good story this author certainly knows how reel in her readers ,gets up hooked and wham you r there
Read more
Report abuse

mrs C. Arnett
5.0 out of 5 stars Top story from a top notch author.
Reviewed in the United Kingdom 🇬🇧 on July 7, 2018
Verified Purchase
Enjoyed book it was as good as expected from author of dale Meyer's ability. Keep them coming
Please.
Read more
Report abuse
See all reviews