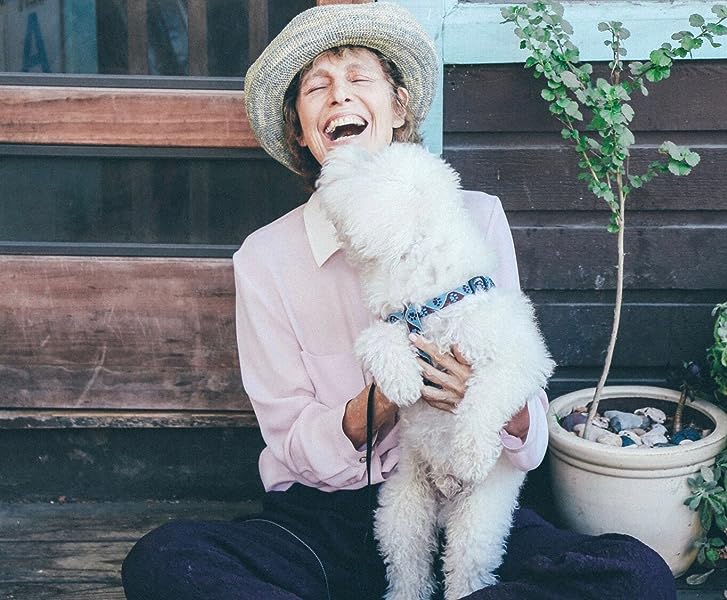 by Jane Marla Robbins (Author)
5.0 out of 5 stars 11 ratings
See all formats and editions
Sorry, there was a problem loading this page. Try again.

These poems, like the café it celebrates, and the people who hang out there, are variously funky, funny, serious, original, alive, cozy, smart, silly, insightful, fantastical, spiritual, inspiring, well-crafted and celebratory.
Read more
Previous page
Next page

“The poetry is playful and moving. It resonates with the earnest search for, and finding of love and nurturing. The book is wonderful.” - Megan Rice, author of Black Mountain College: My Creation Myth and The Art of Mothering

“Jane Marla Robbins, poet and Topanga shaman, journeys her readers, as the cafe does its regulars, out of their hunger and loneliness and into fullness and happiness. The poems are elegantly crafted, smart and deep.” -Peter Angelo Simon, photographer, author of Big Apple Circus and Muhammad Ali Fighter’s Heaven 1974

“These are poems of Place, composed with deceptively perceptive observations, which makes them a pleasure to read.” -Michael C. Ford, author of Language Commando, Grammy nomination

“The writing is nourishment. And moving. I want to go to the cafe — although I feel that I have already been there.” -Pamela Shaw, actor, Lucky Stiff and The Whistleblower

“Throughout Cafe Mimosa in Topanga Jane Marla Robbins reminds us we’re all lucky enough to have places in our lives that rise from the prosaic to the poetic. It’s a place we all need.” -David Finkle, author of People Tell Me Things and The Man With the Overcoat

“Reading Café Mimosa in Topanga, even for someone three-thousand miles away, is almost like sitting there, in a cozy spot, nursing a coffee, gazing at the paintings and other items of interest on the multi-colored walls, while keeping one’s eyes peeled for the regulars that are the heart and soul of this magical oasis in a desert canyon.” -Jimmy Roberts, poet, The New York Times, composer I Love You, You’re Perfect, Now Change

“The poems are thoughtful, provocative and inspiring. I loved this book.” — Patricia Bosworth, Vanity Fiar contributing editor, author of The Men in My Life.

A finalist for a Poetry Grant from the National Endowment of the Arts, Jane has written four books of poetry: the best-selling Poems of The Laughing Buddha; Cafe Mimosa in Topanga (winner of the 2018 South California Book Publicist Poetry Award); Dogs in Topanga 2000-2018; and POEMS OF COVID-19, Stuck in Lockdown: The First Three Months.

Commissioned by the Kennedy Center in Washington D.C. to write and perform the one-woman play Reminiscences of Mozart by His Sister, Jane also performed it at Lincoln Center in New York. Her one-woman play Dear Nobody, co-authored with Terry Belanger, was nominated for an Obie, ran for a year Off-Broadway, was produced on CBS, and toured to London and all over the United States. In New York she also starred in her three-character play, Jane Avril, now being translated into French for a production in Paris.

Her self-help book, ACTING TECHNIQUES FOR EVERYDAY LIFE: Look and Feel Self-Confident in Difficult Real-Life Situations, won the Gold Axiom Business Award. Jane teaches the techniques at universities and corporations, and coaches privately. She has acted in movies (Rocky I, II, V, Arachnophobia); on TV (ER, The Heidi Chronicles); on Broadway (Richard III, Morning, Noon and Night); and was the Clown Ringmaster in Circus Flora.

Jane can be seen on YouTube reading excerpts from

POEMS OF THE LAUGHING BUDDHA (https://www.youtube.com/watch?v=eIYv7mIwIq0);

CAFE MIMOSA IN TOPANGA (https://www.youtube.com/watch?v=uCFQwXny6gY); and

Lena Rivkin
5.0 out of 5 stars Postcards from Topanga
Reviewed in the United States 🇺🇸 on February 21, 2018
Jane Robbin's collection of varied poems in Café Mimosa in Topanga is like a travel guide for anyone considering a fact-finding poetic tour of culture in Los Angeles and The Valley. It is a sociological expedition with all flags flying and all sensors activated. This stream of consciousness and a work of impressive craft is rendered through lenses of varying hues and densities. They all render the artistic life in Southern California as a celebration of the media-infected, the bold, the beautiful, and the sensitive. These poems are crafted in wonder and presented with vigor. As a painter, I salute Robbins for having created vibrant and uniquely personal paintings with her words in this magical café. And I love the creative, charming and very clever cover!
Read more
Helpful
Report abuse

Susan James Berger
5.0 out of 5 stars As Delicious as a box of Chocolates
Reviewed in the United States 🇺🇸 on October 6, 2017
This is a slim volume of poems and that's good because many are as rich as a chocolate truffle. A few are as light as meringue. And all of them are filled with loving observations of the world around her. They have given me a yearning to visit the Cafe Mimosa and see for myself the people and things she describes.
Poetry is not my usual read, but this was quite wonderful.
i could not resist lines like
"this place gives birth to all, inspires,
nourishes, feeds,
to the quiet, metronomic tap dance of computers."
Yup, I need to go and taste the avocado zucchini soup and drink in the company. Thank you, Ms Robbins.
Read more
Helpful
Report abuse

The Crystal Focus
5.0 out of 5 stars Her little slice of heaven
Reviewed in the United States 🇺🇸 on January 7, 2018
This is a wonderful book of poems that will keep you entertained until the very end! Jane transports you to her little slice of heaven where she lives, entertaining you with her beautiful, funny, insightful poems. Jane is full of wisdom and I'm grateful she took time to write this book and share it with the world. She also has another amazing book of poems called Poems of The Laughing Buddha, check it out also, you can't put it down.
Read more
Helpful
Report abuse