You've subscribed to Caged Duet! We will preorder your items within 24 hours of when they become available. When new books are released, we'll charge your default payment method for the lowest price available during the pre-order period.
Update your device or payment method, cancel individual pre-orders or your subscription at
Your Memberships & Subscriptions
There was an error. We were unable to process your subscription due to an error. Please refresh and try again. 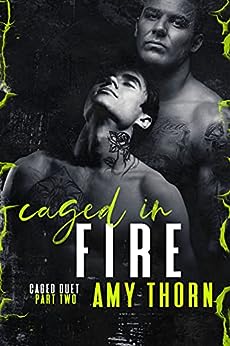 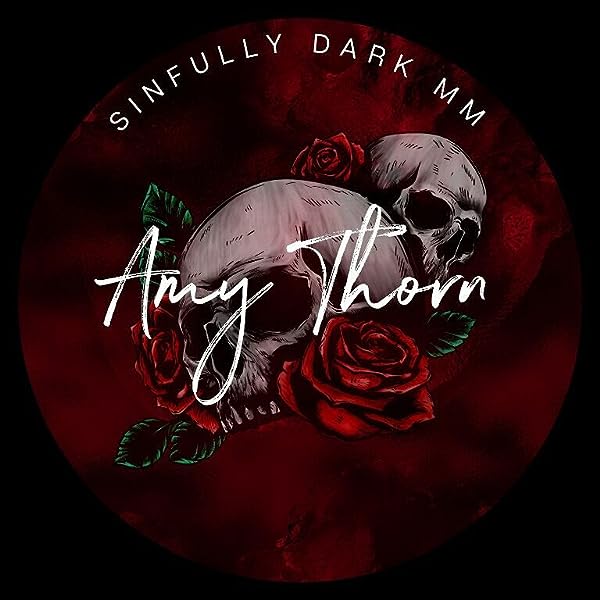 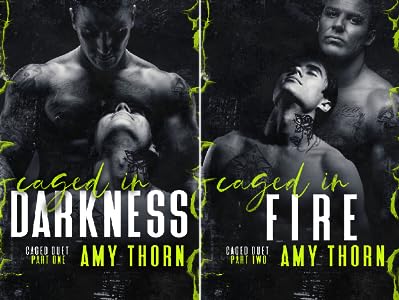 Linda Reads
VINE VOICE
5.0 out of 5 stars If you crave retribution for wrongs committed, you will love this book…
Reviewed in the United States on October 6, 2021
Verified Purchase
***Read the author’s warnings. This is important if you have triggers. Torture and assault on page. ***
This is the sequel to CAGED IN DARKNESS where both Thanatos and Isaac resided when they met. Through many trials they came to understand and care for one another. This is a very dark M/M romance between a hardened man 41yo Thanatos, President of the Black Death Riders MC and a younger (27yo) man, Isaac, recently booted out of the Army and looking for the brotherhood that the MC will give him. His brother Ethan is second in charge in the MC and because of what happened to Isaac in the Army, brought him into the fold to help him work through his trauma.
This book starts at the very moment the last book ended. Isaac had saved Than using his Army skills but couldn’t save himself. Let me just say, the most paralyzing moment for me occurred when I read how long Isaac’s agony lasted. Truly edge-of-seat storytelling with so much pain, disgust but finally a wonderful HEA. If you like M/M MC stories with darkness and bite, try this book. I volunteered to review an ARC of this duet through Gay Romance Reviews. So glad it ended with a satisfying resolution.
Read more
Helpful
Report abuse

Clara
5.0 out of 5 stars Rooting for Thanatos and Isaac
Reviewed in the United States on October 6, 2021
Verified Purchase
After the way Caged in Darkness ended, I needed to know what happened next. And while the first book was full of steam and raw attraction, Caged in Fire is all about emotions and depth. It perfectly shows how Than and Isaac feel. This story brought me to tears, more than once.

Amy managed to give a very personal and detailed account of what they go through. It's impossible not to root for them! Some parts of this story are super dark and harsh. Yet, they actually happen in real life. But Amy doesn't sugarcoat nor embellish them. The points come across and add richness and complexity to the story.

Isaac is much more tormented, angry and vulnerable. It takes all of Than's strength and determination to show Isaac that he is not damaged as he thinks. Thanatos becomes the most rational of the two, which sounds almost crazy if you have read the first book. If I'm honest, I like this Isaac better. I finally saw and understood him.

Caged in Fire is unpredictable and perfect. I highly recommend this duet, which makes impossible not to want to read more of Amy's books.
Read more
Helpful
Report abuse

Jen O'C
4.0 out of 5 stars Healing
Reviewed in the United States on October 20, 2021
Verified Purchase
Part two of Thanos and Isaac’s story is a story of healing. Isaac has been rescued but he is still a captive of his mind. Finding and punishing his captors has helped but having Thanos by his side will save him.
Read more
Helpful
Report abuse

_WhatJenReads_
4.0 out of 5 stars A Perfect, Yet Graphic, Ending to the Caged Duet
Reviewed in the United States on October 5, 2021
When we last saw Thanatos and Isaac in Caged in Darkness, Isaac had let himself be captured in order to save Than from the hands of the Damaris syndicate, and Caged in Fire picks up right where the first book ended. While Isaac is tortured physically, violated to the point of breaking, Than and the rest of the Black Death Riders stop at nothing to find their brother. But once they find him, Isaac will not be the same man he once was, and he won’t be the same lover Thanatos started falling in love with in Caged in Darkness. The road to recovery is long and treacherous, but both Than and Isaac, with the support of the Black Death Riders, find that they can ride that road hand in hand.

After waiting just over a month since the cliffhanger in Caged in Darkness, I was so happy for the release of Caged in Fire. I loved that the action picked up right where we left off in the first book; I know that, had both books been available when I started reading Caged in Darkness, I would have immediately downloaded the second book just to find out what happened after Isaac was taken by the Damaris syndicate. Caged in Fire was definitely darker than the first book. While we witnessed a lot of Thanatos’ demons in Darkness, Fire has both main characters struggling with their pasts and seeking retribution, Isaac for what was done to him physically and mentally while being held captive and Thanatos for what was done to his sister. The things that are done to Isaac while he’s held prisoner are graphic and may not be for everyone. These actions shape who Isaac is as a character and changes how he sees the world and interacts with his brothers in the Black Death Riders. The graphic acts are central to Isaac’s character development, but they are graphic nonetheless. The growth we saw in both Than and Isaac in Darkness was just the tip of the iceberg; both men really came full circle in this book. And, while Isaac’s main growth is self-contained within Caged in Fire, Thanatos had a wonderful arc that full spanned both books. The rest of the guys in the Black Death Riders definitely seemed to have less on-page time in this second book, but they were all still fully realized characters while remaining more supportive and more secondary to Than and Isaac’s journey. While exponentially more graphic in nature, I thoroughly enjoyed Caged in Fire and loved wrapping up Isaac and Thanatos’ love story.
Read more
Helpful
Report abuse
See all reviews

n young
5.0 out of 5 stars Amazing read!
Reviewed in the United Kingdom on October 7, 2021
Verified Purchase
Caged In Fire starts up right off where Caged In Darkness left us... Isaac is with the bad guys.. Than is lost and hurting even more than normal waiting on news on Isaac so they can get him back.
Straight into the drama.. the darkness.. the broken way they all are now.. the emotional scenes that play out while we are reading can't help but shatter you're heart and make you life it right along beside them all.
I loved the way these guys are together is beautiful.. seeing them both drop their defences and be there for each other was amazing.. they are both strong alpha men so trying to find their own place in their relationship was eventful for sure!
I devoured this story and didn't want it to end. Would read more and more not only about these pair but about the whole MC family too.
Well done Amy Thorn for another smash hit read.
Read more
Report abuse

Maddie
5.0 out of 5 stars Fantastic read
Reviewed in the United Kingdom on October 12, 2021
Verified Purchase
I've very much enjoyed the whole duet what a wild ride its been, the story has been so very traumatic in parts but Isaac and Thanatos got there in the end. We never get to find out Isaacs road name, one can only hope there will be more stories from them in the future.
Read more
Report abuse

Sue T
5.0 out of 5 stars Fantastic read
Reviewed in the United Kingdom on October 13, 2021
Verified Purchase
What a ride of emotions this book is. It continues exactly where Caged in Darkness finished. Traumatic in parts but wow what a love story between 2 powerful men. Amy Thorn what a fantastic sequel, it kept me page turning well into the night.
Read more
Report abuse

Sue
5.0 out of 5 stars Second book in dark mm duet
Reviewed in Canada on October 8, 2021
Verified Purchase
Two warnings
One: This duet is a very dark mm romance
Two: This is the second book in a duet. You have to read book one first
As I said in my review of book one I love reading dark romance stories when I am in the mood and luckily for me I was in the mood to read book one the day before this second book came out. I would hated to have had to wait for this book after reading Caged in Darkness because I became so invested in these delightfully twisted characters I couldn’t wait to read this book. I don’t want to say too much about the plot because I don’t want to give away any of the fun. And yes it is fun if you like this kind of thing. Horrible, delightfully delicious fun. Enjoy.
Read more
Report abuse

Booktravert
5.0 out of 5 stars Excellent read
Reviewed in Canada on October 7, 2021
Verified Purchase
This was a fantastic read with some very dark and tragic subject matter. That being said, I think it is important to address and especially regarding the fact that men can be victims as well. The love between this couple was beautiful and I'd love to read more in this world to see them again.
Read more
Report abuse
See all reviews