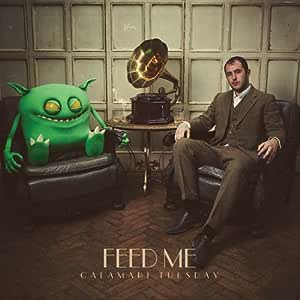 One part English eccentric, one part electronic music whizz, Feed Me aka Jon Gooch aka Spor aka Seventh Stitch (his electronica side project) prefers to do things differently. 'Calamari Tuesday' is Jon's first full-length album. You're just as likely to find Feed Me sharing a bill with the likes of Foals, The Prodigy, 2ManyDJs or Bjork, than with rank and file EDM DJ/producers, and he sells out the kind of live venues most of the latter can only dream of (often playing multiple shows in each city). He doesn't DJ. He collaborates with bands like Crystal Fighters ( Love Is All I Got' is included here). And he'd rather do press interviews through his alter ego, a character named Feed Me from which this project takes its name. On the live front, Feed Me sold out a 20 date US tour earlier this year, and then returned for a sell out 'homecoming' gig at London's Forum (which followed 2012's sell out show at the Electric Ballroom), where he debuted material from the album. London witnessed the kind of immense light and laser show and production that has accompanied his festival shows for Fuji Rocks, Exit festival, Reading, and Leeds - occupying the stages once reserved for the Chemical Brothers, Underworld and other live electronic music acts from the genre's 20th century heyday. When most people envisage a futuristic interface between man and machine, they likely picture 7 foot gleaming cyborgs a la Hollywood's age-old vision. Not Gooch. His perfect symbiosis between man and machine is about 3 foot tall, green, and boasts the kind of teeth that would make Sigourney Weaver think twice. Feed Me was created by Jon and built with the help of animatronic genius, John Nolan, who's worked on projects including Harry Potter, Dr Who, Clash Of The Titans and many more. Musically, 'Calamari Tuesday' shows that peaktime electronic music can be a thrill ride for the mind as well as the feet. It bristles and crackles with energy but shuns the default setting you'll find amongst certain plug-in obsessed peers. This album represents Jon and Feed Me's journey so far, resembling something of an aural biopic of them both to date. He says many of the lead synth lines "were created by the pair in his Hertfordshire garage and fashioned from common household goods". We suspect he might not be telling the truth, but that's Feed Me.

4.9 out of 5 stars
4.9 out of 5
26 customer ratings
How does Amazon calculate star ratings?
Amazon calculates a product’s star ratings based on a machine learned model instead of a raw data average. The model takes into account factors including the age of a rating, whether the ratings are from verified purchasers, and factors that establish reviewer trustworthiness.
Top reviews

yellow4sparks
4.0 out of 5 stars the Feed Me Folks!
Reviewed in the United States on May 12, 2014
Verified Purchase
This cd came out like unexpected. I've been following Feed Me since I heard the dubstep track featured off a dubstep collection, 'BASS CULTURE'. I got to say Feed Me does awesome collaboration with Tasha Baxter. When I found out that there was another dubtep track, I was amazed. I kind of disregarded the album at first but so Amazing was 'Ebb & Flow' that I returned to play through its other songs. Thought it would be more the dub & the step (which I would've liked for) but there is also a plethora of sound here. It's toned down to house, electronic, and to my surprise Reggae. I got to say the trance type are best on it. It has the progressive touch as deadmau5 has on the ones without much vocals. Also I would say the vocal driven track, 'Ophelia' is a real treat.

It's sort of like a pierce to the ears. Seriously 'Ophelia' Shows that Feed Me can maintain slow tempo rhythm and still be Fresh. A huge part it's due to it's melodic center. But it rappidly changes near end oddly enough while the intro to before it changed was where the song should have stayed. That and when it's done again in another song add to my annoyance whuch is why i gave 4 stars. Much songs on it have a specific structure where it has a change of song in between sometimes better than the overall song as in track, 'Short Skirt'. It's like a song within a song. The strong tracks on the album I say are Ebb & Flow, In The Bin, No Grip, and Onstuh. The Dance inclined songs are Orion of course, Death By Robot, Ebb & Flow, No Grip and the perhaps the complicated, Onstuh. Songs for active or passive listen would be Dazed, Ebb & Flow, Orion, Ophelia, Love is all I got and Short Skirt and it does something to the brain like total Soundscape.

I gifted this Cd so don't know about the booklet and it's description since I didn't have honor to unseal it. But soon gonna get my own copy as well, or Later.
Thanks for the AWESUM delivery.

spectrumfox
5.0 out of 5 stars Feed Me Movin' Forward
Reviewed in the United States on December 15, 2013
Verified Purchase
This is not the old Feed Me.

But it's just as good.

Gooch takes his EDM in an exciting new direction as he strives to go against mainstream EDM while still maintaining his own style. The songs sound like Feed Me and the album overall has a similar tone to it. I'd recommend this CD to any fan of Feed Me, as well as anyone liking the Electro House genre. I'm not good at talking about specific mechanics of music so I'll stop here.

The songs are full of energy and flow together well. My personal favorites are Lonely Mountain (which he claims as his current magnum opus), Ophelia, Short Skirt, and No Grip.

Beware, that some of the songs ("In the Bin" and "Fiasco") contain samples as their intro with the F-word in them, but the CD does not come with a warning label.
Read more
Helpful
Comment Report abuse

Andrew
5.0 out of 5 stars Progressiveelectrohousestep&bass
Reviewed in the United States on November 27, 2013
Verified Purchase
A fantastic album.

I found myself thinking, while I was only 5 tracks deep, that I'd already got my money's worth, and there were still 10 tracks left. Definitely a great buy.

What can you expect on this album? Progressiveelectrohousestep&bass. Yup, that's a thing . . . now.
Read more
One person found this helpful
Helpful
Comment Report abuse

Maynard*Is*My*God
5.0 out of 5 stars I LOVE this guy!
Reviewed in the United States on September 4, 2014
Verified Purchase
What an album, I just can't get enough!
Read more
Helpful
Comment Report abuse

Bryan R
5.0 out of 5 stars Feed Me More
Reviewed in the United States on April 4, 2014
Verified Purchase
I only wish there were more songs.... He did some new stuff for Mixmag that needs to be on this album.
Read more
Helpful
Comment Report abuse

Daltron
5.0 out of 5 stars An outstanding album
Reviewed in the United States on November 5, 2013
Verified Purchase
A fun album that can be listened to many times without every getting old. The melodies are complex and he does a great job of blending the classic feed me sound with new genres.
Read more
Helpful
Comment Report abuse

E.J.
5.0 out of 5 stars Worth it
Reviewed in the United States on November 19, 2013
Verified Purchase
Loved this album, definitely worth buying over downloading the songs. Amazon shipping is great as normal so that wasn't a problem.
Read more
One person found this helpful
Helpful
Comment Report abuse
See all reviews from the United States

gar1975
5.0 out of 5 stars opens like T2
Reviewed in the United Kingdom on February 2, 2014
Verified Purchase
the opening track sounds like you've just put the terminator 2 bluray on… a great dance/electronic album. in my top 10 fav albums of 2013
Read more
One person found this helpful
Helpful
Sending feedback...
Thank you for your feedback.
Sorry, we failed to record your vote. Please try again
Report abuse

emma
5.0 out of 5 stars Five Stars
Reviewed in the United Kingdom on November 27, 2013
Verified Purchase
my brother loves this album
Read more
Helpful
Sending feedback...
Thank you for your feedback.
Sorry, we failed to record your vote. Please try again
Report abuse

amiddle
5.0 out of 5 stars Epic tunes
Reviewed in the United Kingdom on July 4, 2014
Verified Purchase
Epic album, Feed Me at his finest! Buy this and you will not regret it!
Read more
Helpful
Sending feedback...
Thank you for your feedback.
Sorry, we failed to record your vote. Please try again
Report abuse

Valter Nogueira
5.0 out of 5 stars perfect
Reviewed in the United Kingdom on December 25, 2013
Verified Purchase
mint condition, met all the expectations, altough i thought there were gonna be some stickers from feed me on it, but i understand if there arent any.
Read more
One person found this helpful
Helpful
Sending feedback...
Thank you for your feedback.
Sorry, we failed to record your vote. Please try again
Report abuse