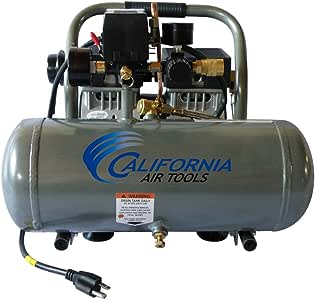 Brand: California Air Tools
3.9 out of 5 stars 218 ratings
Currently unavailable.
We don't know when or if this item will be back in stock.

The CALIFORNIA AIR TOOLS 1610A Ultra Quiet air compressor is designed to be one of the quietest air compressors in the industry having only 60 decibels of sound. This air compressor makes less sound than a normal conversation (65 decibels). The powerful 1.0 HP motor operates at only 1680 RPM creating less noise and less wear. The Oil-Free Dual Piston Pump System is engineered for high performance and durability .The 1.6 gallon aluminum air tank is lightweight (35lbs) and rust resistant making it very easy to transport and store. This air compressor is ideal for anyone working where noise is a major issue

The California Air Tools 1610A Ultra Quiet air compressor is designed to be one of the quietest air compressors in the industry having only 60 decibels of sound. This air compressor makes less sound than a normal conversation (65 decibels). The powerful 1.0 HP motor operates at only 1680 RPM creating less noise and less wear. The Oil-Free Dual Piston Pump System is engineered for high performance and durability. The 1.6-Gallon aluminum air tank is lightweight (35lbs) and rust resistant making it very easy to transport and store. This air compressor is ideal for anyone working where noise is a major issue

3.9 out of 5 stars
3.9 out of 5
218 global ratings
How are ratings calculated?
To calculate the overall star rating and percentage breakdown by star, we don’t use a simple average. Instead, our system considers things like how recent a review is and if the reviewer bought the item on Amazon. It also analyzes reviews to verify trustworthiness.
Top reviews

Cons:
- Lower air flow than a noisy compressor, but this isn't really a con. The specs are what they are, and they either meet your needs or they don't.

I wanted an air compressor for general use in my garage. I blow dust off my table saw and work bench, inflate car and bike tires, and use an occasional brad nailer. This compressor keeps up, and while the smaller tank volume means it runs more often, it's not really an issue due to the sound level.

If I need a higher volume compressor at a later date, I'll still probably use this one for most of my needs.

Vernon A. Miller
4.0 out of 5 stars Great little compressor for small applications
Reviewed in the United States on March 22, 2015
Verified Purchase
[NOTE: I bought this through Amazon Warehouse Deals, which is Amazon's "scratch and dent" shop. Items seem to be returns, or have damaged packaging, or sometimes cosmetic defects - the nature of the problem is described accurately. I have been quite satisfied with everything I've bought that way. This compressor was advertised as having damaged original packaging and having a small (less than 1"x1") cosmetic defect. The box was a little rough but not that bad, and I looked for the defect but didn't find anything obvious. So I'm satisfied!]

I bought this compressor to replace a very old and noisy Campbell-Hausfeld wheel-around horizontal tank compressor that I've had forever (I bought the old C-H at Montgomery Ward, so that gives you some idea of how old it is. BTW, it is still working!) I wanted something quieter that I could co-exist with in my basement workshop, and more portable that I could easily tote when needed. The CAT-1610A fits both needs nicely.

It's cute (not an attribute that one normally associates with air compressors). It's light enough that my wife or daughter can carry it if they ever need to. It is a lot quieter than the old C-H - as others have mentioned, it's not whisper-quiet but you can carry on a conversation at a normal talking level while it's running.

Others have mentioned the fit and finish of their compressors as a bit sloppy - connectors that look like they were attacked with pliers, leaky joints, and so on. Mine seems to be OK and has no leaks. It's obviously built with low cost in mind (or, as we say in my trade, "value engineered") but it's fine so far.

I agree with other reviewers about the on/off lever, which is part of the pressure switch assembly. It's wedged in back of the tank pressure gauge in such a way that you have to jam your finger in an awkward place to turn the unit on and off. That's kind of stupid. They could have either extended the tank pressure gauge out a little more to give more clearance, or used a bottom-fed gauge and mounted it face up (which would also keep you from having to bend way over or crouch to read it). Since my eyesight ain't what it used to be, I might replace both gauges with larger ones that are easier to read anyway.

I like the design and placement of the drain valve. It is a quarter-turn ball valve rather than the "petcock-style" (threaded valve controlled with a butterfly handle) that is used on a lot of other compressors. It is plainly visible and easily reached and operated from the front of the compressor. However, since it's a small valve and has a small opening, it makes a really piercing high-pitched whistle when you open it. So, even though the compressor is quiet in operation, you should probably wear ear protection when you drain the tank :-)
Read more
One person found this helpful
Helpful
Comment Report abuse

Tool Ogre
5.0 out of 5 stars Excellent compressor, lack of noise is a great thing!!!
Reviewed in the United States on May 11, 2016
Verified Purchase
Wow, is this ever quiet. I can't believe it is oil less as it is quieter than some oil units I have been around.

First off, package arrived in two days and was in great shape, no problems there I used this last weekend to install about 110 sq ft of hardwood in my home office. I had a Porter Cable pancake compressor that developed more leaks than Hillary's server over the last year or so, and decided that replacing it was better then repairing it. It was loud and leaky, not a good combination for an air compressor. Duct tape works great, but it was well beyond the powers of the duct tape.

This unit is very quiet. As a one man flooring crew last weekend, I was able to use a flooring nailer/stapler and the compressor would run once every 8-10 staples. I never got out in front of it where it wouldn't sink a staple, but I'm not a crew looking to crank out volume. Again, cannot stress enough how quiet it was compared to the PC pancake it replaced. Had this in the house and could not hear it running upstairs from downstairs unless you really really really tried. And I have been around some oiled units and this is quieter than them tool.

Will this let you run a roofing or framing crew off of? No. Is this a great option for a sole proprietor or home DIY guy that has occasional air gun needs? Absolutely.

I knew what I was buying when I bought this and am extremely impressed with the compressor so far.
Read more
2 people found this helpful
Helpful
Comment Report abuse

RO Expert
5.0 out of 5 stars Quiet little compressor with STELLAR customer service at no extra charge
Reviewed in the United States on August 14, 2014
Verified Purchase
I bought this compressor to run a high speed (420,000 rpm) air turbine power carver. I did not know at the time, but this is actually the compressor recommended by the manufacturer of the power carver for the device.
I bought it via the amazon warehouse. The shipping was lightning quick as usual. There was some minor shipping damage - air filter housing was bent out of shape, one of the plastic fan housings was stove in a little, and there was a crack in one of the plastic cylinder head covers. Nothing that materially affected the operation of the compressor. I went on the California Air Tools website and left a message there detailing the issues and asking for replacement parts. I had a response inside two hours, informing me they were shipping the replacement parts out that day at no cost. I had read in other Amazon reviews that the customer service was good (one of the reasons I bought this device) - but this was exceptional. Thank you George Lopez for the super service! I had the parts the next day!

The compressor works very well and is certainly quiet enough to run in the house without issue (which my old PC pancake compressor definitely is NOT). It cuts out at 120 psi as advertised. So far I am very pleased with the purchase and would recommend California Air Tools to anyone.
Read more
3 people found this helpful
Helpful
Comment Report abuse
See all reviews

Robert Savard
1.0 out of 5 stars Used California Air Tools
Reviewed in Canada on July 2, 2015
Verified Purchase
Good product but it was supposedly to be factory recertified:
- 2 of the 4 bold holding the tank where missing et the thirt one was not screw correctly
- the relay that restart de compressor has the pressur is going down was not working i had to repair it myself

so watch when the say used with only small scratchs !!!!
Read more
Report abuse

Plume
5.0 out of 5 stars Quiet, fills quickly.
Reviewed in Canada on May 5, 2015
Verified Purchase
Very quiet, like everyone said it would be. It fills in less than a minute, which is perfect for what i do, airbrushing.
Read more
Report abuse