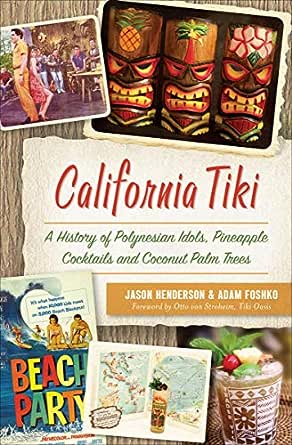 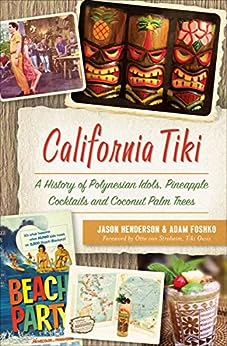 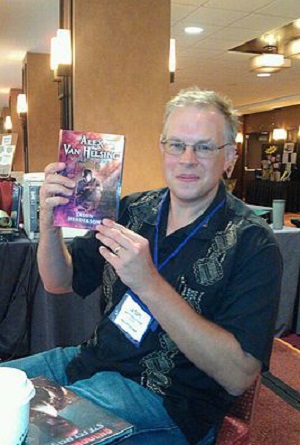 "Broader conceptually than you might expect. ....
Yes, it covers the historical significance: the reaction of post-WWII and Korean war veterans rewriting their experiences to deal with both PTSD and reintegration into society by sublimation and subversion. It addresses music (Exotica and Surf), bars and Tiki lounges, movies, television programming, demise with the rise of Vietnam War due to the discomforting similarities, and the resurgence again in the 90s. ... also presents the sides and interpretation of fantasy versus appropriation inherent in Tiki. ...
Overall, a solid overview of California Tiki to give readers a basis for understanding, a deeper read will require use of the extensive footnotes."
-- NoGlitterBlown
"The key word is "escape." Chapters guide the reader through Tiki-land--from music and books, films and TV shows, to the new world of Tiki. Along the journey, you'll learn about the Tiki cultural influences of Dick Dale, "King of the Surf Guitar" and his classic song "Misirlou;" the soundtrack from "The Endless Summer" iconic Surf Documentary; Elvis' "Blue Hawaii," Hawaiian Eye, Gilligan's Island and even The Brady Bunch TV shows; Thor Heyerdahl's thrilling, gripping real-life book (and documentary) Kon-Tiki, about his amazing 5,000 mile sea voyage; famous drinks (and recipes) like Mai Tai, Zombie, Planter's Punch and Singapore Sling and Tiki events.
There are dozens of black & white as well as color photos documenting Tiki Culture, which make this an educational and enjoyable book to consume."
-- Craig MacDonald, SeeCalifornia.com
"I picked up this slim history of California Tiki because of what it advertised: a rollicking jaunt through the culture, drinks, music, and aesthetic of the whole Tiki thing. And I got that. And then it got way deeper than I expected.... The book takes a bit of a deeper look into the world the returning G.I. was thrust into following the Second World War. ...They invented escape in the concepts of half-remembered "exotic" refuges they found in the Pacific theater.

This is tiki culture, along with tropical drinks and rattan, and it's part of why I want to read more deeply on the subject. The authors bring up the specter of cultural appropriation - of the fact that tiki in America is mainly the invention of cis-straight white guys, and the fact that by utilizing the "exotic," they [appropriated] other cultures that weren't their own. But they also, rightly I believe, point out that tiki isn't taking from a monoculture. It has some resemblance to actual Polynesia and Hawaii, but it really is a place made of imagination, as fantastical as Disneyneyland. "Tiki," they argue, "is for everyone."

If I've made this book seem sloggy, it's not. I learned a lot about exotica and surf music, about beach party movies and how to make the perfect Blue Hawaiian. There's a lot of history packed into this small book, most of it oriented to pop culture, and most of it breezy. But an understanding of tiki isn't complete without understanding its roots, and why it was so important to a generation who was still struggling to find its own identity, and so made one up."
-- Kevin Quigley, kevinquigleydesign.com/

Jason Henderson has written games for EA, Microsoft and Activision. He is the author of the popular Alex Van Helsing series from HarperCollins and the 2019 series Young Captain Nemo from Macmillan. He wrote the magical romantic comedy Sylvia Faust for Image Comics and the assassin thriller Daughters of the Shadow for Marvel; co-wrote Clockwerx, a steampunk adventure about a Victorian mech team, for Humanoids; and co-wrote the teen adventure Psy-Comm for Tokyopop. This is his first nonfiction book.

Adam Foshko has worked on some of the most successful media franchises in history. His experience as a writer and world builder has cultivated a deep understanding of why stories are important and their place in reinforcing culture, socialization, history and identity. He believes that Tiki has a similar power--one that calls to us from a much older world of mystery, binding us together in its rediscovery, playfully tempting us with the opportunity of escape and promising a tale of great adventure. --This text refers to the paperback edition.

4.3 out of 5 stars
4.3 out of 5
15 customer ratings
How does Amazon calculate star ratings?
Amazon calculates a product’s star ratings based on a machine learned model instead of a raw data average. The model takes into account factors including the age of a rating, whether the ratings are from verified purchasers, and factors that establish reviewer trustworthiness.
Top Reviews

Amazon Customer
5.0 out of 5 stars tiki lifestyle rules!!!!!
Reviewed in the United States on August 5, 2019
Verified Purchase
interesting take on the tiki phenom. read many books about tiki culture. this is a good addition to my library.
Read more
3 people found this helpful
Helpful
Comment Report abuse

Kevin Crossman
3.0 out of 5 stars A lot of focus on related cultures, but less on tiki culture itself
Reviewed in the United States on February 16, 2020
Verified Purchase
Some great info about the pop culture of the time, but less about tiki culture itself. A lot of stuff about movies.
Read more
Helpful
Comment Report abuse

father dick
1.0 out of 5 stars VERY LAME INTRODUCTION TO TIKI POP
Reviewed in Spain on July 23, 2019
Verified Purchase
As a California pop culture aficionado, I expected a decent view of tiki culture. The book is poor in information, dealing with lots of clichés and stereotypes of actual tiki culture, with no deep insight. The surf music test is infallible: to link the 60s surf music genre with 60s tiki pop culture shows there's no much interest in the real thing. And the direct link between the Beach party film genre as a part of Tiki culture... Well... it shows there's no much effort in giving a good job. Seems the authors like to mix Tiki culture with California nautical pop culture with no criteria.

Anyway, it could be a reasonable instroduction to tiki pop to non familiar readers of the subject. But if you have to invest your money in a good book about Tiki pop, it's a must to get the Sven A. Kirsten or Domenic Priore books. They are pure gold.