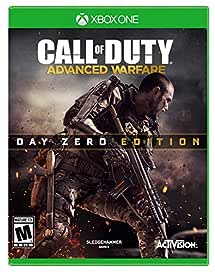 Brand: ACTIVISION
Platform : Xbox One |
Rated: Rating Pending
4.4 out of 5 stars 560 ratings
Available at a lower price from other sellers that may not offer free Prime shipping.
In Stock.
Arrives: Friday, Dec 11 Details
Sold by Simon's Macho Media Store LLC and Fulfilled by Amazon.
New & Used (29) from $8.50 + $3.99 Shipping

4.4 out of 5 stars
4.4 out of 5
560 global ratings
How are ratings calculated?
To calculate the overall star rating and percentage breakdown by star, we don’t use a simple average. Instead, our system considers things like how recent a review is and if the reviewer bought the item on Amazon. It also analyzes reviews to verify trustworthiness.
Top reviews

indub
3.0 out of 5 stars the duty
Reviewed in the United States on November 4, 2014
Verified Purchase
Xbox One version.

Last time I played CoD was MW3. My favorites up until then were CoD 4:MW and MW2. Advanced Warfare doesn't quite match up to those two in my mind, in part because of the introduction of the exo suits but also because of originality. Decide for yourself though, this is only my opinion.

Graphics aren't a priority to me but I think the game looks great.

Pros:
- The game mechanics are smooth, as always with CoD.
- The new features with the exo suits are a welcome addition to the series but still take away on some realness the game used to bring.
- The weapons work well, some cool new additions. No spoilers.
- The campaign is entertaining, better than some of the previous games but not the best. It does however have the best single player ability set. I only played it on Hardened difficulty.
- The Multiplayer UI still has the same basic look and approach which is well done.
- Survival mode is pretty fun.
- Will be a new exo-Zombie mode! New weapons, items and maps in DLC! Finally more than maps!
- Classic multiplayer for play without exo suits if you prefer

Cons:
- The operator appearance customization would be better included with each custom weapon class and used in the matches. Instead, its pretty pointless because its not used for anything really.
- P2P lag, sometimes makes it pointless to play. Why not use dedicated servers?
- Survival Mode instead of Covert Ops, that's a con to me.
- I was hoping Advanced Warfare would add a bit more depth into the multiplayer part of the game as well as more height and distance in levels for more spread.

Overall:
I say just wait to buy until the price drops. If you compare this to the previous titles or other games like Titanfall then yeah, this game doesn't really bring anything new to the table. However, it is well put together and entertaining. I've always liked the grittiness of CoD over other games, so regardless of what this game lacks I'll still choose it over others like Halo or Titanfall. If this had released in place of MW3 it would've been the right time, IMO. Now it feels like CoD is playing catch up instead of leading the pack.

We'll see what the future holds for this game via patches and DLC but with Evolve releasing soon I see CoD taking the backseat in my gaming world.

sure, call of duty might use the same recycled player movement, running, and gun handling, but i feel like thats what keeps the players coming back, because its familiar to us. one major thing activision and sledgehammer games brought in was the use of exo suits. exo suits were made for one thing and one thing only: to give the wearer a BIG and DISTINCT leg up(pun intended ) on the battlefield. exo suits allow you to dash dodge by use of clicking the left stick and moving you left or right, which i never really used cause i forgot it was there most times, but it was nice to know it was. another thing we can use to our advantage with the exo suits are the abilities. abilities come in a variety of mods, such as cloaking yourself, spawning a big ol' riot shield for a few seconds, or giving yourself a much needed double speed sprint. the suits also are the new means of throwing, or "launching" your grenades, which also have a few new gimmicks as well. you are also able to customize and receive new appearances to your exo suits, through "care drops' which give you different attire to wear, as well as different variations of weapons, suits, and clothes.

the weapons in CODAW are pretty well balanced, they did a decent job at keeping older weapons in the game, like my favorite the M16, and ushering in new futuristic weapons, like the BAL, or the new crossbow,, which was a pre order bonus.

All in all, i think activision and sledgehammer games made something great here, and im excited to see where the warfare series is able to go from here.

Ned Kelley
4.0 out of 5 stars Not the Best, but Decent
Reviewed in the United States on December 8, 2017
Verified Purchase
I just barely opened this...It sat on my shelf unopened for several months. I'm going to be honest...we went out and bought COD Black Ops 1-3 after playing Advanced Warfare because we wanted the 4 player option. I need to take this through campaign mode, but I like the slide and exo-boost features. Makes for some interesting scenarios. Not a MUST HAVE, but not a bad addition to my gaming cabinet.
Read more
Helpful
Comment Report abuse

Aaron Edwards
3.0 out of 5 stars ... above noted 3-star score is misleading- this is a good game. However
Reviewed in the United States on November 14, 2015
Verified Purchase
Perhaps the above noted 3-star score is misleading- this is a good game. However, it didn't live it to the hype. Kevin Spacey gives a great performance, but the plot was over-the-top and too implausible to be believable- even by the action-movie standards that Call of Duty has followed. The multiplayer, while introduces interesting new elements, still does not feel revolutionary. It feels like previous Call of Duty games with some additional mobility options. The rest is the same- same or similar loadout options, same feel of the action and levels- and if you are a mediocre player like me, the same/similar bunch of kill streaks that you will probably won't ever get to use because you are constantly outgunned by other players who have more time to play games in general. It's still fun- but compared to other recent shooters like Titanfall or Halo 5, it isn't the most original multiplayer experience.
Read more
Helpful
Comment Report abuse

D-Rock
3.0 out of 5 stars Multiplayer is fun, campaign is a drag.
Reviewed in the United States on November 12, 2015
Verified Purchase
The multiplayer community for call of duty is one of the largest around. And its well earned. Multiplayer is very fun as always. There do seem to be some issues with lag sometimes but never too intrusive or awful. If you enjoy call of duty multiplayer get this game. If you are looking for a fun or immersive story/campaign mode then stay away. The campaign is sloppy and frankly kind of boring and short. I didn't really find it worth the play through as i always play the story mode in call of duty before i begin multiplayer. Just not worth your time or money.
Read more
One person found this helpful
Helpful
Comment Report abuse
See all reviews

S. K. L. Ip
5.0 out of 5 stars COD AW has excellent campaign, co-op and multiplay
Reviewed in Canada on November 14, 2014
Verified Purchase
COD AW has excellent campaign, co-op and multiplay. I would say this is a great COD game after BOII (sorry, I hate COD Ghosts). However COD's jetpack mechanics are very limited; the movement is basically vertical. I CANNOT perform jump and parkour actions like what we do in Titanfall that I can run onto wall, hang, jump and shoot. This is one of the cons that I can find with this game. Another issue is lagging at multiplay mode. I'm not sure if those are hacked laggings or server connection problems.

I give another 5 stars to Kevin Spacy's performance; it's like as if the story is a sequel to House of Cards. In fact he did play COD in basement in Season 1 when he was a congressman. It's not hard to imagine President Frank Underwood would soon declare war on every hostile country in the world.

Colton Myers
5.0 out of 5 stars No zombies but good buy
Reviewed in Canada on March 13, 2020
Verified Purchase
Great addition to any COD collection! Doesn't come with zombies, as zombies is a DLC, but the game has been out long enough to research that. Good buy!
Read more
Report abuse

Garrett Potter
2.0 out of 5 stars The usual COD nonsense where every add on costs extra
Reviewed in Canada on April 22, 2016
Verified Purchase
Single Player - Half decent story mode with mostly forgettable futuristic elements. Kevin Spacey's likeness is the only real draw.

Multiplayer - The fact that Activision makes you buy numerous map packs, at about 20 bucks a pop, to play with other players online is a terribly exclusionary tactic that means if you don't buy the map packs, you won't ever play a decent online game since there are no players.

Zombies - Again, an extra that you must pay for on top of the game to unlock! what an outrage, if you bought the game on day one, and the map packs, you are looking at easily 100-150 dollars. This is like 1/3 the price of a new console! Glad i got it for 20 used, won't be buying map packs as i don't believe in it. Last COD i bought was Black Ops, got away from the franchise, now I remember why.
Read more
Report abuse

J. Elrick
4.0 out of 5 stars My husband really enjoyed playing it
Reviewed in Canada on January 22, 2015
Verified Purchase
My husband really enjoyed playing it. Said it was just as good as all the others. He found a glitch at one point which prevented him from making it past a certain point, but it cleared up after he restarted the game. Lost a bit of progress, but at least he wasn't stuck. Took him about a month to finish the offline part, playing a few hours a week.
Read more
Report abuse

Page 1 of 1 Start overPage 1 of 1
This shopping feature will continue to load items when the Enter key is pressed. In order to navigate out of this carousel please use your heading shortcut key to navigate to the next or previous heading.
Back
Next
Pages with related products. See and discover other items: adventure island, xbox one games, xbox one s fan, xbox one stuff