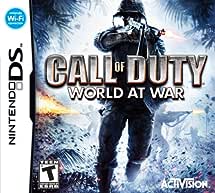 Call of Duty World at War completely changes the rules of engagement by redefining WWII gaming and thrusting players into the final tension-filled, unforgiving battles against a new ferocious enemy in the most dangerous and suspenseful action ever seen in WWII. Powered by Call of Duty 4: Modern Warfare technology, Call of Duty: World at War brings an uncensored edge to combat, as soldiers face the most harrowing and climatic European and Pacific battles in which an enemy, who knows no surrender and no retreat, will fight to the last breath, unleashing an arsenal of lethal surprising tactics. Peril and danger lurk throughout the battlefield as players combat the unknown risk of the new chaos of battle. From the remains of Russia and the ruins of Berlin, to the beach and jungles of the deadly Pacific Theater, the volatile action takes on added depth as players employ new features that previously were only-available in multiplayer, including perks, rankings and online stats in up-to full four-player cooperative gameplay. New infantry and vehicle-based weapons, like the potent flamethrower, bring the battlefield ablaze. Final Battles: Call of Duty: World at War forces players to survive the final climactic days of a world at war to thwart the advance of Axis powers on multiple fronts from Europe to the Pacific o delivering the hallmark Call of Duty cinematic intensity on a worldwide scale. Play as a U.S. Marine or Russian conscript across a variety of European and Pacific infantry, vehicle and airborne missions. An all new depth of WWII-era combat variety, from the tactics and weapons to the unique and varying locations that traverse the ruins of Western Europe all the way to the harsh, wetlands of Imperial Japan, immerses gamers into an adrenaline-filled, epic struggle. Co-Op Campaign Mode: "No One Fights Alone" takes on new meaning as players can complete the entire single player campaign with up to four players online or two players via split-screen (both online and offline). Strategizing with others provides gameplay diversity, replayability and engagement. Complete unique co-op challenges to earn rewards and bragging rights. The title takes the perks, rankings and online stats that players love in multiplayer and builds them into the cooperative campaign as well, adding even more variety, replayability and continuous fun. Addictive Multiplayer: Call of Duty: World at War continues the addictive and leading class-based multiplayer action. The addition of vehicles to the highly-successful Call of Duty 4: Modern Warfare multiplayer that already includes persistent experience, player rankings, upgradeable weapons, squad-based gameplay, map scripting, customizable classes and perks, brings a new dimension to Call of Duty online warfare. Unprecedented WWII Cinematic Quality: Utilizing the jaw-dropping and revolutionary Call of Duty 4: Modern Warfare engine, Call of Duty: World at War delivers an unprecedented level of visual and cinematic effects to WWII. Highly-detailed character models, self-shadowing, environmental lighting and amazing special effects up the WWII authenticity to new heights. Depth of field, rim-lighting and texture-streaming technology bring the adrenaline-pumping combat to life. Physics-enabled battlefields and destructible cover immerse players into the harrowing and dynamic combat.

Call of Duty: World at War from Activision for the Nintendo DS completely changes the rules of engagement by redefining World War II gameplay. In this edition, players are thrust into the final, tension-filled battles against a new, ferocious enemy in the most dangerous and suspenseful action ever seen in a WWII title. Building on Call of Duty 4: Modern Warfare, this next installment promises to immerse players in gritty, chaotic gameplay.

The Nintendo DS version of Call of Duty: World at War brings American, British, and Russian campaigns into your hands as you confront new and relentless enemies across European and Pacific battlefields. This title provides the opportunity to achieve victory in seven unique mini-games and battle your friends in Deathmatch, Team Deathmatch, Capture the Flag, and Hunter/Prey across 11 different combat zones.

Seven Mini-Games Provide Big Fun
Call of Duty: World at War employs the Nintendo DS's stylus and dual-screen interface for a unique gaming experience. You'll be able to transmit secret messages with Morse Code, disarm mines, parachute to safety, heal fellow soldiers, provide artillery support, and more. If you work hard and take advantage of the tools at your disposal, you're sure to achieve victory on some of the most chaotic battlefields in history.

Wireless Multiplayer Action
Connect online in four-player multiplayer Wireless and Wi-Fi action. With more than 10 maps available for Deathmatch, Team Deathmatch, Capture the Flag, and Hunter/Prey, you can challenge your buddies to multiplayer matches at any time. Up to four people can fight with or against one another. And with a wide array of weapons at your disposal, including the fan favorite MP44 machine gun, you can cut down your friends with a whole host of exciting firearms.


Achieve victory in seven mini-games or battle your friends across 11 different combat zones.

4.1 out of 5 stars
4.1 out of 5
93 global ratings
How are ratings calculated?
To calculate the overall star rating and percentage breakdown by star, we don’t use a simple average. Instead, our system considers things like how recent a review is and if the reviewer bought the item on Amazon. It also analyzes reviews to verify trustworthiness.

T. Patocka
5.0 out of 5 stars Not too bad for $20
Reviewed in the United States on July 6, 2010
Platform: Nintendo DSEdition: StandardVerified Purchase
I'm not going to get into all of the details of this game as there are a ton of resources out there outlining the campaign and online modes but if you want a cheap first-person shooter for the DS, this is a good choice. Overall the graphics look pretty good on the DSi XL that I play this game on and there are times where it is kinda hard to see your enemies but if you shoot enough rounds in that general direction, you eventually drop them. I think the campaign mode took me around 20 hours or so to beat and I had the difficulty turned way down so it would be easier. This game has some fun vs. modes and online play that you can use and I was very impressed with the sound of the weapons and the detailing of the backgrounds to all of the game play. There will always be games out there with better graphics than what you have but you don't have a lot of options when it comes to FPS on the DSi so I figured I would give this game a chance and I did not walk away disappointed. The only thing that I have noticed is that sometimes it seems like I have to empty and entire magazine of rounds in an enemy to drop him and at certain points of the game it feels like a mindless carnival shoot-em-up but it is still fun. Also, the controls can be a bit tricky. You use the L/R buttons to fire and your D-pad to walk forward, backward, left and right. To look around, you use the cursor on the touch screen which can leave the DSi a bit lop-sided in your hands, depending how you sit when you play. I usually prop my XL on a couch pillow to keep it up and balance the XL in my left hand to keep it steady. I know it sounds unusual to get instructions like this but when you are talking about a game that you will play for hours at a time, you need to be comfortable. The reason why I traded in my DS Lite for the XL was because the Lite didn't fit my hands and would leave my thumbs aching about 30 minutes of play time, regardless how I held the lite, the DS XL fits me much better (but the XL is a different review altogether that I have posted). Anyway, if you buy this game expecting nothing more than a fun shoot-em-up with average graphics, you will be satisfied.
Read more
6 people found this helpful
Helpful
Comment Report abuse

B. Smotherman
5.0 out of 5 stars another great Call of Duty
Reviewed in the United States on May 4, 2016
Platform: Nintendo DSEdition: StandardVerified Purchase
another of the three call of duty games my son got for his birthday and he can't pick which one he likes the best as he can't stop playing any of them
Read more
3 people found this helpful
Helpful
Comment Report abuse

HF
1.0 out of 5 stars Used
Reviewed in the United States on October 18, 2020
Platform: Nintendo DSEdition: StandardVerified Purchase
The game is great but I just realized that there are saved stats for multi player and awards for things I never did which means the disk is used. I thought I was getting a new one. Would the seller please clarify?
Read more
Helpful
Comment Report abuse

L. Frutiger
5.0 out of 5 stars Everything a beginner-expert gamer wants to have!
Reviewed in the United States on December 12, 2013
Platform: Nintendo DSEdition: StandardVerified Purchase
Another good gift for our grandsons. The Nintendo company know how to capture the attention of their fans. This game gets a load of play almost every day. Both on TV and on hand-held devices.
Read more
One person found this helpful
Helpful
Comment Report abuse

KBednarsky
4.0 out of 5 stars Complicated
Reviewed in the United States on March 31, 2013
Platform: Nintendo DSEdition: StandardVerified Purchase
Game's great, I'm not so sure the DS is the right platform for it though. Hard to work the controls on a hand held system. PC or full size gaming console would probably be better.
Read more
Helpful
Comment Report abuse

Kakr
5.0 out of 5 stars CALL OF DUTY: WORLD AT WAR - NINTENDO DS
Reviewed in the United States on April 8, 2014
Platform: Nintendo DSEdition: StandardVerified Purchase
The product was delivered as promised. I purchased this game for my GrandSon and He has not put down his DS game player since - He loves it.
Read more
Helpful
Comment Report abuse

L. A. Maxwell
5.0 out of 5 stars Great game!
Reviewed in the United States on January 4, 2013
Platform: Nintendo DSEdition: StandardVerified Purchase
We love all the Call of Duty games, and this one is of course awesome like the others. There is not too much gore, game play is easy for young hands.
Read more
One person found this helpful
Helpful
Comment Report abuse
See all reviews

Page 1 of 1 Start overPage 1 of 1
This shopping feature will continue to load items when the Enter key is pressed. In order to navigate out of this carousel please use your heading shortcut key to navigate to the next or previous heading.
Back
Next
Pages with related products. See and discover other items: ds all games, european map, retro game