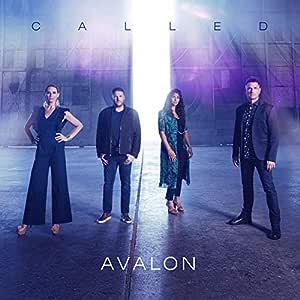 AVALON (Artist) Format: Audio CD
4.8 out of 5 stars 31 ratings
Amazon's Choice recommends highly rated and well-priced products.
Amazon's Choice for "avalon cd music"
See all 2 formats and editions Hide other formats and editions
Includes FREE MP3 version of this album.&nbspProvided by Amazon Digital Services LLC. Terms and Conditions. Does not apply to gift orders.&nbspComplete your purchase to save the MP3 version to your music library.
Available at a lower price from other sellers that may not offer free Prime shipping.

Red Street Records artist, Avalon, has been inspiring lives with their music around the globe for over 20 years. Recognized by the industry for their powerhouse vocals, the group has achieved significant radio success including hits like Adonai, Can't Live a Day and Testify to Love - just to name a few. This three time Grammy Nominated, American Music Award and Dove Award winning Christian artist is composed of Greg and Janna Long, Jody McBrayer, and Dani Rocca. Over their 20 plus year career, Avalon has made 13 albums, sold over 3 million units, has had 22 #1 Christian radio singles, and has won multiple awards. Now for the first time in over a decade, Avalon will release their 14th full-length album, Avalon: CALLED, on October 18, 2019. Avalon is a flagship artist with Red Street Records, a new label launched by Jay DeMarcus, a highly lauded member of the music and entertainment communities, and member of Rascal Flatts.

4.8 out of 5 stars
4.8 out of 5
31 global ratings
How are ratings calculated?
To calculate the overall star rating and percentage breakdown by star, we don’t use a simple average. Instead, our system considers things like how recent a review is and if the reviewer bought the item on Amazon. It also analyzes reviews to verify trustworthiness.
Top reviews

Paul J. Mancil
5.0 out of 5 stars Avalon's Best Album Since 1997's A Maze Of Grace
Reviewed in the United States on March 23, 2020
Verified Purchase
Although more than a decade spans this album from the excellent 2009 Reborn release, they continued to tour when they could in between that time. The new deal they struck as a flagship artist on Red Street Records allows them to be back in the limelight again. And judging from this album, they deserve it. New member Dani Rocca is their best soprano since the departure of Cherie Adams. Her voice is rich in soul and she hits some of the highest notes of any past singer. Two songs on Called, "Only One" and "If Not For Jesus," are easily two of Avalon's greatest songs of all time. And other fantastic songs like "Closer," "Keeper Of My Heart," and "Sacred Ground" show why Avalon are the premier veterans in ensemble singing. Worshipful in nature, and full of lyrics to challenge, inspire and encourage, Called contains many worshipful anthems that could be part of any evangelical church service in America. Yet the album as a whole maintains a strong contemporary and relevant vibe.
Read more
One person found this helpful
Helpful
Comment Report abuse

S. Wilson
5.0 out of 5 stars Glad to have them back!
Reviewed in the United States on February 20, 2020
Verified Purchase
Avalon has been gone too long. My ONLY complaint about this album has nothing to do with the talent. This CD comes in the cardboard wrapping. I didn't see anywhere in the CD info where this was noted. At least it included liner notes. Just be aware of what to expect.
Read more
One person found this helpful
Helpful
Comment Report abuse

SMarshall
5.0 out of 5 stars Been Waiting a LONG Time for this Album!
Reviewed in the United States on February 21, 2020
Verified Purchase
Every song is amazing and cant stop listening!
Read more
Helpful
Comment Report abuse

SF
5.0 out of 5 stars So good!
Reviewed in the United States on October 23, 2020
Verified Purchase
I love every cd that Avalon has ever put out and I was so glad to see a new one and to have Jody back!
Read more
Helpful
Comment Report abuse

Sir Articulate
5.0 out of 5 stars They started by Testifying to Love...
Reviewed in the United States on June 14, 2020
I picked up this album as soon as it came out, and I've been listening for a while, trying to decide how I felt about it. As a fan from the beginning, of course I was THRILLED to have a new Avalon album in the rotation--even more special because Jodi McBrayer has rejoined the roster (after heart surgery & a 13-year hiatus from the group). But this is what we ALL think; howabout the music?

Well, they learned something after a bit of a misstep on 2009's REBORN. Avalon MUST have standout solos from Janna & Jody. Avalon may be known for its harmonies, sure, but any one of the members could be the lead singer, so we want to hear them lead. For my money, the 3 best tracks on this album are:
#5 "If Not For Jesus" -- THIS is the Janna ballad we expect.
#9 "Glitter & Glory" -- Recaptures the groove of the "Testify to Love" era, thanks to a powerhouse collaboration of writers: the inimitable Tony Wood, Ian Eskelin (producer of 2009's REBORN), and today's CCM darling Francesca Battistelli.
#7 "Sacred Ground" -- A classic trade-off between the 2 original members. Carries the same anthemic torch as THE CREED's "You Were There" or OXYGEN's "The Glory", and it's just perfect writing!

I'll agree with another reviewer I read that the opener "Called" isn't a song I can listen to repeatedly. I'll grant that it's a great intro song for the album: with Avalon's updated sound & time for each of the singers to shine. But the refrain, "CAAAAAAAAAALLED" is a bit much for me, even if I do like the message.
Nevertheless, for me, the stinker on the album is #8 "Lanterns". Maybe it channel's "Unbelievable" a bit in its nonconformity to the rest of the album, but the marching beat, historical gospel intro, and a breakout solo by the producer (no less), makes it (at best) just a bad Greg Long song. Hard pass.

Jody's solo "I Just Can't Stop My Hallelujahs" was co-written by Krissy Nordhoff (of ZOEgirl fame). It proves again that he's just the best at what he does. When Jody sings, we can't stop our hallelujahs either.

The last few songs took a while to grow on me, but I can strongly recommend them after many listens. I really like "Keeper of My Heart", because it channels the best of Greg's work with Avalon which was (in my opinion) found on REBORN. That's where they finally integrated his voice into the mix--rather than putting him out in front (which just makes a Greg Long song) or somewhere hidden in the back. Dani & Jody's harmony vocals are especially on-point here, and the Chipmunks are a great addition too. [wink]

#3 "Closer" is our introduction to new member Dani Rocca. I think her tone shows a notable similarity to Francesca Battistelli, and she is nothing like former sopranos Amy Richardson or Melissa Greene. Her style is what makes this project sound like a throwback to the days of Avalon with Nikki or Cherie, but this lady has more force & more chops than either of them! Another of the 4 songs here co-written by Tony Wood, “Closer” sounds like an empowerment song at first. Give it a closer listen though, and you'll be struck (as I was) with the unusual subject matter: the growth of a Christian. Strange, that this is a novel concept for a Christian song, right? But this points to the big shift for the Avalon of 2020: they've gone from "testifying to love" to testifying for the Lord. Track #4 "Only One" is more of a creed than THE CREED! It's an uncompromising statement of faith, with super-tight harmonies that could only be found on an Avalon album. While Janna holds down the chorus, both Dani & Jody put in vocal turns reminiscent of the group's collaborations with producer Charlie Peacock. However, the lyrical content you find here is more open-faced & on-the-nose. If this is the last album they put out (and I'm PRAYING it isn't) I know this quartet will be found faithful. Now I just hope listeners will be faithful to find it...

C E L A
1.0 out of 5 stars Not the same
Reviewed in the United States on May 14, 2020
I liked the sound when Michael was part of Avalon. But now, it's just not the same and I don't like it. In the past I enjoyed 4 really good voices. Now I can't make the same claim. Maze of Grace was the last great Avalon cd.

UPDATE: Knowing what they did to Michael Passons all these years ago after he came out is inexcusable. Conversation therapy? Really? People are born gay or straight. Nothing can change that.
Read more
Helpful
Comment Report abuse
See all reviews