Add to Cart
$19.99
+ Free Shipping
Sold by: Book Depository US
Have one to sell?
Sell on Amazon
Flip to back Flip to front
Listen Playing... Paused   You're listening to a sample of the Audible audio edition.
Learn more
See all 2 images 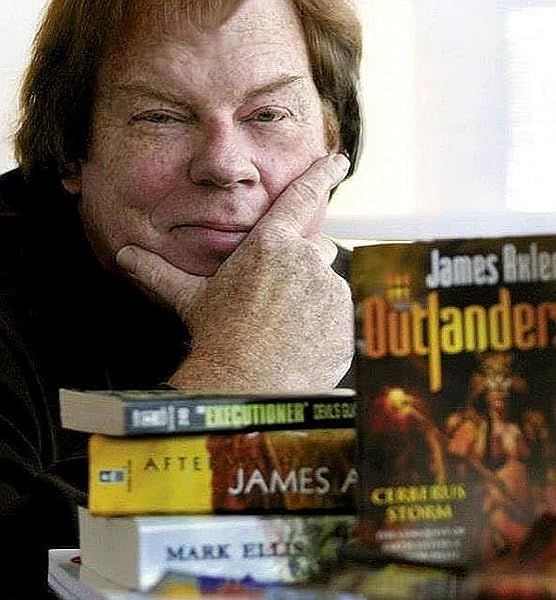 Mark Ellis is a novelist and comics creator whose credentials include Doc Savage, The Wild Wild West, The Justice Machine, King Solomon's Mines and Death Hawk among many others. His 50-plus books include Cryptozoica, The Spur: Loki's Rock, The Everything Guide to Writing Graphic Novels, Knightwatch: Invictus X, and novels in the Executioner and Deathlands series. In 1996, he created the best-selling Outlanders series for Harlequin Enterprise's Gold Eagle imprint, writing under the pen name of James Axler. Outlanders was consecutively published for over eighteen years, making it the most successful mass-market paperback series of the last 30 years. He lives in rural Ireland, with his wife, best-selling author Melissa Martin Ellis.
Start reading Callsign Cerberus: Exile to Hell on your Kindle in under a minute.

Dale
5.0 out of 5 stars THE FUTURE IS NEW AGAIN!
Reviewed in the United States on May 25, 2020
Kane was a good soldier. The best of the Magistrates. He'd always be given the toughest, most dangerous missions and he accepted them willingly, with no questions asked...until today! And suddenly, with in one moment in time, the full weight of Nukeday and its aftermath...and the reason for everything...turned on its head and the world...and KANE...would never be the same.

Mark Ellis, undoubtedly the master of the post apocalyptic, has returned to the world of mutants, magistrates, and world destruction and rebuilding manipulation on the grandest scale as he takes the legacy that he crafted under the house name of James Axler and not only gives it a fresh feel but pushes it into a universe completely on its own severing those ties that bound it to the Deathlands series and pushing it to stand on its own as a world of fear...terror...and wonder. Ellis' love for his creations flows out through the pages as he reintroduces us to Kane, Grant, Brigid, and Domi giving them new direction and new purpose while keeping all those things that made them our favorite post apocalyptic heroes.

Ellis has given us something that authors very rarely get to do with their children and the worlds that they build them into. This is the REBIRTH of a classic series. If you liked the Outlanders adventure and all things James Axler, before, you're going to love this new beginning.

With more to come...