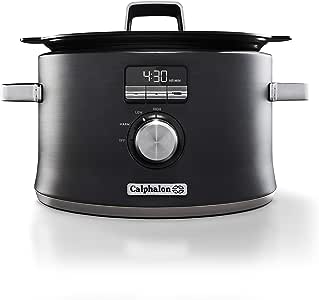 Buy this product as Renewed and save $16.55 from the regular price.

More like this
No results available. Please adjust the filters and try again.
Review
Price
Page 1 of 5
Explore more
$131

Precision Performance for Your Kitchen

Sear, sauté, and slow cook all in one pot with the Calphalon Digital Sauté Slow Cooker. The cooking pot can be removed to brown and sear food on electric, gas, or induction cooktops before slow cooking. The LCD digital display provides intuitive control of the cooking modes. Nonstick ceramic coating cleans easily and delivers more durability than standard nonstick surfaces. The slow cooker is perfect for one-pot dinners with a 5.3-quart capacity and is oven safe.

The Benefits of Calphalon Quality

Sear, brown, sauté, and slow cook all in one pot for maximum flavor with the Calphalon Digital Sauté Slow Cooker. The cooking pot removes and can be placed on electric, gas, or induction cooktops to brown or sear ingredients before slow cooking. The LCD digital display provides intuitive control of multiple cooking modes, for tender pulled pork, curry chicken, paella, and more. The nonstick ceramic coating is easy to clean and delivers 11x more durability* than standard nonstick surfaces, plus it’s PTFE- and PFOA-free. The Calphalon slow cooker is perfect for one-pot family dinners with its 5.3-quart capacity. The cooking pot is also oven safe for further heating, cooking, and warming options. Gorgeous dark stainless steel will enhance any kitchen’s countertop and metal construction provides long-lasting durability.

If you are a seller for this product, would you like to suggest updates through seller support?
Would you like to tell us about a lower price?
Customer Questions & Answers
See questions and answers

4.6 out of 5 stars
4.6 out of 5
198 customer ratings
How does Amazon calculate star ratings?
Amazon calculates a product’s star ratings based on a machine learned model instead of a raw data average. The model takes into account factors including the age of a rating, whether the ratings are from verified purchasers, and factors that establish reviewer trustworthiness.

I Do The Speed Limit
TOP 100 REVIEWERVINE VOICE
4.0 out of 5 stars Great bean pot!
Reviewed in the United States on October 6, 2018
Vine Customer Review of Free Product( What's this? )
This slow cooker is round, not oval. Does it look round to you in the pictures? Not to me, so I thought that might be an important point to make. And, more importantly--to my way of thinking--the inside bottom diameter of the pot is approximately 7 3/8"- 7 1/2", depending on whether you include the slight curve up the inside wall.

So, don't buy this pot if you want to cook a roast or chicken in your slow cooker. It won't fit unless it's really a small cut of meat. Hey, this won't even fit two leg quarters flat in the bottom, so that should give you an idea of the size of this. The side walls come up kind of straight for about 4 1/2", then--for some very odd reason--it flairs out, so that the top inside diameter is an ample 10". And that is why I say it is an ideal bean pot; soup, casserole-type dishes, potatoes, meatballs, sausage, deserts, too.

One nice feature of this slow cooker is that the insert can be used on your cook top. So you can brown ingredients or boil beans, or you can even heat up all your ingredients to give the slow cooker a head start before turning it on.

The insert is suitable for an induction plate or cook top, which is why I decided to order "another?!" slow cooker. I have too many slow cookers, but this one works fine on my induction cook top. The insert has a bottom that is very similar to what you see on Analon and Circulon Induction cookware. Analon and Circulon bottoms tend to scratch my ceramic/glass cook top, so I put paper towels between the cookware and the cook top to prevent that from happening. I've done that with this insert, too. The flat, outside bottom of this insert (that would make contact with your induction element) is 6 1/2" exactly.

With the small size of the inside bottom, you will be able to saute' onions, a mirepoix or 'holy trinity', carrots, garlic, ground meats, meatballs, chunks of meat and smaller cuts of chicken. But it's going to be cramped in there, and to get good browning instead of steaming, you might want to consider going in batches.

Another great feature: It has a glass lid! And the glass lid has a rubbery gasket around its circumference! The lid stays in place, does not shift around, and holds in the steam. And, maybe that is the reason for the odd flare-out of the upper side wall. The condensation easily runs back down into the pot.

The slow cooker works well, but (unlike some Cuisinart slow cookers) it only has a high and low setting. It is light weight and very attractive with its outer shape, style and color.

Flying Cat
5.0 out of 5 stars Amazing Slow Cooker
Reviewed in the United States on April 14, 2019
Verified Purchase
I started by reading Consumer Reports, which I do not trust much anymore, followed by reading Amazon reviews on brands and models recommended by Consumer Reports. Not surprisingly, many of the ones recommended by Consumer Reports did NOT have high ratings in Amazon.
I chose the Calphalon Digital Sauté Slow Cooker because it is the only slow cooker which gets great Amazon reviews about its temperature accuracy, ease of use, and attractive looks.
You will not regret buying the Calphalon slow cooker.
Read more
59 people found this helpful
Helpful
Comment Report abuse

Tom Steele
TOP 100 REVIEWERVINE VOICE
4.0 out of 5 stars Very nice, but pricey!
Reviewed in the United States on October 3, 2018
Vine Customer Review of Free Product( What's this? )
We have been cooking with a "slow cooker" or we refer to it as another brand name slow cooker that has sort of become the standardized name for slow cookers now - kind of like how people ask for a Kleenex when they want a tissue.

I would say that unless you have significant disposable income, you would be better off buying a much less expensive slow cooker, using Amazon's compare feature and get a cooker that has the same features at a fraction of the cost. But if you consider the appearance of the slow cooker to be important, or if you are willing to pay for the conveniences it offers, then perhaps this IS worth the extra money. Here's why...

First, it is nice that this is induction and gas cooking options. If you own an induction stove top, then that becomes a very important and nice feature. If you, like me, are cooking with gas, again it can be nice.

We cook a LOT with the slow cooker. If you aren't familiar with slow cookers, there are a lot of good recipes that are easy, healthy and tasty. Plus, your whole house smells delicious after eight hours of simmering a delicious recipe in your kitchen. But sometimes the slow cooker recipes start to all taste, and more noticeably, FEEL the same way. There is no browning the outside, or any other type of cooking except a long, slow simmer that breaks everything down into a mush of good flavor, but very little texture.

With the Calphalon Digital Saute Slow Cooker, you can easily use your gas or induction stovetop to brown the outside of the meat before slow cooking it all day long. You can use the different menu items and recipes to start right off with some nice recipes. We love using the slow cooker for roast. The roast is SO MUCH better if you brown the outsides of the roast before slow cooking it. In the past, I would have to brown the roasts in a pan, then switch it over to the Slow Cooker. Now I can just brown the roast in the slow cooker pot, then put the pot into the Slow Cooker base and simply finish the recipe and we end up with a great, intact, browned roast that is soft and tender - while still having texture and flavor.

Also, it looks nice. If you have spent a great deal of money on your kitchen with range hood and nice stove top and cabinetry and you want your cooker to look like another high end piece of your kitchen ware, then this looks like a million bucks, or at least $100!

I would say this is a five star cooker, with one star removed for the upper echelon pricing, making it a slight bit less of a bargain or value. But for the "money is no object" household who want the best utensils and tools to cook, this is a great slow cooker!
Read more
69 people found this helpful
Helpful
Comment Report abuse

BigA
5.0 out of 5 stars Finally a slow cooker that isn't junk.
Reviewed in the United States on July 1, 2019
Verified Purchase
After a short time, we are very happy with the cooker. Black bean soup cooking within 10 minutes of finding the box at the door. The thing looks like high-quality. The insert is substantial and looks as if it will hold up to the stove top and cleaning. The top fits better than any of the 2,321 other crock pots we've blown through. It's got a great seal with a steamhole. Perfect. The best thing about it is the control flexibility. There is no guessing or relying on the pot. Set the time and heat setting and the digital display tells you exactly where you are. The thing heats uniformly and seems to be calibrated correctly in terms of the setting matching the heat level. The soup cooked perfectly. You won't get a better pot for the price. Buy one.
Read more
33 people found this helpful
Helpful
Comment Report abuse
See all reviews from the United States

SCOTT COOPER
4.0 out of 5 stars S'okay, but...
Reviewed in Canada on January 2, 2020
Verified Purchase
The pot works fine. My only complaint is that it was shipped in it's slow cooker box, so it was left sitting at our front door advertising what it was around Christmas time. Bonus: it was an Xmas gift my wife had asked for & she was the one who found it at the door.
Read more
Helpful
Sending feedback...
Thank you for your feedback.
Sorry, we failed to record your vote. Please try again
Report abuse

Metalchica
5.0 out of 5 stars Great Product
Reviewed in Canada on July 8, 2019
Verified Purchase
Smaller than the typical slow cooker but much easier to clean and use. Really convenient features.
Read more
2 people found this helpful
Helpful
Sending feedback...
Thank you for your feedback.
Sorry, we failed to record your vote. Please try again
Report abuse