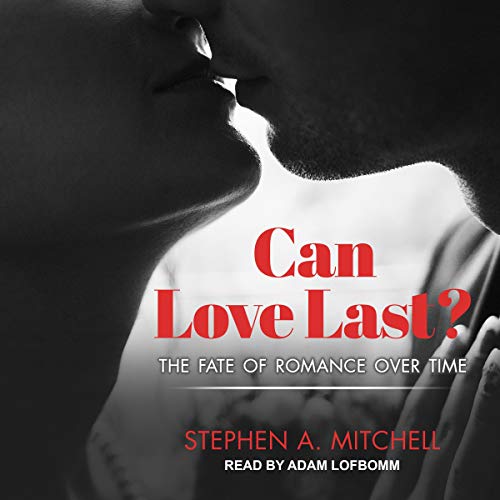 Can Love Last?: The Fate of Romance over Time

Stephen A. Mitchell (Author), Adam Lofbomm (Narrator), Tantor Audio (Publisher) & 0 more
4.4 out of 5 stars 104 ratings
See all formats and editions
Sorry, there was a problem loading this page. Try again.

A fascinating look at the key components of romantic love - sex, idealization, aggression, self-pity, guilt, and commitment - argues that romance does not diminish in a long-term relationship, describes the barriers to lasting love, and offers helpful advice on how to promote an enduring love by eliminating self-destructive efforts to protect oneself from its risks.

Bo Lee
2.0 out of 5 stars Brainy, arguably brilliant but a useless book
Reviewed in the United States 🇺🇸 on June 5, 2022
Verified Purchase
Good writing is clear writing. Good writing does not hide behind too many fancy words or make references every other sentences to make a point. This book maybe appreciated by Stephen Mitchell's colleagues, who are professional therapists or academics, but to an average reader trying to understand the subject matter this book is a waste of time that goes through, circles, weaves together everything and anything that can be thrown at the subject matter to make a big impression but misses the mark. I am sure Stephen was a learned person who was accomplished. But his writing in this book is a patchwork or a hodgepodge thoughts from multiple fields and masters that briefly touches upon some well known ideas at the expense of not expressing Stephen's ideas fully in understandable and useful ways that a reader with this subject as interest in mind. I love the subject matter. I appreciate some of the idea references from famous experts but ended up returning the book for a refund feeling dissatisfied, having still my hunger for answers.
Read more
One person found this helpful
Helpful
Report abuse

Frank Selden
4.0 out of 5 stars Not a rhetorical question any more
Reviewed in the United States 🇺🇸 on January 17, 2016
Verified Purchase
Can Love Last is a question lovers often ask. At first I thought the book jumped around a lot. It doesn't. Instead, Mitchell looks at the question from many angles, like holding a diamond up to the light and turning it to examine the quality through multiple facets. He mixes true character stories with practical wisdom. Can Love Last? is not just a rhetorical question or a theme for easy listening ballads. Sometimes I bring past memories and judgments of previous relationships into my current amazing relationship. This book helped me see how I can let go of my stories and focus on what is important for this relationship to last as I desire.
Read more
6 people found this helpful
Helpful
Report abuse

Jean
5.0 out of 5 stars Great Book
Reviewed in the United States 🇺🇸 on September 1, 2019
Verified Purchase
If you've ever loved and lost, then this is the book for you. Comforting. Bracing you with reality. This narrative rekindles your own memories and allows you to relive the highlights in your own life of being in love. It also holds your hand as you recall the dissolution of that love. Lots of wisdom between its covers. An easy delight to read.
Read more
4 people found this helpful
Helpful
Report abuse

jenjen
4.0 out of 5 stars Good Advice
Reviewed in the United States 🇺🇸 on January 10, 2016
Verified Purchase
An interesting take on making romance last over time, this emphasizes the risk involved in committing to loving. We invest emotionally in our relationships and thereby make things safe to prevent pain. However, this tends to kill whatever thrills begin our relationships and make them so passionate. It's a challenge to continue to recognize this process and keep a balance between safety in relationships and excitement.
Read more
3 people found this helpful
Helpful
Report abuse

Doly Mallet Flores
5.0 out of 5 stars The best book I have ever read on Love
Reviewed in the United States 🇺🇸 on November 22, 2015
Verified Purchase
The best book I have ever read on Love. This is not bulls*** about "rules", or "things you have to do", neither is "self-help" or "how to fix yourself". Stephen Mitchell was one of the most important relational psychoanalysts, and he made the most profund, deep, serious analysis on how our unconscious works when we fall in love. This book is not hopeful, it doesn't present a typical "happy ending", it is realistic. It is shocking, but so truthful, you will be greateful and more prepared for your relationships.
Read more
4 people found this helpful
Helpful
Report abuse

morehumanthanhuman
4.0 out of 5 stars Thought-provoking
Reviewed in the United States 🇺🇸 on August 27, 2015
Verified Purchase
This is a beautifully written and thought-provoking read. Mitchell absolutely avoids the glib or the language of easy fixes. It's an exploration more than a "how-to." It has the potential to be interesting to everyone, regardless of their current relationship status.
Read more
One person found this helpful
Helpful
Report abuse

Chelsea
4.0 out of 5 stars Great guidance on relationships
Reviewed in the United States 🇺🇸 on July 8, 2017
Verified Purchase
Loved this book. The writing style is a bit dense but I still really enjoyed the material. I think it's going to help me in my future relationships.
Read more
Helpful
Report abuse

Lark
4.0 out of 5 stars Who wrote the book of love?
Reviewed in the United Kingdom 🇬🇧 on February 6, 2012
Verified Purchase
This has been a topic which has intrigued me for some time, having read Erich Fromm's popular psychology read  The Art of Loving: Classics of Personal Development , John Armstrong's philosophical book Conditions of Love: The Philosophy of Intimacy , the disappointing  Essays In Love  and some of the more scientific research such as  The Science of Love .

Mitchell's text recommends itself as a highly readable one, it should appeal equally to either an academic/therapist readership or a popular/general readership, although if you are a theorist you will experience some well trodden ground being navigated once more. However, that is not to suggest that it is any the less readable, I really found Mitchell's own evaluations of theories and their progress from the early days of Freud's reductive perspective to present day social construction theories engaging and informative. While the key aspects of Mitchell's own theorising, the relational, intersubjective perspective, rooted in social constructivist theories are only really touched upon they are very clear, without being simplistic.

There is an excellent and warm foreword by Margaret Black, the first chapter, Safety and Adventure, is a kind of overview introducing many of the main themes, while the following chapters looks at precise aspects of love, or precise topics which speak as core or significant themes in the idea of love, these include sexuality, fantasy, agression, guilt and self-pity and finally commitment. There are case studies through out, some of this content I skipped, it was not as interesting and I felt sometimes was added only to further illustrate points which had already been made but I undrestand it could appeal to someone who was searching for more concrete or personal examples of what was being discussed.

I really liked the extent to which the twin pillars of Freud's theorising, sexuality and aggression, were dealt with and integrated or included in the text, as I tend to find that a lot of authors (including Fromm) treat Freud as though there were "two freuds", seperating the early psychosexual theorising from the later "pessimistic" "thantos" and "death instinct" Freud. While Mitchell plans at the outset to discuss romanticism in more than the simply personal sense, as he states himself, this book deals mainly with the personal, small scale, love relationships. It is readable but also thought provoking and no prior knowledge or acquaintence with the theorists featured in the narrative is needed or requisit to enjoy the book or learn from it. It made me rethink a number of things but it does not do so in a way in which is likely to be a disappointment or deflating disillusionment to the reader either.

Charles Clifton Forex Trader
2.0 out of 5 stars Verbose to the point of unreadability.
Reviewed in the United Kingdom 🇬🇧 on January 7, 2022
Verified Purchase
50 pages in yet only covered 5 or 6 pages of content. Doubt I'll finish this title before moving on to something written for the benefit of the reader... Something of a shame as I feel Mitchell may actually have something to say burried beneath the needless waffle.
Read more
Report abuse

Cliente Amazon
5.0 out of 5 stars Great book
Reviewed in Spain 🇪🇸 on July 21, 2016
Verified Purchase
Great book, I has lost it. It is the second time I buy it, I really enjoy the way he used to put in a simple way concepts developed in other books.
Read more
Report abuse