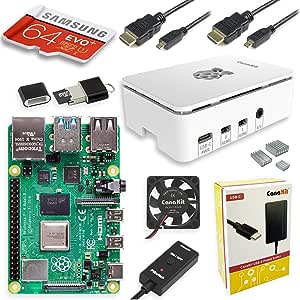 CanaKit is a leader in high quality products and accessories to make, learn and design with the Raspberry Pi.

An exclusive kit from CanaKit that includes the latest generation model of the Raspberry Pi family: The Raspberry Pi 4 4GB and everything you need to get up and running within minutes in the exciting world of Raspberry Pi!

4.8 out of 5 stars
4.8 out of 5
1,499 global ratings
How are ratings calculated?
To calculate the overall star rating and percentage breakdown by star, we don’t use a simple average. Instead, our system considers things like how recent a review is and if the reviewer bought the item on Amazon. It also analyzes reviews to verify trustworthiness.

Chip Overclock®
5.0 out of 5 stars You can't eat just one!
Reviewed in the United States on December 10, 2019
Capacity: 4GB RAMVerified Purchase
Just took delivery of a CanaKit Raspberry Pi 4 starter MAX Kit. This Pi will join nine others permanently installed and running 24x7 in my home. This particular Pi will become an Apache web server. But other applications include: an NTP server incorporating a chip-scale cesium atomic clock, a WWVB clock, two GPS clocks, a GPS/NTP real-time monitor, and a four dedicated to a differential GNSS project. That doesn't include probably a dozen more in storage that played roles in projects like an IPv6 test bed.

All of these were CanaKits, with various models of the Raspberry Pi. I like the kits because [1] they come with just about everything I need, [2] they work, [3] they are reasonably priced, and finally [4] I can order them from Amazon with just about zero effort and get them in a couple of days.

I run all of my Raspberry Pis headless, only using a monitor, keyboard, and mouse for initial set up. After that, I manage them mostly by using SSH to log into them remotely over my home network, typically wirelessly.

I started out with UNIX when I installed 4.2 BSD on a VAX 750 decades ago. I was thrilled when I bought a set of CDs with the Yggdrasil Linux distro on them and installed Linux on a (relatively speaking) ginormous tower PC in my home. Now I order a CanaKit from Amazon and a couple of days later I have yet another Linux system, small enough to fit in a pocket up, and running.
Read more
88 people found this helpful
Helpful
Report abuse

Amazon Customer
5.0 out of 5 stars A 50/50 chance of dead on arrival is normal for pc related electronics.
Reviewed in the United States on October 8, 2019
Capacity: 4GB RAMVerified Purchase
If your pi arrives non functional dont get discouraged, A 50/50 chance of dead on arrival is completely normal for pc related electronics no matter where you buy them from. Both amazon and canakit have no issue sending out a new unit if yours arrives DOA. Keep in mind this version of raspberry pi is still fairly new and allot of the software available for previous models (like Retropie for example) are not working on the pi 4 yet. Performance wise the 4 is big upgrade over the 3 b+ and will just get better once the software developers catch up.
Read more
45 people found this helpful
Helpful
Report abuse

Amazon Customer
5.0 out of 5 stars Great Kit
Reviewed in the United States on October 8, 2019
Capacity: 4GB RAMVerified PurchaseEarly Reviewer Rewards(What's this?)
This kit is a great starter kit, contains everything listed. If you're interested in getting started with a RPi system, and don't have much experience, this is a great starting point. One note: make sure that you have the proper peripherals and methods of hooking them up, Monitor (HMDI), Mouse (USB), & Keyboard (USB). Happy computing!
Read more
32 people found this helpful
Helpful
Report abuse

publius
4.0 out of 5 stars Kit worth it for beginners. But, note the high board markup.
Reviewed in the United States on December 25, 2019
Capacity: 4GB RAMVerified Purchase
Of all the Raspberry Pi’s, the Pi 4B 4GB is by far the most accessible and useful, especially for those wanting more of a Linux computer experience (even for beginners) at a low cost. However, the markups for simple pi boards (not kits, necessarily) is ridiculous...everywhere. The 4GB board released at about $55, in bulk. A little cheaper. For a complete noob, any kit with a pre-loaded chip is worth it. For anyone else, putting your own kit together, including downloading the free NOOBS pi os, and everything else/anything else is free to install on your own. That said, this way is an expensive but no hassle, beginner friendly, way to start with a really cool pi. I just put a SATA drive on this one, so it really is, more or less a lite Linux computer w 4GB ram 64 mb processor and however much ssd/HDD you want (w/o memory sticks). Anyway, always keep the stuff you don’t use and find the endless fun to be had in a pi. (I wasn’t interested in the touch screen for this, just a monitor, so I can’t say anything good or bad about that, and it wasn’t in this kit. But, what I can say is that if you have a monitor/tv get familiar with the pi before you get a dedicated screen, then you can decide if it’s worth getting the casing and screen (casing makes it $$). Because you could figure out a pi zero too.) and if it’s not you, give it to someone/a school—who may be able to find someone interested in it.
Read more
17 people found this helpful
Helpful
Report abuse

Jay L
5.0 out of 5 stars Get started quick with this kit
Reviewed in the United States on December 27, 2019
Capacity: 4GB RAMVerified Purchase
I know my way around a computer, but not a Raspberry Pi. I've been wanting a Pi for years and finally bought this kit as I wanted all the parts I would potentially need so I could get started quickly. Assembly was completed in about 10 minutes. Getting the OS going was very simple, thanks to the pre-loaded SD card. I had an operational Pi in about an hour. Very impressed!

Although the CPU is staying cool, I don't think airflow is optimal, due to the fruit-shaped fan outlet in the case. Perhaps a simple circle the diameter of the fan would've sufficed, albeit not as "pretty". I'll probably cut the case a bit to allow more air to be exhausted.
Read more
13 people found this helpful
Helpful
Report abuse

JEM
5.0 out of 5 stars RaspberryPi turned PiHole server
Reviewed in the United States on January 28, 2020
Capacity: 4GB RAMVerified Purchase
I received, unpackaged, and deployed PiHole on this Pi within the hour of receiving it. It was really nice to have NOOBS installed on the SD card as it made for an easy installation of the full RaspberryPi OS. I think OS install took about 15 minutes or so. I didn’t really time it.

The case is nice. Pieces together easily. As others have said, be careful when you install the Pi logic board as it has to slide in a certain way or risk chance of crushing board. The mounting hole on the bottom panel make for mounting on a surface easy.

While the fan does fit, i feel the ventilation cutout (RaspberryPi logo) may not be adequate for proper airflow.

The Pi has been running at a stable 110 degrees. I will be flipping the fan over to see if there is a temperature drop/increase.

Otherwise, overall, it is a nice kit. I recommend it if you’re not wanting to research compatible parts.
Read more
13 people found this helpful
Helpful
Report abuse

Zer0 Divide
4.0 out of 5 stars One of the best Raspberry Pi Kits our there
Reviewed in the United States on November 20, 2019
Capacity: 4GB RAMVerified Purchase
Great little Raspberry Pi Kit.
Ubuntu just announced support for Version4 but there’s an issues with the USB Ports on the 4Gig Model for 19.10 but you can get an 18.3 version just fine.
Read more
15 people found this helpful
Helpful
Report abuse
See all reviews

Jovita Correia
5.0 out of 5 stars Bought it as a gift
Reviewed in the United Kingdom on February 19, 2021
Capacity: 8GB RAMVerified Purchase
Bought it as a gift, my husband loved it ( he had already some raspberry Pi so I knew he would be happy with one more)
Read more
Report abuse