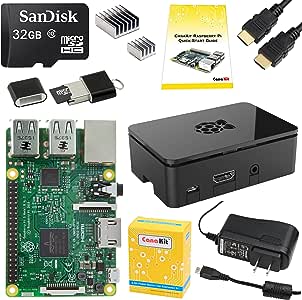 Visit the CanaKit Store
4.7 out of 5 stars 2,746 ratings
| 420 answered questions
Available at a lower price from other sellers that may not offer free Prime shipping.

CanaKit is a leader in high quality products and accessories to make, learn and design with the Raspberry Pi.

An exclusive Starter Kit from CanaKit that includes the Raspberry Pi 3 Model B and everything you need to get up and running within minutes in the exciting world of Raspberry Pi!

4.7 out of 5 stars
4.7 out of 5
2,746 global ratings
How are ratings calculated?
To calculate the overall star rating and percentage breakdown by star, we don’t use a simple average. Instead, our system considers things like how recent a review is and if the reviewer bought the item on Amazon. It also analyzes reviews to verify trustworthiness.

Apollo Clark
4.0 out of 5 stars Great starter kit, but you can get better performance buying parts individually.
Reviewed in the United States on September 19, 2016
Verified Purchase
Really good starter kit. However, if you want the best performance from your Raspberry Pi 3, buy the components individually.

The included Kingston memory card is decent, but not great. For the top microSD performance, grab a Samsung EVO+, or Samsung Pro+, or Sandisk Extreme card. The 32GB capacity is a sweet spot for performance and cost. If you want to run Raspbian, Ubuntu Mate, Retropie, or any distro with a desktop, you'll need at least 3.5GB; making an 8GB card usable but not comfortable. A 16GB card would be perfect, but you'll get better read / write performance out of a 32GB card, and the cost is a couple dollars more. There is an $8 difference between the EVO+ vs. the Pro+ or Extreme, for a < 10% performance increase. To see a performance comparison, search for "Pi Dramble microSD Card Benchmarks"

I threw away the included microSD card reader. It wouldn't even fit the microSD card correctly. It's better to get a microSD to SD card adapter, and use an existing SD card reader you already have on your laptop or desktop. However, the builtin SD card readers don't have the best performance. To speed that up, grab a "Sandisk Extreme PRO Card Reader", which uses USB 3.0. My Asus UX305CA ultrabook laptop went from 15 MB/sec write transfer to 25 MB/sec.

The case looks nice, and is sturdy, but doesn't give the best cooling. If you overclock the CPU, SDRAM, and GPU, you'll spike the system temperature up to 75 C / 167 F. The firmware is set to throttle the CPU when it hits 80 C / 176 F. To overcome this, get a case with a fan. I suggest the "Makerfire Raspberry Pi B+ Case Protective Case Enclosure Box with Mini Cooling Fan Heatsink Kit" (plastic, can easily remove microSD), or from EleDuino (aluminum, cannot easily remove microSD). The Canakit case, without a fan, was hitting 75 C / 167 F running FF7 on PSX in Retropie. The Makerfire case, fan running, was getting 52 C / 126 F running FF7 on PSX in Retropie. I was really surprised, and re-ran the test, playing the game for 30 min each time to let it stabilize, and got the same results. Ambient temperature was 22 C / 71 F in Boston.

If you are going to overclock the system, you'll want a slightly higher powered adapter. The one included in the kit is 5V 2.5A. You can get a 5V 3A w/ micro USB power adapter from NorthPada. 3A output is the maximum supported by the USB 2.0 standard. The included power adapter is fine if you won't be overclocking. Be careful with power settings, you can "overclock the USB", to go from 600mAh to 1200mAh, which will help with supporting higher powered USB devices. However, it's not reliable when used with power hungry devices like external harddrives. If you do want to attach harddrives, power them through a USB hub, and attach the hub to the Raspberry Pi.

The downside to running any Raspberry Pi is getting all of the USB dongles to fit. Check out the 6" USB cables from StarTech and Tripp Lite. You can get USB 3.0, USB 2.0, micro USB, mini USB, and USB extension cables. I use 4x USB 6" extension cables, and can comfortably fit USB memory sticks and larger RTL-SDR software defined radio dongles.

There's no keyboard and mouse included. It's effectively required to have one, for configuration. I have an inexpensive one from Jelly Comb, the "Jelly Comb 2.4G Ultra Slim Portable Wireless Keyboard and Mouse Combo", using a single USB receiver. If you want to run Retropie / EmulationStation, and play PSX, N64, SNES, NES, and older system games, grab a couple of "Vmargera USB Double Shock Controller GamePad" controllers; they use one USB connection per controller.

If you want to use the RPi3 to run as an HTPC settop media player box, check out OSMC, and grab a remote w/ USB receiver. I have one from X-Strong. There is a variety of them, mostly intended for Android devices. The downside is that Debian and Ubuntu will not natively run Netflix, they just don't have enough GPU to process Silverlight through the browser. However, you can install Android Marshmallow, and use the Android Netflix app.

Wifi is decent on the device, but not amazing. You can't expect high throughput from an embedded wifi chip without an external antenna. If you do want faster speeds with low latency, look into a wifi AC 600Mbps USB dongle. I got the "Edimax EW-7811UAC 11AC" dongle coming soon, and reviews say it is compatible.

Overall, I really like the kit. It's the first one I've bought, and learned a lot with it. If you want a quick and simple kit, get this. If you want to overclock and get the best performance, grab the components I listed above.

I had to install an old USB Wifi dongle I have used on previous Raspberrys to get to the internet initially. I could also could have directly plugged in a RJ45 network cable and connected to my network, but where my Raspberrys are located there is no CAT5 cabling and I rely entirely on WIFI (and where my regular PC is I do not have a HDMI capable monitor...). Not a big deal if you follow instructions below, but was a bit disappointed in Canna Kit for shipping products that have MicroSD cards that do not have the correct software version on it.

Anyway, if you run into this issue it is easy to fix:
• Just connect your Rapsberry PI 3 to the internet using either another wifi dongle or using a network cable. then let it connect up to the network as usual
• Once connected open the terminal window and run "sudo apt-get update" to update the existing software, and then run "sudo apt-get upgrade" to upgrade the software to the latest version. Very easy and just takes a couple of minutes.

Hopefully CannaKit will get revised versions of their MicroSD cards loaded with a more recent OS version soon so you don't have to bother with this, as it was confusing at first as to why it could not see WIFI and less experienced users might think the Raspberry PI 3 was broken and send it back....
Read more
704 people found this helpful
Helpful
Comment Report abuse

Rudy
4.0 out of 5 stars the little box that could!!
Reviewed in the United States on November 4, 2017
Verified Purchase
this thing is a gem! cheap, easy to get started and reliable. I have been looking for something easy to get 80's and 90's nostalgia, and this little box fi the bill perfectly. paired it with retropie and it was up and running within a few minutes.
PROS-
super fast
small form factor
no case fan (but you can add one if you want to, not really needed
easily recognized peripherals ( keyboard and logitech usb controller)

Cons:
NO on/off switch. (biggest bone head move ever) but you can buy on one amazon for a few dollars.
linux operating system-learning curve for sure.
if it hadn't been for the lack of the on/off switch i would have given this five stars.

i didn't use the included NOOBS. i just deleted the pre-installed image and installed retropie. now, i can play all my favorite 80's and 90's games. this thing will run everything from atari up to sega cd without issue. just google search "retropie" and you can find all the information you need. its as simple as mounting a iso image to a micro sd card. very easy, and fun to do.
over the past year, i have looked and looked at retailers for NES and SNES classic, but Nintendo, in their "wisdom", decided to only release a FEW of these. wasn't going to go on ebay and pay 2, 3, or 4 times what console was worth. so i went this route and i'm glad i did. this kit had everything i needed and i was playing my favorite classics in minutes. get one today, these little machines are great!
Read more
10 people found this helpful
Helpful
Comment Report abuse
See all reviews

Page 1 of 1 Start overPage 1 of 1
This shopping feature will continue to load items when the Enter key is pressed. In order to navigate out of this carousel please use your heading shortcut key to navigate to the next or previous heading.
Back
Next
Pages with related products. See and discover other items: barebones computer kit, raspberry pi 2 bluetooth, raspberry pi 3 gpio, raspberry pi 3 wifi, raspberry pi wifi