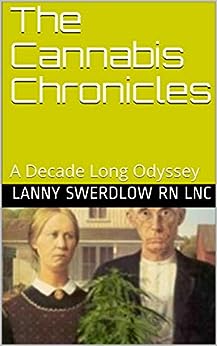 by Lanny Swerdlow RN LNC (Author) Format: Kindle Edition
See all formats and editions
Sorry, there was a problem loading this page. Try again.
In June 2009, Culture Magazine began publishing in southern California. Describing the new magazine as the Medical Marijuana Lifestyle magazine, its mission was to inform and entertain about cannabis issues. As time marched forward and cannabis legalization began to spread throughout the country, the magazine’s description was changed to the #1 Cannabis Lifestyle magazine.

Hired as a columnist for the very first issue, I began writing a column entitled Healthy Living and continued writing that column for the next decade until Culture ceased print publication in 2019. The Cannabis Chronicles is a collection of all these columns written over the decade that saw cannabis enter the age of legalization.

Although there is a little veering into the political and legal issues, for the most part the columns dealt with the vast expanse of subjects dealing with health and wellness from cannabis as a substitute for alcohol to cannabis as a substitute for Zoloft. The 120 chapters which I call Chronicles, are presented chronologically starting with the first one in June 2009 and ending with the last column in December 2019.

The decade in which these columns were published witnessed the transformation of cannabis from a medically suspect plant with 44% of Americans in support for legalization to today’s overwhelming acceptance with 70% in favor of legalization and almost 90% in support of its medical use.

Although I have always been a staunch advocate of legalizing cannabis, the columns reflect the changing attitudes towards cannabis. One of the more subtle but telling areas is how the columns slowly moved away from using the slang term marijuana when referring to the plant to the more respectful scientific term cannabis. Reading the columns in chronological order becomes a pathway to understanding and savoring the progression of cannabis from demon weed to its listing as an essential item whose retail stores were allowed to stay open during the Covid19 lockdowns.

The Cannabis Chronicles cover a vast array of subjects dealing with the multitude of health benefits derived by the use of cannabis. Cancer, Parkinson’s, Alzheimer’s, epilepsy, insomnia, depression, immunity, life extension, neurogenesis, pain mitigation and more are covered along with lifestyle enhancements with six articles specifically and titillatingly detailing the benefits of cannabis for sex.

As an RN, I have always felt the most important use of cannabis is as an alternative to alcohol for socialization, celebration and consciousness alteration. Several of the Chronicles make clear that cannabis makes our communities safer and healthier as a substitute for alcohol as well as for opioids which plagues our nation with deaths and ruined lives.

With Chronicles exploring the use of cannabis by veterans, children, senior citizens, Fido and Fluffy and so many more, the Cannabis Chronicles vehemently proclaim and explain the importance of cannabis to the health and wellness of the individual and the community.

It is noteworthy that the very last column I wrote for Culture that was published in the last printed issue in December 2019, was an overview of the grand spectrum of cannabis use that I had covered in a decade of Healthy Living columns. Entitled “Cannabis is good for the entire community’s health,” it conceptualized the essential importance of cannabis for our wholistic well-being from expectant mothers and the beginning of life to senior citizens nearing the end of life and suffering from the ailments of advancing years.

Whether it is called cannabis, marijuana, ganja, weed or any of the 200 names ascribe to it over the 5,000-year history of recorded human use, The Cannabis Chronicles affirms, declares and validates that this ancient medicinal herb makes life better for everyone.
Read more
Previous page
Next page

Ruth
5.0 out of 5 stars very relevant today
Reviewed in the United States 🇺🇸 on April 13, 2021
Verified Purchase
I liked the broad range of topics. Except for some legal changes in the law, the substance of the articles is very insightful even today. For instance Chronicle 1 sites the research by Dr. Manual Gutzman in 2003 describing how cannabinoids fight cancer. It is easy to see that Lanny is still fighting for legalizing weed everywhere.
Read more
Helpful
Report abuse
See all reviews
Report an issue
Does this item contain inappropriate content?
Report
Do you believe that this item violates a copyright?
Report
Does this item contain quality or formatting issues?
Report