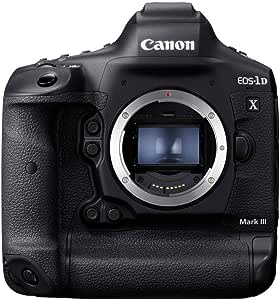 Visit the Canon Store
5.0 out of 5 stars 17 ratings
| 3 answered questions
Available at a lower price from other sellers that may not offer free Prime shipping.

The EOS-1D X Mark III is like nothing before it, with a totally new imaging system. New AF sensors. The fastest, most durable Canon shutter yet. Innovative mirror control. The most powerful video features in an EOS DSLR to date—and more. It's the next level in pro SLR quality, speed and reliability.

The EOS-1D X Mark III offers high level of performance an EOS DSLR has ever possessed, changing the game for serious photographers around the world. a powerful new 20. Megapixel Full-frame CMOS sensor, combined with a cutting-edge new DIGIC X image processor, for truly outstanding stills and video. subjects with incredible focus using the new 191-point AF system — including innovative new Head Detection AF technology (EOS iTR AF X) — along with faster continuous shooting speeds of up to 16 fps with the viewfinder and up to 20 fps in Live View mode. EOS-1D X Mark III is also our most powerful DSLR for video to date, equipped with 4K 60p video capability, plus the option to shoot 5. RAW video or 10-bit video with Canon Log, both recorded internally to CFexpress cards. with built-in Wi-Fi ** for the first time ever in an EOS-1D series, this revolutionary, weather-sealed camera offers the connectivity to share photos and videos with clients, colleagues or family from virtually anywhere. EOS-1D X Mark III — raising the bar on pro DSLR quality and performance.

Would you like to tell us about a lower price?
Read about our customers' top-rated cameras on our review page: Point-and-Shoot Cameras
Customer Questions & Answers
See questions and answers

5.0 out of 5 stars
5 out of 5
17 global ratings
How are ratings calculated?
To calculate the overall star rating and percentage breakdown by star, we don’t use a simple average. Instead, our system considers things like how recent a review is and if the reviewer bought the item on Amazon. It also analyzes reviews to verify trustworthiness.

William D. Colburn
VINE VOICE
5.0 out of 5 stars Probably the last professional DSLR from Canon
Reviewed in the United States on February 19, 2020
Verified Purchase
Update 5! Ownership of this camera has thrust me into a strange dream world. An unpopulated dream world. The streets are empty, no one is in the hallways at work, and both pollution and toilet paper have disappeared. It still takes nice pictures, but of an empty world.

Update 4! The underexposed pictures seem to be user error on my part. The new camera is a little different than the old one, and I didn't have the settings set the same was as my mark II, so I wasn't getting the pictures I expected.

Update 3! Still five stars, and yesterday's rugby game was canceled, so no new updates there. There was 900 pictures of anime cosplay today, and I feel like the camera underexposes in general, at least compared to previous iterations of the camera. The autofocus is still amazing. The frames per second puts this into Warthog territory (Brrrt). I never bent a pin on the nine previous cameras with CF cards I owned, but the new CFExpress cards seem much more robust then the CF cards, which is reassuring.

Update 2! Still five stars. I haven't had another sporting event, so no progress on getting the autofocus to feel as good as my 1D-X mark II during sporting events. Regular usage I can tell that this is a much better camera. I called 1-800-GO-CANON about the lack of a manual. I'm told that Canon will sell me a manual, and I was given a number to call. I'll be doing that, because I need a manual for this. It really should have come with it.

Update! I photographed a rugby game today. I now realize the manual isn't just "less well developed", it's not even really a manual. It's sort of an overview or outline of what might be in a real manual. It was absolutely useless out on the rugby field trying to figure something out. This is a complicated camera not to come with a real manual!

The autofocus on live view mode is very good. Not good enough to do sports photography with, but I'm sure Canon will figure that out eventually. The live view autofocus with a 600mm lens, and two 2x extenders was pretty good. When it lost focus, it really lost focus, and had to be manually brought back into line.

The new autofocus is very different in how it reacts and feels. At the start of the rugby game it felt much worse than my 1D X mark II autofocus. By the end of the game, I was getting closer to being happy with it, but with no real manual it was a difficult process to try and work my way through the various menus.

Original: I've only had it since yesterday. I have minor complaints. The bundled card reader only had a usb-c style connector on both ends. Most of my computers only have the older ("normal") usb connector. The only usb-c I have available is my laptop, which uses wireless, so it isn't very fast to download. The manual seems less well developed that what I'm used to from previous bodies.

Beyond that, the look and feel is what I expect, simply amazing. The menu system is improved, with numbers to indicate which menu I'm on, which is helpful when Canon support calls out menus by number but they aren't numbered and you have to hand count them. I tried some pictures in near total darkness and the highest ISO setting is simply appalling, but the camera took recognizable pictures of things I couldn't see, so I'm quite happy.

It is nice having two cards slots that use the same card. I sort of which I had an option for an SD card. One of my previous cameras had that, and when someone wanted me to take a picture with their camera I would, but I'd also swap their card in and take one with my camera too, onto their card.

Mirrorless is the future, and this camera is reportedly a testbed for pro-level mirrorless, so I expect this will be the last DSLR of this type made by Canon.

John Fastenow
5.0 out of 5 stars A true Canon
Reviewed in the United States on July 18, 2020
Verified Purchase
This is a beast of a camera, the 1DxMII is fantastic but this one is incremental in many ways but a leap in others. IMHO a less strong AA filter is great I seem to get sharper images from this than I do from the MKII not that hat camera is bad, this one one is better IMHO .. auto focus seems better and a bit faster if that is possible as the MKII is very fast and accurate. Battery life seems to be better as well.
Read more

Michael Leach
5.0 out of 5 stars The top dog from canon
Reviewed in the United States on June 4, 2020
Verified Purchase
Love this just need to figure out all the bells and whistles
Read more
Helpful
Comment Report abuse

Frank R.Top Contributor: Photography
5.0 out of 5 stars Everything you've heard is true
Reviewed in the United States on February 29, 2020
I've had mine about two weeks now, upgrading from a 1Dx Mk II, a 5D Mk IV and a 7D Mk II. Nothing about his had disappointed me. The autofocus is truly amazing--I tracked a seagull flying by with 138 frames all in focus. That didn't fill the buffer though the shutter clicks slowed down from the initial 16 frames per second; no idea how slow they got but I'd guess still above 10 frames per second. Noise at 12,800 is impressively low, and though I can't see myself ever using a shot at 51,200, it's not bad. The osprey pic is 12,800; the teddy bear at 51,200. I did find, btw, that high-ISO shots look better if you overexpose what the meter is calling for; that's probably true with other Canon cameras but I don't usually shoot at 51,200 so I'm hardly an expert.

I've only done a little video but the eye detection was as advertised: spot on. The digital image stabilizing was helpful, improving the shots over the 24-105 f/4 IS lens stabilization alone. The bird shots were done using a cheap Sigma 150-600(C) zoom and the camera didn't have any trouble at all with it. Tracking was still good with the 1.4 extender and though it won't autofocus with the 2X extender, it will in Live View. That's nothing new, though; the older Canon cameras would, too.

Little details like a touch screen are really nice. The CF cards are fast and if they're like my other ScanDisks they'll last forever. Battery life is noticeably better than the Mk II, though that was already great. Sure better than the old 7D2's battery life, though.
Read more