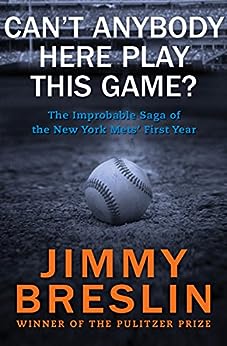 “The book that first put the name Jimmy Breslin in lights.” —New York Daily News
“The Theater of the Absurd has not yet—by a country mile—produced anything like the Mets.” —The New York Times
“A touching, enjoyable, and interesting addition to anybody’s sports reading list.” —Patrick Conway

Jimmy Breslin (1928–2017) was a Pulitzer Prize–winning journalist and one of most prominent columnists in the United States. Born in Queens, New York, Breslin started working in New York City newsrooms in the 1940s. He began as a columnist in 1963, when he won national attention by covering John F. Kennedy’s assassination from the emergency room in the Dallas Hospital and, later, from the point of view of the President’s gravedigger at Arlington Cemetery. He ran for citywide office on a secessionist platform, befriended and was beaten up by mobsters, and received letters from the Son of Sam during the serial killer’s infamous 1977 spree. Known as one of the best-informed journalists in the city, Breslin’s years of insightful reporting won him a Pulitzer in 1986, awarded for “columns which consistently champion ordinary citizens.” Although he stopped writing his weekly column for Newsday in 2004, Breslin continued to write books, having produced nearly two dozen in his lifetime. He passed away in 2017 at the age of eighty-eight.

A vivid history of the Mets, preserving for all time a wonderful look at New York's other team. This excellent read is written by a Pulitzer Prize-winning author. --This text refers to the paperback edition.
Read more

4.5 out of 5 stars
4.5 out of 5
165 global ratings
How are ratings calculated?
To calculate the overall star rating and percentage breakdown by star, we don’t use a simple average. Instead, our system considers things like how recent a review is and if the reviewer bought the item on Amazon. It also analyzes reviews to verify trustworthiness.
Top reviews

Jeff LeVine
4.0 out of 5 stars Humorous look at the 1962 Mets, but written for a 1962/63 audience
Reviewed in the United States on January 10, 2020
Verified Purchase
An entertaining little book, centered around the 1962 New York Mets and their first season in MLB, when they managed to win 40 games and lose 120. Seemingly written in the break between the 62/63 season, possibly as a series of articles then compiled into a book(?), as each chapter seems to be its own piece – the book doesn’t really present a traditional beginning to end look at the season, but just skips around to tell individual stories, usually with a lot of humor, and paints of compelling inside picture of one of the worst teams in modern baseball, why they were so bad, and of the fans who loved and appreciated them. It’s really Breslin’s writing style that holds the book together, and makes it still readable today (what, 58 years later?), when most of the players and events of the book are pretty obscure. Here he writes in good humor, direct, with a bit of an old fashioned NYC bar-room tall-tale feeling. Today, one wishes there was a little more background given to the pieces, as often things are referenced in a way that expects everybody to know what he’s talking about, as it’s really written for that 1962/63 audience, and in 2020 a lot of the context is lost (at least to me, who wasn’t even born until eight years after the book was released).

Of special note is the final chapter, which uses the story of an aging Gil Hodges (then the Mets first baseman), to ramble a bit about the passing of time, the story of the Dodgers and the Giants leaving New York and why it felt so good to get a National League team back in the city, and the way television has changed everything about the world Jimmy Breslin grew up in. Simply a tremendously well written and moving chapter and the best thing in the book.
Read more
One person found this helpful
Helpful
Report abuse

John McKeon
5.0 out of 5 stars Beautiful Losers
Reviewed in the United States on January 18, 2017
Verified Purchase
this is a short book by Jimmy Breslin about the 1962 NY Mets. This was the first year of their existence and they were comically inept as recounted in the pages of this book. They ended up losing 120 games which is a record. The team managed by 73 yr. old Casey Stengel , was made up of players who were castoffs from other teams and veteran players who had seen their better days. The Mets filled a void in New York after the Dodger and Giants had left and this team through their play and colorful characters won many New Yorkers over. Breslin has a talent for relating humorous stories, I particularly liked where he wrote that the Mets were going to give a Birthday cake to their first baseman Marvelous Marv Thornberry but decided against it because they were afraid he 'd drop it. While there are no pictures in this paperback edition, there is an appendix listing the 1962 Mets by position and it is interesting that one of the 1st baseman-Gil Hodges would become the Mets manager leading them to the World Series in 1969 with another member of the '62 team playing 1st base- Ed Kranepool. This is a great story of the Mets first year. As Tug McGraw once said " you gotta believe."
Read more
One person found this helpful
Helpful
Report abuse

Randolph Rossi
5.0 out of 5 stars Only Rowan and Martin were Funnier than the 1962 NY Mets
Reviewed in the United States on October 12, 2019
Verified Purchase
I had been a diehard Yankee Fan in the Early 60’s that started to go to Mets Games when I was 16. I lived in Queens Village and could take the Q27 Bus to Main Street, Flushing and then walk to Shea Stadium. Before reading this book, I had no idea who the heck was Shea. I found out that Bill Shea was a Big-time Corporate Attorney who was asked by Mayor Wagner to get a National League Team in New York to replace the two teams that were stolen from NY & Brooklyn.
The tells about the 1962 Mets Season but much more. It can be best described as a Early 1960’s period piece of New York. Great book that is both informative and funny. I greatly recommend this book for people whether they’re sports fans or not.
Read more
Helpful
Report abuse

The Godfather
5.0 out of 5 stars Meet the Mets.
Reviewed in the United States on February 25, 2018
Verified Purchase
The Mets. It's a franchise that has frustrated and delighted fans for decades. From the early days of record losses to amazing series wins and back again. It's a rollercoaster ride. This book focuses on the beginning, the 40 wins and 120 losses days. A retrospective for Mets fans that could elicit smiles or a reminder of those miserable days. It was a rough start with some colorful characters but the Mets gathered a loyal and patient fan base. Part of the reason for that might be the Brooklyn Dodgers fans who experienced disappointment and elation for many years and who were starved for a National League team to call their own. It's a quick read and well wotrth the time.
Read more
3 people found this helpful
Helpful
Report abuse

BuilderBob
5.0 out of 5 stars A Divine Intervention.
Reviewed in the United States on April 7, 2020
Verified Purchase
When the Brooklyn Dodgers left in 1957 there was no more National League Baseball in New York. One was limited to watching the Yankees, not a popular option for Giant or Dodger fans. It sucked. The Mets were sent from Heaven above as saviors. This is a great read on how they came to be by a writer who lived it. It brought back my bitterness as a 12 year old on losing my heroes and the happiness of the Mets creation. They brought the National League back with all their heroes. The Duke and Gil came home.
Read more
Helpful
Report abuse
See all reviews

know naym
5.0 out of 5 stars So good, it’s a shame 😢to finish this book!!
Reviewed in the United Kingdom on February 12, 2020
Verified Purchase
A great read, you don’t have to like baseball to enjoy this book, great writer, great read!
Read more
Report abuse

maryoh
5.0 out of 5 stars Fantastic AND Funny read!
Reviewed in Canada on September 19, 2017
Verified Purchase
This was for my husband and it loves it! He reads some of the funny quotes aloud to me. He even said he doesn't want to finish the book because he doesn't want it to come to an end! Great find!
Read more
Report abuse