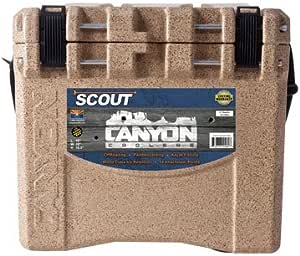 Visit the CANYON COOLERS Store
4.9 out of 5 stars 25 ratings

Rafters, angles, and boating enthusiasts: Get on-board with the new gold standard in ice retention. Mud, blood and beer is just another day to the Canyon Cooler Adventure Series. Tougher than any boot leather, stubborn, shameless and indomitable, the Adventure Series encapsulates the spirit of a pioneer operating at the edges of where the unknown meets the truly wild. We designed and built our Canyon Cooler Adventure Series as a labor of love and a stand up salute to those who explore and seek such places on their own terms. With an average of 2.7 inch thick insulation on all six walls, ice retention is better than any cooler on the market. Built in tie-down points, No-Lose drain plugs, and brutally tested rotomolded, food-grade, UV resistant, kayak plastic construction guarantees a cooler that will put up a fight. Newly designed cam latches, innovative bungee net system, and a high clearance wheeled cooler are just a few of the features you’ll see on the Adventure Series Canyon Coolers. With sizes ranging from 103 quarts to 20 quarts, there’s an Adventure cooler that will fit your need. Pair a basket, or four, with a Canyon Tie-Down Kit, and a Canyon Hasp Lock for the toughest, most secure cooler ever. Our outstanding and unheard of Lifetime Warranty protects your investment for life, your Canyon Cooler will be the last cooler you’ll ever need.

4.9 out of 5 stars
4.9 out of 5
25 global ratings
How are ratings calculated?
To calculate the overall star rating and percentage breakdown by star, we don’t use a simple average. Instead, our system considers things like how recent a review is and if the reviewer bought the item on Amazon. It also analyzes reviews to verify trustworthiness.

michael b
4.0 out of 5 stars Ice for 1.5 days inside 74 degree house
Reviewed in the United States on September 20, 2018
Verified Purchase
I like the design. Love the built in bungee top, although it does get in the way of one hand closing of the latch. The drain plug drains without having to be completely removed, which is nice. The carry strap is comfortable, but the cooler is still heavy resting against your body. I tried it out at home before the first trip. I put 5 bottles of beer(which were cold), i had to have one while doing this test, along with 2 frozen 16oz water bottles and a 10lb bag of ice which filled the cooler about 2/3. I put it in the shower, in case the drain plug leaked (it did not), the house was at 74 degrees. This was done about 5pm, about 9am of the 2nd day after, so about 40hrs. The cooler (which was never opened) was mostly water with some ice left, but not enough to make a solid layer on top of the water. I always put frozen bottles in my coolers to keep the ice lasting longer. I would have thought with the frozen water bottles and being in the house, that I would have easily gotten 48 hours with only half the ice melted. So when I went camping I filled it up to the top with ice, inside had 12 cans of beer, couple gatorades and 3 frozen water bottles. It was 93 degrees in the shade out in the everglades. The cooler ice lasted friday night thru sunday late afternoon, I kept replacing beer and gatorade( from the big cooler), but no ice replacement and it was good. So just make sure your fill the cooler up to the top so minimal air is left inside. The picture is to show you why I bought this cooler. However the cooler in the photo is an Ozark, from Walmart that I returned because it would not even last one day. This cooler is small and light enough (although full it is pretty heavy) to go up top with me so I don't have to keep going up and down for drinks and snacks. The big cooler, where most of the drinks and food are, was in the truck.
Read more

J. P.
5.0 out of 5 stars Really good cooler, large and heavy for it’s capacity though.
Reviewed in the United States on September 9, 2019
Verified Purchase
This is a really good small cooler. Surprisingly good ice retention, I easily got 3-plus days out of it on my trip this summer. Two negatives, it’s large for it’s capacity (should have maybe gotten the Outfitter series) and it’s heavy. The net on the lid and the tie-down spots are handy
Read more
Helpful
Report abuse

4stroker
5.0 out of 5 stars The best cooler I’ve ever owned
Reviewed in the United States on August 28, 2018
Verified Purchase
So far this thing is great. I do wish it had a handle. I tested numerous coolers before keeping this one. It’s a winner.
Read more
4 people found this helpful
Helpful
Report abuse

Richard Cairncross
5.0 out of 5 stars Works great for me
Reviewed in the United States on September 2, 2019
Verified Purchase
I was looking for a lower cost alternative to a yeti cooler. After doing as much research as I could online I finally chose the scout. It’s size works well for me and after pre-cooling and with cooler shock packets it kept the contents between 31-45F for 30 hours. I am very happy with the results. This was a good choice.
Read more
Helpful
Report abuse

Chance
5.0 out of 5 stars Awesome cooler.
Reviewed in the United States on June 19, 2018
Verified Purchase
Awesome cooler... use mine for a lunch box and leave it sitting in the sun most of the day because I work outside. Still have ice three days after filling it up
Read more
4 people found this helpful
Helpful
Report abuse

Amazon Customer
5.0 out of 5 stars Perfect
Reviewed in the United States on July 23, 2020
Verified Purchase
Love this cooler had time to really test it out as long as you precook it work awesome. I had camped and went off-roading in Sedona summer heat with the cooler in the back of the truck and had ice cold beverages all day. It’s handled road trips from sandy beaches to AZ heat with ice lasting for quite some time after we got back. Perfect for drinks inside the car or just having a picnic.
Read more
Helpful
Report abuse

Aliihan
5.0 out of 5 stars Keeps ice all day.
Reviewed in the United States on August 29, 2018
Verified Purchase
Amazing cooler. Much larger than a lunch cooler though. Lots of insulation, not too much space. It keeps ice fine all day in the summer sun though. What more could you ask for?
Read more
One person found this helpful
Helpful
Report abuse

Herbert Cheese
5.0 out of 5 stars Great cooler
Reviewed in the United States on August 7, 2020
Verified Purchase
Used in the Arizona and New Mexico deserts and has held up well so far strapped into the back of a truck and riding around in a boat. Has no problem keeping ice for day or two in reasonable temps.
Read more
Helpful
Report abuse
See all reviews