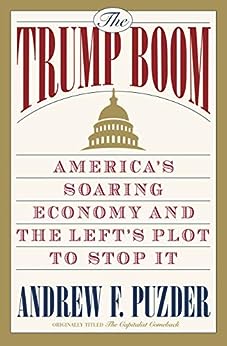 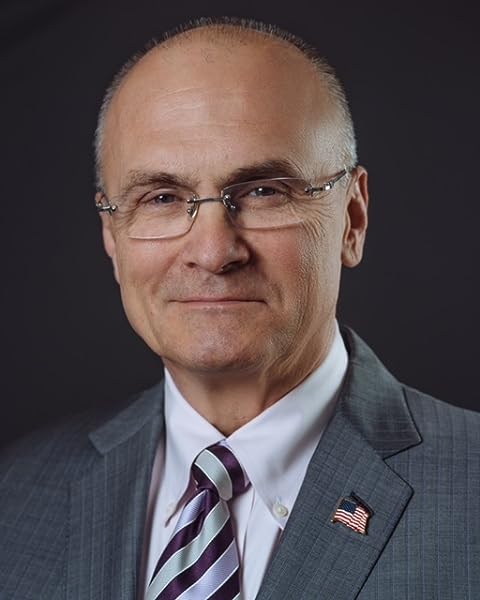 The Capitalist Comeback: The Trump Boom and the Left's Plot to Stop It Kindle Edition

ANDREW PUZDER is the former chief executive of CKE Restaurants, where he helped turn Hardee's and Carl's Jr. into the fast food powerhouses that they are today. Starting as the owner's personal attorney in 1991, Puzder helped pull the company out of serious financial difficulties. Under his leadership, CKE has expanded to 3,700 restaurants globally. --This text refers to an out of print or unavailable edition of this title.

"The Capitalist Comeback gives a vociferous and much-needed moral, philosophical, and economic defense of capitalism, which is under siege by a variety of left-wing interest groups. While the Trump Administration has rolled back some of the overregulation and overtaxation that prevents ordinary people from becoming extraordinary, only widespread recognition of capitalism's role in creating opportunity for everyone-especially those who need it most-will ensure America's continued success in the 21st century and beyond. Given his decades of leadership in the private sector and being on the receiving end of an ugly, coordinated left-wing attack, Andy Puzder understands this fight better than anyone and is the perfect messenger to deliver this vital message."―Bernie Marcus, co-founder of Home Depot

"Before he was one of America's most successful restaurant CEOs, Andy Puzder earned an hourly wage working his way through school while raising a family. This makes his insights all the more important. Free market capitalism benefits everyone-worker and owner alike. The Capitalist Comeback is a much-needed antidote to the socialism of the Bernie Sanders-Elizabeth Warren Left."―Newt Gingrich, former Speaker of the House

"I've known Andy Puzder for decades, and he is a man who's talked the talk AND walked the walk. This book is a robust endorsement of capitalism written by the consummate capitalist, and it holds the key to understanding how to make the most of the Trump moment."―Arthur B. Laffer, Ph.D.

"Hooray! Capitalism and free markets are making a big comeback in America under Donald Trump. Andy Puzder, a chief advisor to Trump during the campaign, explains how and why it's working. Finally, a book about America with a happy ending."―Stephen Moore, senior economic advisor to the Trump campaign and Heritage Foundation economist.

"Puzder is exactly the kind of businessman politicians should listen to but don't. We ignore him at our economic peril."―The Federalist

"A sweeping historical view of capitalism - and of the opposition to it, ranging from the left's "war on profit" following the Gilded Age and the rise of labor unions to modern progressives' vilification of business and their rejection of the views of moderate Democratic Party leaders such a John F. Kennedy and Bill Clinton."―Ed Conard, RealClearPolitics

"In the introduction to his book, Puzder says that one of his primary goals in writing it was to create a "'Most Wanted' list of the institutions standing in the way of freedom and prosperity" in America so that those who value capitalism and free enterprise can better understand the forces that are fighting to obstruct Trump's economic agenda. And in that respect, The Capitalist Comeback succeeds pretty brilliantly."―Townhall.com

"Such a fantastic book. Everybody should be reading it."―Trish Regan, Fox Business --This text refers to an out of print or unavailable edition of this title.

4.7 out of 5 stars
4.7 out of 5
117 global ratings
How are ratings calculated?
To calculate the overall star rating and percentage breakdown by star, we don’t use a simple average. Instead, our system considers things like how recent a review is and if the reviewer bought the item on Amazon. It also analyzes reviews to verify trustworthiness.

J. A. Grossman
5.0 out of 5 stars Tough yet fair, with revealing insights from business and politics
Reviewed in the United States on December 9, 2018
Verified Purchase
In this well-written, hard-charging book, Andy Puzder sets the record straight - not just on what went down behind the scenes during his nomination for Secretary of Labor, but on how to create economic growth, jobs, and a rising tide to lift all boats. One of the better chapters devotes considerable attention to John F. Kennedy's supply-side revolution, quoting JFK's powerful argument for cutting taxes: "Every dollar released from taxation that is spent or invested will help create a new job and a new salary. And these new jobs and new salaries can create other jobs and other salaries and more customers and more growth for an expanding American economy." Puzder pushes back against the vilification of job-creators in America, both in politics and the media, bringing his considerable experience in the private sector to bear in defending a rollback of regulations and government intrusion to release greater American economic growth. In his chapter, America: Land of the Self-Made, Puzder writes: "Self-interest, or motivation to improve your life, is the primary and most effective means for generating economic activity." He argues that America's free-market capitalism, rule of law, and respect for individual rights, are the roots of its prosperity and dynamism -- and in this compelling book Puzder urges each of us to honor and protect those foundations. Nicely done!
Read more
21 people found this helpful
Helpful
Report abuse

Avid Reader
5.0 out of 5 stars Powerful indictment of socialism
Reviewed in the United States on July 9, 2019
Verified Purchase
Andy Puzder brilliantly makes the case for liberty, especially economic freedom (aka capitalism). This book should be required reading for all economics majors. I am going to buy this book for young adult friends in hopes of reversing some of their public school brainwashing. I am furious at the Senate RINO’s who would not stand by this exceptional Cabinet nominee (given his ex-wife recanted her slander and supported his nomination). Thank you, Mr. Puzder, for this exceptional book!
Read more
5 people found this helpful
Helpful
Report abuse

Jason A. Thompson
5.0 out of 5 stars A big fan of this book...
Reviewed in the United States on October 15, 2018
Verified Purchase
Andy nails it with his book. A riotous celebration of Capitalism. Kudos for having the courage to fight for what you believe and what is best for our nation.
Read more
10 people found this helpful
Helpful
Report abuse

Ce Thomas Cleveland
5.0 out of 5 stars Act quickly and read this book to prevent the Democratic Socialists from destroying our country.
Reviewed in the United States on April 28, 2019
Verified Purchase
A refreshing, truthful analysis of the lies that the Democratic Socialists are spreading. Well presented, researched and documented as shown by numerous footnotes. One can only imagine even how much greater our country could be if Andy Puzder was our Secretary of Labor.
Read more
6 people found this helpful
Helpful
Report abuse

F. Stephen Masek
5.0 out of 5 stars Enyoy this fine book or cheat yourself
Reviewed in the United States on May 20, 2018
Verified Purchase
This excellent book should be required reading in all of our high schools. It is well-written and contains useful facts and information. Not reading this book is cheating yourself. Over and over throughout history, capitalism has been proven to be the system which makes things best for humans, while all of the various forms of collectivism (communism, socialism, fascism) have proven to be failures, making things worse for most everyone. Even so, we are afflicted with evil people driven by the devil in many media, university, and government school positions pushing collectivism. We can and should put collectivism in the sewer of history, along with absolute monarchies, landed gentry, serfdom, and slavery.
Read more
11 people found this helpful
Helpful
Report abuse

Andy Anderson
5.0 out of 5 stars Speaks the truth about Socialism vs Capitalism!
Reviewed in the United States on December 21, 2019
Verified Purchase
Really enjoyed reading this prospectus of how our president is making inroads into economic sanity in the midst of a desperate Left aiming to kill 243 years of American ingenuity and common sense.
Read more
One person found this helpful
Helpful
Report abuse

M. Gold
5.0 out of 5 stars excellent book on capitalism
Reviewed in the United States on August 7, 2019
Verified Purchase
Why capitalism is the best economic system for raising the world's standard of living.
If you have socialist leaning friends, this will allow them to see the light, provided they can or want to read.
Read more
Helpful
Report abuse
See all reviews

Ephy Chesler
5.0 out of 5 stars Five Stars
Reviewed in the United Kingdom on May 20, 2018
Verified Purchase
An excellent read. Should be mandatory for all reality-blind Democrats!! It's common sense and logical!
Read more
Report abuse

ceb
5.0 out of 5 stars A must read
Reviewed in Canada on October 30, 2019
Verified Purchase
Full of information. Eye opener.
Read more
Report abuse
See all reviews
Back to top
Get to Know Us
Make Money with Us
Amazon Payment Products
Let Us Help You
EnglishChoose a language for shopping. United StatesChoose a country/region for shopping.
© 1996-2021, Amazon.com, Inc. or its affiliates