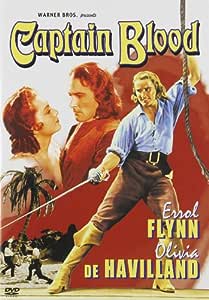 Share
STREAM ANYTIME with Prime Video from $6.99
Have one to sell?
Sell on Amazon

Errol Flynn and Olivia de Havilland star in this swashbuckling classic. After he treats wounded English rebels, physician Peter Blood (Flynn) is arrested and sentenced to slavery in Jamaica. There, he catches the eye of the governor's daughter, Arabella (de Havilland), who buys him. But Blood leads fellow slaves in an escape and strikes terror into the Jamaicans as the pirate Captain Blood--until the Spanish attack, and Blood saves Arabella and Jamaica from England's enemies.

4.7 out of 5 stars
4.7 out of 5
674 global ratings
How are ratings calculated?
To calculate the overall star rating and percentage breakdown by star, we don’t use a simple average. Instead, our system considers things like how recent a review is and if the reviewer bought the item on Amazon. It also analyzes reviews to verify trustworthiness.
Top reviews

Louise Glass
5.0 out of 5 stars Errol Flynn is Captan Peter Blood-Highest Recommendation!
Reviewed in the United States on July 9, 2017
Verified Purchase
One of the cinema's greatest pairings was of Errol Flynn with Olivia de Havilland. Captain Blood was the first of eight movies the charismatic pair made together. Considering this film was made in 1935 it has stood the test of time.
Note: the scene with Captain Bloods ship fighting the French ships was very realistic. It was early swashbuckling and cinematography at its best.
NO other actor could have played physician turned swashbuckling pirate Peter Blood, but Errol Flynn. He was made for the role.
Flynn was 26 and Miss De Havilland was a luminously beautiful nineteen years old.
The chemistry between the two is tangible and it makes the emotional scenes between them all the better.
The character actors who were in quite a few a Errol Flynn's movies were outstanding.
That old saying "they don't make them like that anymore" is sadly so true.
After viewing this as a child and now watching it all these years later was a real treat.
I advice all the lovers of the golden age of film to watch Captain Blood. It's a rare treat.
Read more
18 people found this helpful
Helpful
Comment Report abuse

Blackcloud26
5.0 out of 5 stars Great Movie making!
Reviewed in the United States on July 30, 2020
Verified Purchase
This is the second of my four favorite Flynn films. The Adventures of Robin Hood, Captain Blood, Dodge City and Santa Fe Trail. I like all of his early work but these four stand out. It does'nt hurt that the lovely Olivia is in each. These are just magnificent examples of Hollywood at its best. Don't think about the scandals, the rumors and all the media garbage later in his life. Its a great film just for itself. Flynn was spectacular.
Read more
2 people found this helpful
Helpful
Comment Report abuse

Eirik J. Iverson
5.0 out of 5 stars HD Worth the extra Dollar?
Reviewed in the United States on June 14, 2015
Verified Purchase
I do not have the answer. I do not care to buy the SD version to compare. I'm writing this review out of disappointment with the many analog/film visual artifacts (scratches, blemishes, etc) that today's digital tools can eradicate with multiple, different methods. I expected WB to have done this on a classic film they've been milking for 80 years. I started to wonder if copyright laws had been allowed to expire as intended that a fan such as myself, many of us maybe, might have cleaned these imperfections out. Hell, we could also replace those pitiful studio landscape/seascape backdrops.

Captain Blood is comfort food to me.

I'm not looking to colorize it, though I'm not opposed to it. But if WB is to continue to profit decades after the original copyright was intended to expire. I expect them to earn it by at least cleaning out the slightly distracting film blemishes. I'm now disinclined to buy any more classic HD content. Instead, I'll look to upscaled DVDs at a fraction the cost. Perhaps Amazon might flex its muscle to tag classics as digitally cleaned vs. digitally captured (raw).
Read more
10 people found this helpful
Helpful
Comment Report abuse

Donna Sumler
5.0 out of 5 stars Swashbuckling classic pirate movie
Reviewed in the United States on October 14, 2020
Verified Purchase
As a victim of the English monarchy of King James, Captain Blood -- alias of Dr. Blood -- gets shipped off -- in chains as slaves -- to a Caribbean island governed by England. Errol Flynn takes advantage of life opportunities as he meets them: from treating the island governor to capturing an attacking Spanish ship and then sinking all the other Spanish ships. The older movies always include a beautiful woman , Olivia de Haviland, for the hero to save as well as comic relief episodes. The ending of this black-and-white action packed film has the traditional love story but ends on a very humorous note.
Read more
Helpful
Comment Report abuse

Walton P. Sellers III
5.0 out of 5 stars All Right, My Hearties--Follow Me!
Reviewed in the United States on August 21, 2013
Verified Purchase
And that's just what we do, too--follow Errol Flynn as he embarks upon the signature role of his swashbuckling career. This was Errol Flynn's first major film, and it set the standard for pirate epics for over 20 years. Even Flynn himself did not surpass this performance in like films over the years that followed. We see the passion that the young Flynn brings to the screen as an idealistic doctor, a rebellious slave, and finally, as an able, cunning, and caring pirate.

The only criticism of the DVD that I have is that such a film should have been colorized during the re-mastering process. I know that the impact of black-and-white can also be visually stunning as well as representative of a ground-breaking era of film, but the costumes and action scenes cry for color to be fully appreciated. Flynn's voice seemed to be slightly muted in the early scenes, too.

Other than that, the film is a rollicking good time--filled with action and witty dialogue delivered by consummate professionals. Lionel Atwill and Basil Rathbone are villains par excellence--one knows that Rathbone and Flynn will eventually cross swords, but just where and when is a surprise. The onscreen chemistry between Errol Flynn and Olivia De Havilland cannot be denied; it is as magnetic as the onscreen relationship between John Wayne and Maureen O' Hara. Supporting actors such as Henry Stephenson and Flora Robson round out this magnificent film soufflé and help to make it the true classic that it is. Buy this together with The Adventures of Robin Hood (1938), and you will truly have Errol Flynn at his best.
Read more
6 people found this helpful
Helpful
Comment Report abuse

Paul Dopp
5.0 out of 5 stars Slavery is color blind.
Reviewed in the United States on September 25, 2020
Verified Purchase
This film should be required viewing in every elementary or middle school. In the midst of the action and a significant amount of humor, there is an excellent portrayal of the great issues facing mankind in every era. Slavery, betrayal, desperation leading to lawlessness, unrighteous government and righteous rebellion, personal integrity and sacrifice are all portrayed. But most importantly for this time the oppression of the British king putting thousands of his subjects into inescapable slavery and shipping them to the Indies to work in the sugar plantations. Every US citizen needs to be reminded that slavery knows no race. I would also recommend the movie, the unconquered by Cecil b DeMille starring Gary Cooper. That film also deals with destitute white British citizens being forced into slavery and shipped to the colonies.
Read more
Helpful
Comment Report abuse

Paul Palumbo
5.0 out of 5 stars Great movie
Reviewed in the United States on July 2, 2020
Verified Purchase
Captain Blood was always a great pirate film and now shown on DVD enhances the film from VHS. Errol Flynn in his younger days was a dashing film star and he really shows his acting ability in his stunts during the movie. A great movie to watch.
Read more
One person found this helpful
Helpful
Comment Report abuse
See all reviews

Dr Bee
5.0 out of 5 stars I'm going to enjoy this again and again
Reviewed in the United Kingdom on July 9, 2017
Verified Purchase
This film was on the TV many times when I was a child in the 1960s and I have fond memories of watching it. I'm not sure if this was Flynn's first big role but when I watch it now he doesn't quite ooze the effortless charm for which he became so famous, nor is his mild Australian accent entirely disguised as it later was. These observations notwithstanding, this is solid gold entertainment from the age of the great swashbuckler movies and if you enjoy films of that genre then you will enjoy Captain Blood - and if you're like me you're going to enjoy it again and again.
Read more
Report abuse

Dakk
5.0 out of 5 stars What a treat!
Reviewed in the United Kingdom on May 22, 2017
Verified Purchase
What a treat to be able to see this movie again from so long ago. With Errol, Olivia and Basil Rathbone who later came together again in the Robin Hood movie playing the roles we have come to know them by. I'm well pleased with this purchase and would recommend this DVD.
Read more
2 people found this helpful
Report abuse

A. Hickman
2.0 out of 5 stars Two Stars
Reviewed in the United Kingdom on June 12, 2018
Verified Purchase
THE DISC IS IN BLACK AND WHITE BOX COVER SHOWS IT COLOURED
Read more
Report abuse

Amazon Customer
4.0 out of 5 stars Again magical moments between Flynn and Olivia de Havilland.
Reviewed in the United Kingdom on August 29, 2017
Verified Purchase
Great film I enjoyed every minute, it is really worth watching
Read more
Report abuse
See all reviews
Pages with related products. See and discover other items: johnny test, all movies on dvd, pirate movies, Captain Fans