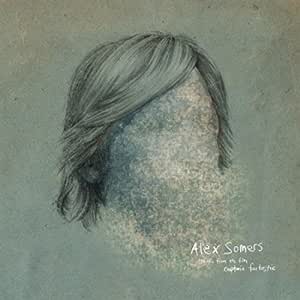 Limited double colored heavyweight vinyl LP pressing housed in a handmade bespoke gatefold sleeve with rounded edges. Includes digital download. Invada Records are proud to announce Alex Somers' (Jónsi and Alex/Sigur Rós) original score to Matt Ross' film Captain Fantastic, starring Viggo Mortensen (The Lord Of The Rings). The soundtrack also features contributions from Jónsi (Sigur Rós). The film has debuted to rave reviews at the Sundance Film Festival this year, with The Guardian calling it "heartfelt, comedic and gorgeous". Appropriately, the soundtrack beautifully mirrors the story's strange, otherworldly settings with Somers creating a score that is at once delicate yet haunting, fragile and moving to conjure up a gorgeously ethereal atmosphere. The soundtrack will appeal to fans of Sigur Rós.

Sigurros
5.0 out of 5 stars Another beautiful album from Alex (and Jonsi)
Reviewed in the United States on July 17, 2016
Verified Purchase
Beautiful soundtrack! Not a bad song on the entire album. It is definitely best to listen to the album as a whole, as it sounds like it was intended to be listened to it that way. It is very reminiscent of Riceboy Sleeps, Jonsi's "We Bought a Zoo" album (with a slower tempo), and Sigur Ros' new song that they just released. As always, Jonsi being included in singing in some of the songs takes it to a whole different level. Alex and Jonsi are so talented and collaborate so well together! I highly recommend this album!
Read more
One person found this helpful
Helpful
Comment Report abuse

Amazon Customer
5.0 out of 5 stars Beautifully moving & heart-wrenching
Reviewed in the United States on March 16, 2017
Verified Purchase
I have been a fan of Alex Somer's music and artwork since I discovered Riceboy Sleeps. The soundtrack he has composed for Captain Fantastic is beautifully heavy and the listening experience is moving and at times heart-wrenching. I've used this album for meditation before and it has comforted me as I've mourned the loss of a loved one. Please support this incredible musician and his work.
Read more
One person found this helpful
Helpful
Comment Report abuse

Clyde Zuber
5.0 out of 5 stars Film Music
Reviewed in the United States on June 1, 2018
I don't know about the film, but I like Alex Somers' music.
Read more
Helpful
Comment Report abuse
See all reviews