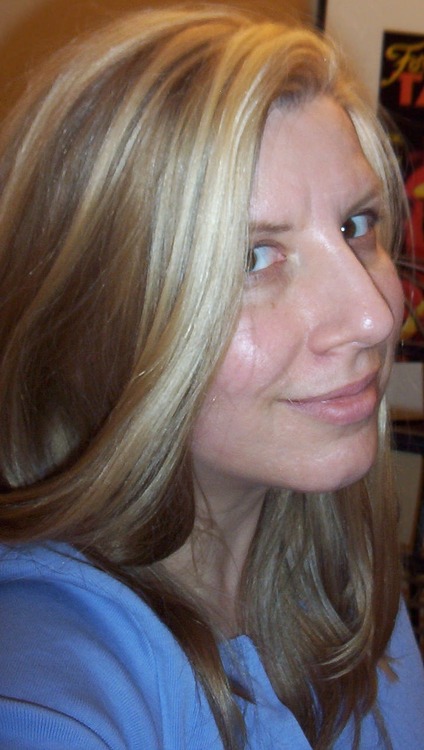 Carrie Green "a powerful new voice in horror and suspense" will have her first novel, 'Walk a Lonely Street,' published by McMullin Press soon. Set in Chicago, a jazz nightclub owner is found dead in the parking lot with a bullet to the brain. Police have written it off as a suicide, but his wife and best buddy think that it's a murder and they embark on their own investigation. Carrie is excited to build her audience, in the meantime, with the 'Roses are Red,' 'Violets are Blue,' and 'Sugar is Sweet,' trilogy of short stories and a novella being released as eBooks for a limited time. Born and raised in Chicago, Carrie now lives with her husband in the northern suburbs of the city. Contact Carrie or sign up to receive notification of the publication of her next book at www.CarrieGreenBooks.com. 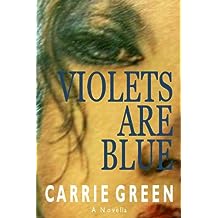 Newly-wed Sarah is delighted to move in with her mother-in-law, Martha, a widower who had raised her son, by herself, on an isolated Midwest farm.

A kid from a broken home who had been raised in a group house in Chicago, Sarah had struggled to put herself through college on scholarships.

She considered herself self-reliant and willing to work hard for her dreams. She wants only one thing in life—a real family.

Todd was the love of her life, so that she was sure that she'd love Martha, too.

It never occurred to Sarah that Martha would see her as competition, to be eliminated.

Sarah stood on the dirt road, staring at the six foot high stalks, at the long, rippled leaves that concealed, in seconds, the bold red of Todd's t-shirt. The corn had swallowed him up. She hadn't expected him to take off.

Seriously, he wanted to play tag in a corn field? Then, she thought, why not? It was as crazy as anything else that they had done together. She remembered the time that they had walked through a snow storm, licking ice cream cones. People drove by, laughing at them, but a cone in winter had the advantage of not melting. It was the perfect weather for ice cream.

"Todd, where are you?" She tried to sound pissed, after all, he was forcing her to play tag. She waited to hear his voice, so that she could follow him. "Todd?"

"Come and get me!" he shouted, but she heard him moving again as she ran into the field, the noise of him running was fainter than the crashing of her own elbows and legs through the corn stalks. In the corner of her eye she saw the ears of corn which were both uglier and smaller than those in the supermarkets back home. The cobs, half eaten by the birds, had empty black sockets that resembled gap-toothed smiles. Tassels draped over the cobs like a bad comb-over.

The leaves sliced her skin. She was forced to run through random swarming circles of flies. Her hands were held out straight in front of her, in a futile effort to protect her face. Sarah could hear Todd, up-ahead. He sounded closer.

She stumbled. Her feet kept getting caught in the rope-like webbing of the corn roots. The ground was rock hard and dry. Only her momentum kept her from actually falling. A glimpse, finally, of Todd's shirt; she was gaining on him.

His dark blue baseball cap flew up above the corn. Her eyes followed its descent. Sarah almost went to pick it up, but she didn't want to lose Todd now. It was his problem, if they couldn't find the hat later...

Grinning, she gasped for more air, she was getting closer. Todd was too smug in his country boy superiority, condescending about her fear of chickens. They were big birds, peaking at her knees, chasing her around the pen. They had flapped their useless wings in what she figured was their attack pose and made their warning cries, high and screechy. Fried chicken. Roasted chicken. Sweet and sour chicken. Her revenge would be tasty.

Todd was no longer a blur, but begun to take shape, again. She could see, in clear detail, the dark wave of hair at the top of his neck, formed by his constant habit of wearing baseball caps.

She was getting closer. Growing up in Chicago didn't mean that she couldn't run. There had been plenty of things to run from in Chicago. She liked to think that four years in college hadn't slowed her down.

She could see Todd turn his head to check on her progress. He started quarterback dodging, going left and then right, around the rows of corn. Sarah followed, replicating his sudden turns. She steadied herself by reaching out at the corn, ripping off leaves, knocking down stalks.
Read more 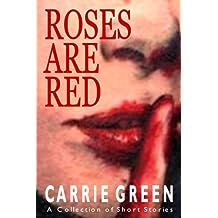 "If O. Henry had been a #horror writer…" Christopher Zisi, Author of 'Escaping From the Institue'

"It’s in-your-face horror. Her bad guys are the most disgusting, evil, and terrifying characters that you’ll ever NOT want to meet." Keith Weaver, FearDex.com

"Think of the phrase 'roses are red.' Chances are that trite declarations and gestures of love come to mind. Carrie Green's short story collection, however, is far from romantic trifle as you can get. These three stories explore the darker side of mankind, with selfishness and deception among Green's main themes." HorrorNews.Net

"Green shows that she has an appreciation and understanding of a variety of horror types. More importantly, she proves that she is capable of delivering scares in each of them." Nicholas Strange, StrangeAmusements.com

"A good short story leaves a great deal unsaid, but next to nothing unspoken. Carrie Green's short story collection does that well, very well, and remarkably well. I say this because I quite enjoyed the book." W.J. Rosser, RossersRegularReads.Blogspot.com

ROSES ARE RED, A Collection of Short Stories

A LONG DISTANCE RELATIONSHIP—Drunk, Allan ended an all-nighter of partying with a hit and run that escalates into First Degree murder.

A LUCKY HUMAN—Traveling the Universe aboard a space cruise ship may be the hottest trend, but a young man may be exchanging his life for this privilege. 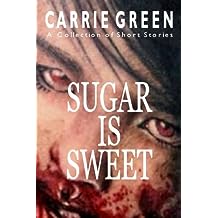 PLAYING FOR KEEPS—Sometimes a mother/daughter bond can be so close that it kills.

LOVED—Being loved is sometimes a fairy tale, sometimes, a nightmare. It all depends on who falls in love with you.

CHRISTMAS IN STRIPES—An ex-con spends his first holiday back home with his family and realizes that you can never go home again.

Dawn hid her head beneath her blankets. Her parents were fighting again. She clenched her pillow and her Disney Princess comforter against her ears. She wanted to get up and go to the washroom, right down the hallway, in the middle between her bedroom and her parents, but she was scared. When Mommy and Daddy started fighting, her showing up would mean even more yelling. Suddenly her name would enter the arguments. What are you doing up, Dawn? A hand would slice through the air and land on her cheek, or her head, or she’d be grabbed, turned around and paddled hard on the behind.

Her bed was too hot. She punched a hole out by the top of her head, letting some fresh air in. She wished that they’d stop fighting. Dawn crossed her legs, hugging her knees to her chest. She had to go to the bathroom bad. She was a big girl and big girls didn’t pee their beds.

There were footsteps and then the sound of the front door being unlocked and slammed shut. Dawn stuck her head from out of her blankets. She angled her head towards the rooms beyond her closed bedroom door, listening. She spotted her Teddy Bear on the floor, but she made no movement to pick him up. She must have knocked him off of the bed. He sat on her pillow every morning and she usually cradled him in her arms until she fell asleep.

Dawn lay perfectly still on her bed. She kept her breath steady as if she was sleeping. She knew when she moved that her mattress would squeak and alert whoever was still home that she was awake.

The floorboards creaked in the hallway outside her door. They never made noise when Dawn walked down the hall. She had tested each board and she carefully avoided the ones that had movement and scraped against each other. The footsteps were heavy. It was Daddy. His loose bedroom slippers made a distinct dragging noise on the wood floor. It must have been Mommy who left the apartment.

Flinging off her blankets, she ripped open her bedroom door and barreled down the two feet into the hall, right into the bathroom. Her Dad was caught by surprise, too late he tried to lunge for the bathroom doorway before her, but she was small and quick and beat him easily, shutting the door in his face.

“I got it first! Ha! Ha!” she trilled out in glee, twisting the lock.

She pee-pee’d. It was such a relief. She had felt like her tummy was going to burst. She peed for such a long time that it sounded like she was running water in the sink. Finished, she flushed the toilet.

Now there was no rush. She sat down against the bathtub. The porcelain was smooth and hard against her back. Beneath her the black and white hexagon tiles formed in infinite patterns. In her imagination she saw daisies, stick figures, and lop-sided rectangles.

“Hurry up.” Her Dad pounded on the door.

Dawn took her time. She ignored her father. She climbed onto the ledge of the bathtub and balanced so that she could see almost her whole body in the mirror above the sink. She lifted her nightgown to look at her round tummy and her belly button. She dropped her nightgown. Dawn squinted her eyes at her reflection. She made a kissy face. She was very ordinary looking. Black hair, cut short with bangs. Boring brown eyes.
Read more