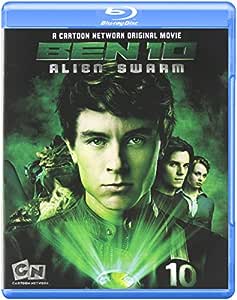 THE ALIEN SWARM IS UPON US! Our world is threatened with an imminent invasion from a swarming alien menace. And there is only one hero brave enough, smart enough and tough enough to fight back - Ben Tennyson! But when Ben teams up with an outsider, he breaks rank with Gwen, Kevin and Max and risks losing against the toughest enemy he has ever faced. The stakes are high and the action is intense as Ben fights to protect our planet from the Alien Swarm!

4.6 out of 5 stars
4.6 out of 5
137 global ratings
How are ratings calculated?
To calculate the overall star rating and percentage breakdown by star, we don’t use a simple average. Instead, our system considers things like how recent a review is and if the reviewer bought the item on Amazon. It also analyzes reviews to verify trustworthiness.
Top reviews

Erika
5.0 out of 5 stars My son loved the movie
Reviewed in the United States on March 13, 2019
Verified Purchase
Personally, I wasn’t really interested, but it wasn’t bad. However, my son (5 yrs old), sat and watched the whole movie and loved it. It played a lot of background music throughout the movie, in my opinion. If your kid is a Ben 10 fan, then I’d buy this movie.. they’ll like it.
Read more
Helpful
Comment Report abuse

Michael A. Haase
5.0 out of 5 stars Great, entertaining movie
Reviewed in the United States on December 12, 2009
Verified Purchase
I saw a preview for this film on a Cinemark Theatre monitor in their lobby and was intrigued enough to buy it. I had never seen the cartoon on the Cartoon Network, but this movie was well worth the price and was very entertaining.

The actor who played Kevin Levin, Nathan Keyes, really stole the show, in my opinion. He is a very confident actor and seeing him behind the wheel of a sports car not only seemed believable but looked natural for him. Kevin's character is kind of like the high school jock, without the compulsion to be a bully, and with a sharp mind to go along with it. Ryan Kelley, who played Ben, was quite good as well, and certainly added to the movie. But Keyes was extremely well cast and for me portrayed the most memorable character, and was very likeable despite his bad boy persona. I suspect that Keyes has a successful acting career ahead of him.

All in all this was a cool little film. Although targeted toward the teen set, I'm above that age group and enjoyed it quite a bit. Should the Cartoon Network decide to make a sequel, I'll buy that too, so long as Kelley and especially Keyes are brought back.
Read more
8 people found this helpful
Helpful
Comment Report abuse

S. Moss
5.0 out of 5 stars good movie
Reviewed in the United States on January 24, 2010
Verified Purchase
My seven year old son loves the cartoon version. This movie was actually pretty well done and he watched it several times in one weekend. Some of the acting lacked somewhat and I did not like the casting for "grandpa". With a bigger budget it could have rivaled movies like Spiderman and Transformers. In all it turned out pretty good for being based on a cartoon. Any Ben 10 fan will most likely like this movie.
Read more
3 people found this helpful
Helpful
Comment Report abuse

RIrish
5.0 out of 5 stars Fun and Cool
Reviewed in the United States on January 15, 2018
Verified Purchase
Good, like the cartoons. My son thinks it's great.
Read more
Helpful
Comment Report abuse

Ryan L. Kamack
4.0 out of 5 stars Its a cool movie,to come on TV
Reviewed in the United States on November 25, 2009
Verified Purchase
I saw it when it came on cartoonetwork at first before it came on I thought it was going to be like the first one.But I was wrong it was way better than the first one if you ever watch the TV show and liked it then your enjoy this movie.Every thing about the show was just like in the movie Kevin was cool and funny ,Gwen powers was the same wich was cool but Ben did the best job in the movie and his aliens where way better then the first movie.I think they should make another one I just have one more thing to say just give it a chance dont judge a book buy its cover but the cover is cool to thanks.
Read more
14 people found this helpful
Helpful
Comment Report abuse
See all reviews

Amazon Customer
4.0 out of 5 stars Upgrade on Race Against Time
Reviewed in the United Kingdom on January 26, 2018
Verified Purchase
Definately recommend for Ben 10 fans.It's very different from Race Against Time and most of the differences are for the better.
Good
Kevin's actor is pretty good
Gwens actor is also good
The aliens look so much better in this film
Blu Ray comes with the first 2 episodes of Season 3 in 1080p
Very good cgi for a film like this
Bad
I don't like bens actor
Grandpa Max just doesn't remind me of Grandpa max
Only 2 aliens are used from the series with Nanomach making his first appearance
Didn't like elena as a character
Felt very bland at times
Didn't feel too much like ben 10

Overall, I would give this film a 6.5 out of 10. Ben 10 fans would love it, but neutrals might not
Read more
One person found this helpful
Report abuse

happy shopper
4.0 out of 5 stars Enjoyed by 6 year old
Reviewed in the United Kingdom on December 5, 2010
Verified Purchase
We got this for our 6 year who is a Ben 10 fan, and he enjoyed it. Have to say it was an easy-to-watch movie, a bit slow at times, but overall aimed suitably to the target audience. Kevin's car was probably the most talked about thing from the whole movie in our house! Reasonably priced for what it is, and has been watched more than a few times since we got it.
Read more
Report abuse

P. Cornwall
3.0 out of 5 stars ok, but not package is not all mit's wrapped up to be
Reviewed in the United Kingdom on March 11, 2013
Verified Purchase
Bought for my daughter and she enjoyed it, but it's more like an extended live episode than a film. That said it had a lot of action, stunts & special effects that she hoped for.
Biggest bug bear was that we had the impression it was inclusive of a digital download as shown on packaging which was the reason for buying blu ray, only to find the offer no longer available.
So would have bought a twin film dvd pack for he same price.
Read more
Report abuse

DB
5.0 out of 5 stars What a film!
Reviewed in the United Kingdom on March 1, 2013
Verified Purchase
It was an amazing take on the alien force series. It brings in much loved Ben 10 characters, who are very real. It is an amazing film. Action, adventure and comedy on one disc. It will keep you happy till the very end. What a film!
Read more
One person found this helpful
Report abuse
See all reviews