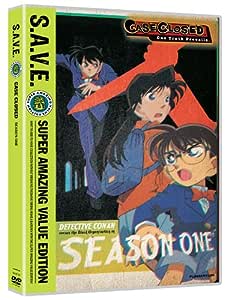 Case Closed is the final verdict for mystery fans who enjoy wrapping their minds around a good, old-fashioned whodunit. The criminal mind is a twisted place, and Jimmy Kudo knows the shady corridors of humanity better than any detective in the game. There ain't a bad guy in town who can outsmart him, so they try to put the super sleuth down for a dirt nap. But instead of ending up in a shallow grave, Jimmy wakes up to find himself turned back into a kid. Utilizing his unlikely new persona and the latest in crime-fighting gadgetry, he tracks down his assailants as boy detective Conan Edogawa.

4.8 out of 5 stars
4.8 out of 5
147 global ratings
How are ratings calculated?
To calculate the overall star rating and percentage breakdown by star, we don’t use a simple average. Instead, our system considers things like how recent a review is and if the reviewer bought the item on Amazon. It also analyzes reviews to verify trustworthiness.

Amazon Customer
5.0 out of 5 stars A completely underrated show in America
Reviewed in the United States on January 19, 2019
Verified Purchase
I bought all five of the seasons released by funimation including four of the movies. Sadly the first two were out of stock so those two I still don’t own and probably never will now.

I absolutely love this series and I’ve kept up with it as it is still releasing new episodes. Sadly, only the first 130 episodes were done by funimation out of what is now 928 episodes and still counting. Episodes 754-now are available on crunchy roll as well as netflix. Wish there was a way to get that middle chunk cause this is a bingeworthy show. There is a lot of filler but I even enjoyed those episodes tho the plot episodes were definitely better.

Hopefully someone new will be able to pick up this awesome series and give it the attention it deserves!
Read more
5 people found this helpful
Helpful
Comment Report abuse

meagan
5.0 out of 5 stars Love this series
Reviewed in the United States on January 13, 2017
Verified Purchase
Love this series! Despite the fact that the methods for solving the crimes throughout the series are basically always the same this show is still enjoyable. A friend of mine showed me case closed and I instantly got hooked. The series has just the right amount of humor and seriousness mixed into it. Its not too gory as an anime and I have to admit that the ways in which people die in the series is....creative, wouldn't recommend trying them on anyone even on people you dislike. All in all great series if you like a good murder/mystery show and don't mind alot of repetition.
Read more
7 people found this helpful
Helpful
Comment Report abuse

Always Samsung
5.0 out of 5 stars THANK YOU FUNIMATION
Reviewed in the United States on April 26, 2010
Verified Purchase
This hidden little GEM originally aired on the Cartoon Network at the wee hours after midnight. I don't think there is any graphic content (Blood and gore) in the show that required its airtime to be after midnight, but this is the US after all and most Japanese anime shows get censored one way or another if its airing on primetime TV. Needless to say, this show ended up getting canceled way too early and that shouldn't have been the case.

I was immediately hooked on the show from the very first episode that I saw. I didn't watch this from episode number one, but was intrigued nonetheless by the plot and murder mystery involved. However, I could never remember the exact show time and at that point in my life, I was too busy with work to have any free time to watch shows that I really liked. Case Closed is probably one of the greatest anime series to grace TV in my opinion. It ranks up there with Sailor Moon and Dragon Ball Z, but it's also in a class all its own since the genre is completely different.

The show starts off with teen detective sensation `Jimmy Kudo' solving a case. He is only seventeen years old, but is renowned for his detective skills and case solving expertise and is a bit of a celebrity in Japan where his efforts gets noticed in the local newspaper. Because of his popularity, he ends up getting most of the business and leaves Detective Richard Moore in the dust. Rachel, is Jimmy's best friend and harbors many strong feelings for him. Coincidentally, she is also Detective Moore's daughter. One day on a semi-date, Jimmy runs off to chase after some fishy looking men only to encounter his unfortunate fate. To make a long story short, Jimmy gets poisoned with an experimental drug that turns him into a kid and spends the rest of the series in the body of a pint size kid. In order to not get anyone in danger, he helps Detective Moore establish a bigger clientele base in hopes that over time he will eventually catch the men that did this to him. He does this by solving cases for Moore without him knowing. Jimmy gradually drops hints here and there to help Moore catch his culprit.

This is an addictive show and anyone who likes a murder mystery or a thriller will find themselves in love with the show as well. There is a great balance of humor and mystery. It's not an intense drama series, but its very light hearted and serious enough where it needs to be. Pick up this box set and watch all the excitement from the very beginning and follow Jimmy on his many adventures because "Only One Truth Prevails."

Rubio Quake
5.0 out of 5 stars Case Closed Season One
Reviewed in the United States on June 20, 2012
Verified Purchase
In the first season of Case Closed. Jimmy Kudo is the world most super sleuth in the business. Until one faithful night he gets in over his head by spying on someone he shouldn't have of. The Black Organization try's to poison him with a new type drug. But it doesn't work. Jimmy ends up awaking to find himself in a body of an ten year old boy. Now he's goes by the name Conan Edogawa and uses the latest crime fighting gadgetry, as he tracks down the assailant's as a boy detective. Now can Conan keep his new life a secret, while keeping on the trail of his assailants. Or will he remain a boy forever. Remember only One Truth Prevails.

Disc 01
01.The Big Shrink
02.The Kidnapped Debutante
03.Beware Of Idols
04.Fish Marks The Spot
05.The Time Bomb Express
06.Tragic Valentine
07.The Case Of The Mysterious Gifts

Cat Man
5.0 out of 5 stars It's elementary, Dear Conan-kun
Reviewed in the United Kingdom on April 27, 2018
Verified Purchase
I've recently rediscovered anime in a big way. I started watching this later in the series on Netflix who have a small selection of subbed episodes. It was really fun and intriguing so I bought this set to see how it all began as I did not fully understand the back story. Top notch entertainment. Have ordered the rest of the available English dubs and am super excited to find Crunchyroll have a healthy range of later subbed episodes not available in a dubbed format.

An aside to those who hate the Anglicisation of the names and some expressions the English subtitles on this set are a transliteration of the Japanese version not the dub so you can either chill after work enjoying this show in your mother tongue dubbed. Or for the language purist on a Saturday night switch to the Japanese track and turn the subtitles on if you want a more authentic experience. Out of curiosity I actually watched a dubbed episode with the subtitles on just to see how it had been changed. Apart from a change of names and expressions (for instance in one episode where Conan and friends solve clues to find some stolen gold, bank robbers referred to as simply 'robbers' in the Japanese are referred to in the English dub as Italians), reflecting the difference of viewpoint between a largely homogeneous society (Japan) Vs a multicultural society (America) and the attempt made by Funimation to make this show as appeal to as wide as possible an audience in the English speaking world. Despite this it did not change the plot or the story and it was very easy to follow both as they all followed the same premise and plot. This is the same process that has successfully been applied to probably the most successful anime translation in the English speaking world, Pokémon.

Furthermore as a Christian who cannot read Greek or Hebrew this is something I am very used to so doesn't bother me at all. It's like the difference between the King James Bible and the New International Version, both convey the same message however in slightly different ways, but this does nothing to detract from the original meaning.

It is sad that it never got picked up for general English release after season 5 however it all boiled down to economics. At the time this was released in the 90s there was stiff competition with other Japanese fayre most notably Dragon Ball Z and Pokémon which meant this show ended up relegated to graveyard times where only the dedicated fans stuck with it. We see here the unfortunate side effect of capitalism and the free market. If there is no money in something, or they continue to bleed money as CC did, it will get dropped. I am so grateful that Funimation however authorized the release of these sets and would highly recommend any serious fan of anime to give at least season one a try.
Read more
Report abuse

Zhuo
5.0 out of 5 stars Five Stars
Reviewed in the United Kingdom on November 20, 2014
Verified Purchase
It was great and arrived in perfect condition without a scratch
Read more
Report abuse

Page 1 of 1 Start overPage 1 of 1
This shopping feature will continue to load items when the Enter key is pressed. In order to navigate out of this carousel please use your heading shortcut key to navigate to the next or previous heading.
Back
Next
Pages with related products. See and discover other items: detective conan prime, anime series movies