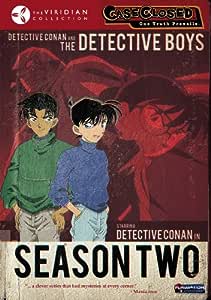 Case Closed is the final verdict for mystery fans who enjoy wrapping their minds around a good, old-fashioned whodunit.

The criminal mind is a twisted place, and Jimmy Kudo knows the shady corridors of humanity better than any detective in the game. There ain’t a bad guy in town who can outsmart him, so they try to put the super sleuth down for a dirt nap. But instead of ending up in a shallow grave, Jimmy wakes up to find himself turned back into a kid. Utilizing his unlikely new persona and the latest in crime-fighting gadgetry, he tracks down his assailants as boy detective Conan Edogawa.

4.8 out of 5 stars
4.8 out of 5
41 global ratings
How are ratings calculated?
To calculate the overall star rating and percentage breakdown by star, we don’t use a simple average. Instead, our system considers things like how recent a review is and if the reviewer bought the item on Amazon. It also analyzes reviews to verify trustworthiness.
Top reviews

Rubio Quake
5.0 out of 5 stars Case Closed Season Two
Reviewed in the United States on June 20, 2012
Verified Purchase
In the second season of Case Closed. Conan is still on the trail of the black organization. He now stay with the famous detective Moore. But the great he's not, Conan has been solving all of Richard case without anyone knowing it. Rachel is the daughter of the not so great detective, she keeps her eye on Conan to keep him out of harms way. Little does she know that Conan is the one solving all the case handed down to Richard. Harley Hartwell is know as the western detective and comes to find Jimmy Kudo an what was happen to him. Will He find out Conan secret or can Conan pull the wool of the great western detective. Remember only One Truth Prevails.

nightcloak74
4.0 out of 5 stars was not quite what I expected, but...
Reviewed in the United States on March 12, 2014
Verified Purchase
I ordered this because I had season 1 of the Viridian Collection edition already. Unfortunately, this one does not look like it's picture. Just a matter of ascetics on my shelf, but annoying at any rate. It doesn't even say Viridian Collection on it, or have the Viridian logo.

That being said, It is still Case Closed Season 2, and at a reasonable price. I thoroughly enjoyed watching this set to the point that I watched it in two settings. Had time permitted, I would have watched it in one sitting.

I am an adult, and I am not sure how well suited this series is for your children. Read the next paragraph, and decide for yourself on that. I don't think my child is mature enough to even understand this show, but each child is different.

This is a mystery series where 3/4 or more of the episodes have to deal with murders, often showing blood and gore. Flowing blood is often shown via flowing light, but if you don't want your child to see dead bodies, then this is not for your child. The series takes a heavy nod from Sherlock Holmes, even the name the lead character chooses points at it. The clues made available to you, granted some are not in English as I recall seeing them in the season 1 Viridian Collection edition. At any rate, the crimes are quite solvable, which makes it fun to watch. That way you can try your luck at the case and see if you were right at the end of each episode. If you like murder mysteries and Anime, I can think of no better series than Case Closed.
Read more
2 people found this helpful
Helpful
Report abuse

John LeSueur
5.0 out of 5 stars Great Mystery/Detective Anime
Reviewed in the United States on March 12, 2013
Verified Purchase
This is a excellent anime series for those who like mystery and detective series. With the main character (Conan) being an up and coming great detective, yet forced to live in a young boy's body after he was forced to take some terrible new and experimental pill, the series becomes quite intriguing as the boy must now gather the clues and solve the crime in different ways since no one would likely believe a little kid. Each episode is just so fun to watch as Conan somehow manages to gather all the clues, solve the crime, and bring the criminals to justice using several different methods. It is also aways fun to try and figure out who committed the crime before Conan does. Season 2 is just as great as the previous. It is not too violent, and it still has all of the wonderful pieces to a great mystery/detective series.
Read more
One person found this helpful
Helpful
Report abuse

Brittany
5.0 out of 5 stars Package came early!!! :D
Reviewed in the United States on July 24, 2013
Verified Purchase
I am a case closed fan and I could never find the seasons in stores. For a new season and for $17 (plus shipping), that's not bad as compared to the $50 I used to pay in retail stores for seasons I previously purchased..my package came in mint condition and earlier than the due date!!! I recommend, indeed! :D
Read more
One person found this helpful
Helpful
Report abuse

Jonathan Mcdonald
5.0 out of 5 stars great series
Reviewed in the United States on May 2, 2010
Verified Purchase
This was a great series, and I really enjoyed watching it. This season seemed to have a lot dealing with Richard's past and had some humorous parts (of course, it is Case Closed). Jimmy makes another appearance, though briefly. There is a rival detective which adds to this show, especially since the new detective is as smart, or at least close to as smart as Jimmy
Read more
2 people found this helpful
Helpful
Report abuse

LaKendric Bernard West Jr.
5.0 out of 5 stars TOP NOTCH ANIME
Reviewed in the United States on December 14, 2013
Verified Purchase
AWESOME! I KNEW IT! I KNEW IT! I FREAKIN KNEW IT!!! I KNEW THIS SERIES WAS GONNA BE AWESOME AND LOOK I WAS RIGHT! I KNOW GOLD WHEN I SEE IT! I PLAN ON BUYING EVERY CASE CLOSED DVD FROM NOW ON! AND EVERYONE ELSE SHOULD, TOO! TRUST ME IT'S WORTH IT!!!
Read more
One person found this helpful
Helpful
Report abuse

Amazon Customer
4.0 out of 5 stars The title song is off
Reviewed in the United States on June 11, 2013
Verified Purchase
My biggest issue with the subbed version of this series by funimation is that the title song is a few seconds off from the original. It's fine in the dubbed version, which is really weird. Also I really hate the dub. It sounds phoned in with no real emotion to it. However, I really love this series. It's fun and engaging, and the story stays interesting.
Read more
Helpful
Report abuse
See all reviews