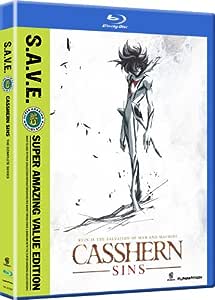 Casshern – a cybernetic assassin with no memory of his past – awakens in a corrosive wasteland where nothing survives for long. A plague known as the Ruin sweeps across this once-vibrant world, reducing everything in its path to rubble and scattering any chance for salvation. Robots and humans alike – or what little remains of them – seek vengeance against Casshern for the life he took and the role he played in their Ruin. A machine built to kill, Casshern murdered the last hope for this world, but now, lost in a future he does not recognize, he will fight to save the dying.

Casshern – a cybernetic assassin with no memory of his past – awakens in a corrosive wasteland where nothing survives for long. A plague known as the Ruin sweeps across this once-vibrant world, reducing everything in its path to rubble and scattering any chance for salvation. Robots and humans alike – or what little remains of them – seek vengeance against Casshern for the life he took and the role he played in their Ruin. A machine built to kill, Casshern murdered the last hope for this world, but now, lost in a future he does not recognize, he will fight to save the dying.

4.5 out of 5 stars
4.5 out of 5
142 customer ratings
How does Amazon calculate star ratings?
Amazon calculates a product’s star ratings based on a machine learned model instead of a raw data average. The model takes into account factors including the age of a rating, whether the ratings are from verified purchasers, and factors that establish reviewer trustworthiness.
Top reviews

Shelby
5.0 out of 5 stars Casshern SINS
Reviewed in the United States on June 15, 2014
Verified Purchase
Let me preface this by saying that I am NOT an anime person. I can count how many animes (mostly from the nineties) that I actually enjoy on one hand, and I had no interest in expanding that list until I became interested in actually getting into animation as a hobby/career. I thought it would be good to look for different art and animation styles to study.

So I started a reluctant search for another anime that I would actually enjoy(I am RIDICULOUSLY picky when it comes to anime)...and after saying 'no' to a long list depending on the story line or reviews, I stumbled upon Casshern SINS. The artwork immediately caught my attention. A beautiful, soft yet almost decayed look and very different than other animes I'd seen. After picking through almost every review, I also became interested in the story and decided to take a chance...and watched the entire series in one weekend.

Casshern SINS has got to be one of the most tragically beautiful things I have ever seen. Everything, from the artwork to the characters to the storyline and animation is breath taking. The struggle every character goes through is wonderfully portrayed, and I quickly fell helplessly in love with them all. I gotta admit, the hair took me some time to get used to. One of the girls' bangs could clothesline someone, and I have no idea how Casshern fits his wild mane beneath that tiny little swim cap thing he puts on for battle, but you get used to it. You can't help but feel for these guys, and root for them every step of the way. Even the villains are just seeking what they see as their last hope in a dead world.

The story line, though its horribly heart breaking in some places, is different but a refreshing change to the usual plot you get. As a previous review mentioned, it is a very slow process but the characters make it enjoyable. The characters are actually the best part of the whole series in my opinion. I looooove seeing a character change and grow over a period of time, and you get that in full force with this anime. Casshern stole my heart from the beginning, and so did Ringo and Lyuze and Dio the second they stepped onscreen.

The animation is beautiful, also. The fight scenes are raw and 'in your face', and extremely brutal but still graceful, like its an art. Which is amazing. I'm a sucker for fight scenes, having been raised on DBZ and Yu Yu Hakusho, and Casshern SINS does NOT disappoint.

All in all, I was beyond impressed, and had no idea what to do with my life after the last episode ended. If you're looking for something that has a perfect blend of characters, character growth, an awesome storyline and beautiful animation, this is it. I have never become so obsessed with an anime so quickly before.

Graccounus
5.0 out of 5 stars Beautiful
Reviewed in the United States on July 12, 2015
Verified Purchase
I have never used this one word to describe an anime series but, "Beautiful". One of the first anime I ever watched was Casshan: Robot Hunter back in the early 90s. I was a teen then. I'm over 30 and been watching anime since my early teens when the Sci-Fi channel had anime week. This is one of the most unique I've ever seen.

You can pause almost ANYWHERE in the ENTIRE series and make a quality background out of it. Visually, the animators did a fantastic job from start to finish.

Now, this won't be for everyone. While there's Lots of visceral action in every ep., this does not center around action, but rather humanity, choices and burdens. This is DEEP. Probably too deep if you're just looking for an action flick. It'll be so deep, you can't see it. This is very dark. But, it's not Demon City Shinjuku dark, but almost a "hopeless dark" from the very beginning.

Throughout the series, Casshern is trying to piece together how and why the world has fallen to the Ruin, and what part did he play in it (if any). This is where the story is very well written: tying in previous Casshern/Cassan story after the fall of Braiking Boss/Black King. Though, loose depending on what story you pull from. But it builds on the previous story's to make something viable and believable. You follow Casshern with the same amount of confusion and hints to piece things together as the series unfolds. This is where we separate from just a dark and depressing story, to something beautiful and tragic at the same time. Again, not for everyone.

However, what is for everyone is the slow roast of a delicious story, Beautiful visuals, fitting musical score and unique blend of how deep and compelling a "cartoon" can be. I don't cosign on buying every or any anime on blu-ray because it's just not always worth it. However, I say you'd be missing A LOT to not watch this in hi-quality format (especially for this many episodes at this price).
Read more
5 people found this helpful
Helpful
Comment Report abuse

Karenann
5.0 out of 5 stars "Every being lives for something with every breath they take." - Casshern
Reviewed in the United States on March 7, 2015
Verified Purchase
I love this series from the beginning to the end. I was looking for an anime that would reel me in, peak my emotions and have me wishing that the story wouldn't end as soon as it did - and this one delivered. The storyline, main characters and graphics are hauntingly beautiful and necessarily dark due to the subject matter. The background music is stirringly moody and in some cases has a tendency to strike a chord deep within the viewer's heart. (This viewer, in particular, was moved to tears more than once.) When I bought this series I really didn't know what to expect as far as the graphics were concerned due to the fact that the cover graphics didn't show me much and I had no prior knowledge of any of the Casshern presentations before this one. I was quite pleased that the graphics are very well done and, in many instances, richly enhance the story. The majority of the episodes focus on a single, solitary visit with a character unique to that specific episode. Each of these characters has an interesting story of their own to share. Interlace this with the storyline of the main characters at the forefront and you have the recipe for a well-rounded series. Casshern, himself, experiences serious character development with self-discovery throughout the series. He shows the courage and conviction of a true hero and wears his conscience on his sleeve. At times he actually shows tenderness, which, in my book, shows additional strength of character. The remaining main characters eventually reveal that of which they have evolved, and by the end of the series what they are destined to become. I couldn't help but become attached to the majority of them. (There are no unanswered questions about any of them which is not always the rule in some of the animes I've seen before this one.) I got the full sense of closure at the end, but at the same time, I wasn't left feeling that this will be the last of Casshern. (I sure hope not!) I would highly recommend Casshern Sins to anyone looking for a good, solid series.
Read more
2 people found this helpful
Helpful
Comment Report abuse
See all reviews from the United States

Hammy
3.0 out of 5 stars Grimdark sci-fi anime
Reviewed in Canada on May 2, 2019
Verified Purchase
Series is a grim and depressing look at a dying world. I didn’t like how repetitive the episodes felt. The animation is crisp and fluid and the fight scenes are top notch.
Read more
Helpful
Sending feedback...
Thank you for your feedback.
Sorry, we failed to record your vote. Please try again
Report abuse

Harbinger
5.0 out of 5 stars Deep and complex. Can be viewed many times over.
Reviewed in Canada on June 29, 2015
Verified Purchase
A series that I can watch over and over again. I sometimes pause it and just enjoy the imagery.
Read more
Helpful
Sending feedback...
Thank you for your feedback.
Sorry, we failed to record your vote. Please try again
Report abuse

serika*
5.0 out of 5 stars 良い作品だと思います。
Reviewed in Japan on April 26, 2013
Verified Purchase
全体的に暗い雰囲気で、生と死という重いテーマになっています。

Page 1 of 1 Start overPage 1 of 1
This shopping feature will continue to load items when the Enter key is pressed. In order to navigate out of this carousel please use your heading shortcut key to navigate to the next or previous heading.
Back
Next
Pages with related products. See and discover other items: anime complete series, anime complete, anime series movies