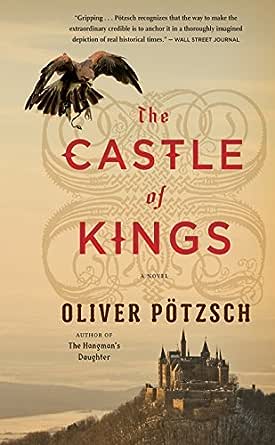 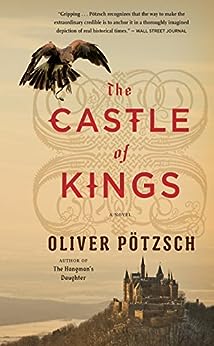 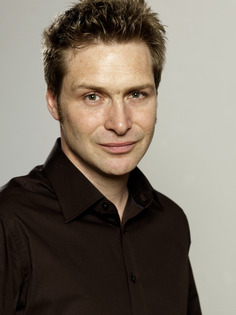 The Castle of Kings Kindle Edition

Oliver Potzsch is the author of the bestselling Hangman's Daughter series. He has worked for years as a scriptwriter for Bavarian television in Germany.

In 1524, in what is now Germany, hundreds of thousands of peasants revolted against the harsh treatment they suffered at the hands of their aristocratic overlords. Agnes is the daughter of one of these overlords, but she is not a typical sixteenth-century girl, refusing to wear dresses and spending more time with her pet falcon than potential suitors. There is only one suitor she is interested in: Mathis, a childhood friend whom she can never marry because he is a commoner, the son of a smith. Though his knowledge of the new trade of gunsmithing gains Mathis a bit of prestige, it is not the sort that will bring money to Agnes’s struggling father. As they grow up amidst the turmoil of what becomes the Peasants’ War, it begins to seem that they are simply destined to be apart.

Over the next two years, Agnes and Mathis travel the countryside, tossed about by the war. They are each captured by and escape from various factions, participate in massive battles, make new friends both noble and peasant, and fall in love. Meanwhile, Agnes’s falcon finds a mysterious ring, and Agnes begins having strange but seemingly meaningful dreams. Dreams that lead the two lovers to revelations about their place in the world and in the emerging German states. With The Castle of Kings, Oliver Pötzsch has written a historical yarn that calls to mind Ken Follett’s The Pillars of the Earth and Bernard Cornwell’s Agincourt.


--This text refers to an out of print or unavailable edition of this title.

The main story of Trifels Castle and the German Peasants' War, with appearances by a few historical figures and accurate details of medieval life and weaponry, is quite fascinating...The story reads like Princess Bride with serious pirates, or The Count of Monte Cristo meets Snow White...Entertaining.

-- "Booklist" --This text refers to the audioCD edition.

“I loved every page, character, and plot twist of The Hangman’s Daughter, an inventive historical novel about a seventeenth-century hangman’s quest to save a witch—from himself.” — Scott Turow

“Swift and sure, compelling as any conspiracy theory, persuasive as any spasm of paranoia, The Dark Monk grips you at the base of your skull and doesn’t let go.” — Gregory Maguire, author of Wicked and Out of Oz

“Oliver Pötzsch has brought to life the heady smells and tastes, the true reality of an era we’ve never seen quite like this before. The hangman Jakob and his feisty daughter Magdalena are characters we will want to root for in many books to come.” — Katherine Neville, best-selling author of The Eight and The Magic Circle

“In this subtle, meticulously crafted story, every word is a possible clue, and the characters are so engaging that it’s impossible not to get involved in trying to help them figure the riddle out.” — Oprah.com

“Oliver Pötzsch has hatched a narrative redolent of Alfred Hitchcock’s best romantic thrillers, replete with mindboggling ciphers, distinctive villains, secret societies (exotic yet historically accurate), and other pleasures both sensual and cerebral.” — James Morrow, author of The Last Witchfinder
--This text refers to an out of print or unavailable edition of this title.
Read more

4.2 out of 5 stars
4.2 out of 5
145 customer ratings
How does Amazon calculate star ratings?
Amazon calculates a product’s star ratings based on a machine learned model instead of a raw data average. The model takes into account factors including the age of a rating, whether the ratings are from verified purchasers, and factors that establish reviewer trustworthiness.
Top Reviews

Degustibus Disputandum Non Est
5.0 out of 5 stars 644 pages!!
Reviewed in the United States on September 17, 2016
Verified Purchase
The thing I dislike about Potzsch books is that they are so long. But the thing I REALLY dislike is wanting them to be longer after I finish them. I read all the Hangman's Daughter series and The Ludwig Conspiracy. Castle is in a different style, but loved it, loved it. The addition of the map continues to be invaluable to my enjoyment. Then, the Afterword ties the historical novel to reality. If I were forced to find something to criticize, it would be that Mathis and Agnes were captured way too often. I hope that Potzsch will send me a note via falcon when his next book is available. Until then, I will continue humming an old Occitanian lullaby.
Read more
18 people found this helpful
Helpful
Comment Report abuse

jodi5678
5.0 out of 5 stars I was not disappointed. However
Reviewed in the United States on October 15, 2016
Verified Purchase
When I read to what I thought was the end, I discovered I was only 55% done. The author weaved and meshed the characters, giving little hints that foreshadowed future events. I continued reading and discovered once again, I was not at the end. But I was caught up in these characters' lives and there was no way to quit. I HAD to know the rest of the story. I was not disappointed. However, I can be slow to catch clues in my haste to read and I missed the clues that foretold the machinations of Melchior von Tinnengen.

I have previously read this author's Hangman's Daughter's series and his book on Ludwig II of Bavaria. All were well written with complex characters and a thoughtful attention to detail. I consider The Castle of Kings his best work that I've read so far. That is not to disparage the others. I would give them 5 stars also. This book deserves 10 stars.
Read more
15 people found this helpful
Helpful
Comment Report abuse

Mike B.
4.0 out of 5 stars Overall very good, but not perfect
Reviewed in the United States on July 11, 2018
Verified Purchase
This is the first novel by this author that I have read other than the Hangman's Daughter series which I just finished. Overall I think this book was more detailed/in-depth (in a good way) than the HD series, but it suffers from some of the cliches Potzsch likes to use in every story.

It starts out setting the scene - instead of Magdalena the hangman's daughter, we have Agnes, the daughter of a knight that controls a castle. Like Magdalena, she is strong-willed, speaks her mind when she isn't supposed to, and resents everything about her station in life. Then we have Mathis, a childhood friend who she has developed romantic feelings for...but it wouldn't be a Potzsch novel if that romance was "forbidden", as he is a lowly smith. Potzsch obsesses over these class divides in his stories, and on a basic level this is the same storyline as HD, just genderswapped. I don't mind too much since I'm sure such things were common back then, but it's kind of a cliche. I also found Agnes to be extremely Mary Sue-ish and probably the least interesting of the main characters - the stuff about her dreams was a bit contrived and too convenient, and she doesn't really do much aside from getting herself into situations that Mathis and others have to rescue her from.

Then we get into the mystery bit that seems to involve Agnes's heritage and a secretive group that has something to do with a ring that comes into her possession. I won't spoil the plot too much, but as the story progressed there were certain things that I noted.

First, as with Hangman's Daughter, Potzsch loves to have 3-4 plots developing at once and abruptly switches between them, almost always leaving you on a cliffhanger. This can be a little jarring, but at the same time drives you to continue reading so you can figure out what that section was building up to. I finished this book in just 2 sittings as a result. Another thing the author likes to do is tries to make the mystery impossible to solve until he reveals it to you. This time though if you have read his other work and how he portrays the surprise villains and know how to dodge the red herrings, it was super easy to predict. The only question was the motive.

The ending was very disappointing to me, even though I loved the rest of the story despite the above flaws. Agnes was finally in the position to make a difference (to some degree - due to her being a woman there were of course limitations to what she could have done), and she just basically said "I don't wanna" and the ending just felt like nothing was resolved.

To summarize, if you liked The Hangman's Daughter series, you'll probably like this one. It has all the cool historical bits mixed with fiction to make it more readable, and it is a very engaging story that you don't want to put down. It's also interesting if you've ever lived in Germany or been around the area. For example I just was at Trifels castle last year so it added just a little bit of intrigue to it all trying to imagine how the modern town of Annweiler and the rebuilt castle were back then.
Read more
5 people found this helpful
Helpful
Comment Report abuse

B. Cobb
5.0 out of 5 stars A good long read.
Reviewed in the United States on September 29, 2016
Verified Purchase
I liked this book. It was so far and above Hangman's Daughter I had a hard time realizing it was the same author. I will say though I don't think the issue was the author, but the translator. This was so much better translated than prior novels. Hangman's Daughter is chocked full of ridiculous 20th century phrases you would never have heard in the 17th century.
Read more
14 people found this helpful
Helpful
Comment Report abuse
See all reviews from the United States

KS
5.0 out of 5 stars Excellent story
Reviewed in Canada on August 10, 2016
Verified Purchase
Loving this book. Similar to Potzsch's 'Hangman's Daughter' series but with new characters and different story lines. The detail of living conditions during the time period for the peasant class is informative and interesting.
Read more
One person found this helpful
Helpful
Sending feedback...
Thank you for your feedback.
Sorry, we failed to record your vote. Please try again
Report abuse