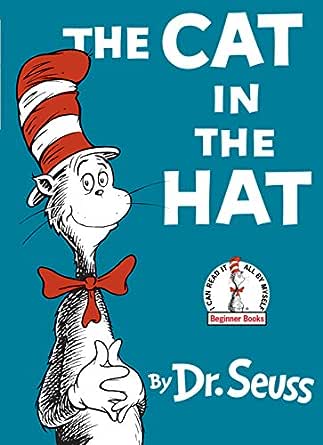 You've subscribed to Beginner Books(R)! We will preorder your items within 24 hours of when they become available. When new books are released, we'll charge your default payment method for the lowest price available during the pre-order period.
Update your device or payment method, cancel individual pre-orders or your subscription at
Your Memberships & Subscriptions
There was an error. We were unable to process your subscription due to an error. Please refresh and try again. 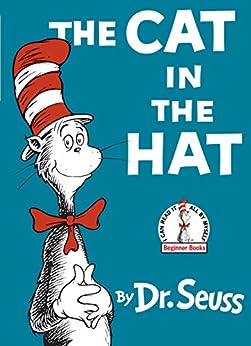 The Cat in the Hat (Beginner Books(R)) Kindle Edition 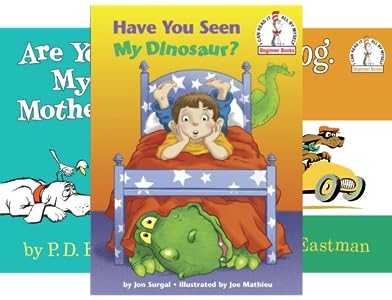 The Cat in the Hat came to play one rainy, nothing-to-do afternoon--and changed the world of beginning children's literature forever. His hilarious antics are "recommended for all libraries" --School Library Journal (starred) The accompanying cassette has a listening side for nonreaders and a read-aloud side with page-turn signals for youngsters just learning to read. --This text refers to an out of print or unavailable edition of this title.

Dr. Seuss was born Theodor Geisel in Springfield, Massachusetts on March 2, 1904.  After attending Dartmouth College and Oxford University, he began a career in advertising.  His advertising cartoons, featuring Quick, Henry, the Flit!,  appeared in several leading American magazines.
Dr. Seuss's first children's book, And To Think That I Saw It On Mulberry Street, hit the market in 1937, and the world of children's literature was changed forever!
In 1957, Seuss's The Cat in the Hat became the prototype for one of Random House's best- selling series, Beginner Books.  This popular series combined engaging stories with outrageous illustrations and playful sounds to teach basic reading skills.
Brilliant, playful, and always respectful of children, Dr. Seuss charmed his way into the consciousness of four generations of youngsters and parents.  In the process, he helped kids learn to read.
Winner of the Pulitzer Prize in 1984 and three Academy Awards, Seuss was the author and illustrator of 44 children's books, some of which have been made into audiocassettes, animated television specials, and videos for children of all ages.  Even after his death in 1991, Dr. Seuss continues to be the best-selling author of children's books in the world.   --This text refers to an out of print or unavailable edition of this title.

He may be an old standby, but he never lets us down. When in doubt, turn to the story of the cat that transformed a dull, rainy afternoon into a magical and just-messy-enough adventure. There's another, hidden adventure, too: this book really will help children learn to read. With his simple and often single-vowel vocabulary, the good Doctor knew what he was doing: hear it, learn it, read it--laughing all the way. The Cat in the Hat is a must for any child's library. --This text refers to an alternate kindle_edition edition.

Two classic Dr. Seuss stories:
The Cat in the Hat: America's favorite frisky feline--the Cat in the Hat--is brought to life in this video version of the phenomenally popular story. Maybe You Should Fly A Jet! Maybe You Should Be a Vet!: For kids of all ages who are wondering what to be when they grow up, this delightful story offers some wonderfully wacky suggestions. 30 minutes. --This text refers to an alternate kindle_edition edition.

Everyone loves Dr. Seuss! A true original, he wrote and illustrated over 50

classic children's books with total sales of more than 100 million copies. For

children of all ages.

‘Dr. Seuss ignites a child’s imagination with his mischievous characters and zany verses.’
The Express

Geared toward younger viewers, this Beginner Book Video is a static, nonmusical version of the classic Dr. Seuss tale The Cat in the Hat (1957). It should not be confused with the 1972 TV special. While actors voice original narration and dialogue, original illustrations are brought to life via cutouts, with the result that there is some activity, but characters' lips don't move when they speak. School-aged children and adults may find the effect off-putting. (On the plus side, the Cat in the Hat is voiced by Allan Sherman.) The second story, Maybe You Should Fly a Jet! Maybe You Should Be a Vet! (1980), was written by Dr. Seuss (Theodor Geisel) under the pseudonym Theo. LeSieg, and is animated in the same fashion. Dr. Seuss did not illustrate the original story. As in the Beginner Book original, Michael J. Smollin is credited with the artwork. --Kathleen C. Fennessy --This text refers to an alternate kindle_edition edition.
Read more

4.9 out of 5 stars
4.9 out of 5
10,849 global ratings
How are ratings calculated?
To calculate the overall star rating and percentage breakdown by star, we don’t use a simple average. Instead, our system considers things like how recent a review is and if the reviewer bought the item on Amazon. It also analyzes reviews to verify trustworthiness.

Jay Dobbs
5.0 out of 5 stars Better hurry
Reviewed in the United States on March 2, 2021
Get it before it's banned.
Read more
215 people found this helpful
Helpful
Report abuse

GC
5.0 out of 5 stars classic
Reviewed in the United States on March 3, 2021
Verified Purchase
Of all the Suess books the most memorable of my childhood was Go, Dog, Go. However, I loved The Cat in the Hat. I read it to my children and gave it to my grandchildren. I read this so many times to my five children, that I have it memorized. Other books in my memorized Seuss repertoire are One Fish, Two Fish, Red Fish, Blue Fish, Green Eggs and Ham, and Hop of Pop. It's fun to hear my daughters read these aloud to their children with ExAcTlY the same inflections and voices. Maybe all those years of reading aloud every night (and all day long) were good for more than I knew. Anyway, Dr. Suess's books deserve a place in children's literature today as well as when he was new during my childhood. Racist my eye!
Read more
110 people found this helpful
Helpful
Report abuse

Stephen Olson
5.0 out of 5 stars Cancel Dr Seuss if you dare
Reviewed in the United States on March 5, 2021
Verified Purchase
Dear Amazon,
Long time Prime and Kindle customer. Please be advised that I will cancel you if I hear you cancel Dr. Seuss. Just one dude that spends money on your platform. I love Amazon, and would hate to let you go.
Stephen Olson

Pennymom3
5.0 out of 5 stars Fun rhyming words!
Reviewed in the United States on March 2, 2021
Verified Purchase
Charming children’s book! The PreK class loved it!! It also send the message to clean up after yourself
Read more
19 people found this helpful
Helpful
Report abuse

Mississippi Yankee
5.0 out of 5 stars Classic by the King of the Classics
Reviewed in the United States on June 21, 2020
Verified Purchase
“Cat in the Hat “must be the most famous and beloved childrens beginner reading book of all time. Heavy on phonics, with charming illustrations, “Cat in the Hat” defines classic.

Dr. Seuss not only invented the genre, he has never been replaced as its king. This book is one of my all-time favorites for beginning readers, only, perhaps, tied with Dr. Seuss’s “Green Eggs and Ham”and “Fox in Socks. “

Perfect as a read aloud for toddlers, the book is also loved by older children . What a master Dr. Seuss was! His books for older readers are also wonderful. “Cat in the Hat” is compelling, funny, big hearted and memorable. Could learning possibly be more fun?

Ryan Barrett
5.0 out of 5 stars it has been beautifully designed to be read out aloud
Reviewed in the United Kingdom on June 28, 2017
Verified Purchase
I never read these as a kid. Now I'm a dad, and I needed some English-language books to read to my son (his native language is Dutch).

At first he didn't want to read The Cat In The Hat - it didn't have a monster, a tiger or a pooping dinosaur on the cover.

Thankfully papa insisted. My lad was immediately transfixed. The story has a rhythm, it has been beautifully designed to be read out aloud. It feels like it was written using a small set of fairly short words; these are then smartly combined to keep text fresh and build the rhythm.

That was about a week ago; now my son is constantly asking papa to read the Cat Hat book. What more can I say? It's a masterpiece.

Home.life
5.0 out of 5 stars Rhyming Mischievous Cat
Reviewed in the United Kingdom on December 28, 2020
Verified Purchase
This story really kept my 4 years old attention... a rhyming story about a cat who visits a pair of children who have nothing to do a rainy day and the mischief he gets up to.

Also teaches them to tidy up after themselves which my son noticed so always a positive!

We purchased this after being a fan of the grinch who stole Christmas... another good book in the series to try.

Manda N
5.0 out of 5 stars Beautiful book, great to read aloud
Reviewed in the United Kingdom on May 4, 2020
Verified Purchase
Chosen for a virtual lockdown read from us grandparents to 2 year old grand daughter. It’s quite a long story; 15 minutes to read but she kept attention throughout, Despite her not knowing the story previously.

sarah
5.0 out of 5 stars Brilliant book, very quick delivery
Reviewed in the United Kingdom on November 10, 2020
Verified Purchase
This is a brilliant book. Very quick delivery, and package was plain on the outside so perfect as I am using as a Xmas present. I’ve had a look inside just what I wanted lovely clear picture, I love the way the book goes it has. Good rythem. My son will love this book I can’t wait to start reading this with him.
Read more
One person found this helpful
Report abuse

A. Mather
5.0 out of 5 stars Oh My God! Is this still going? Awesome!
Reviewed in the United Kingdom on July 1, 2019
Verified Purchase
I grew up to Cat in the Hat - zany, outrageous, fun, educational... how wonderful that it's not only still going, but the #1 best-seller in children's poetry apparently! Definitely ordering a few versions for nostalgia and inspiration!
Read more
One person found this helpful
Report abuse
See all reviews