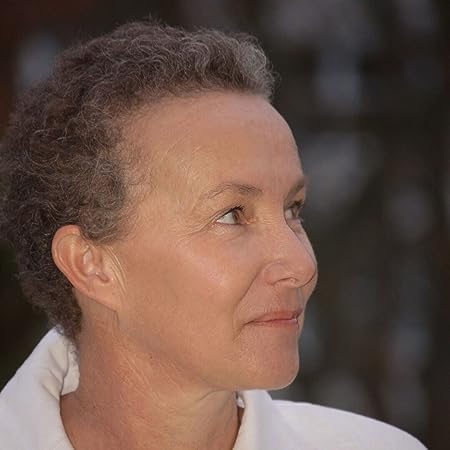 Cathy Buckle is a best selling Zimbabwean author. Her blog 'Letter from Zimbabwe' has been running for 22 years, is read around the world and regularly features in international print and broadcast media. Cathy's first book 'African Tears' was serialised in the UK by The Sunday Times. Cathy's accounts of the raw reality of life for ordinary Zimbabweans demonstrates the resilience of a people who have lived for decades in economic and political chaos. Cathy's writing reflects the warmth of the people and the beauty of the landscape both of which she reports sustain her and inspire her to keep writing the story of Zimbabwe.. For more about Cathy or to read past blog posts her website is cathybuckle.co.zw 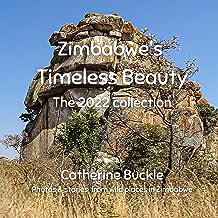 Zimbabwe's Timeless Beauty: The 2022 Collection: Photos and Stories from Wild Places in Zimbabwe (Wild and beautiful Zimbabwe) Sep 12, 2022
by Catherine Buckle
( 2 )
$5.99
If you long for the quiet beauty of wild places.

If you love Zimbabwe.

If part of you still misses Africa

This book of photos and short stories from Cathy's times in wild and beautiful Zimbabwe should soothe your soul.

BUT... and this is important! The stunning colour photographs in this book are key to your enjoyment. We suggest you download the free Kindle app and read this on a colour device.

Ok back to the temptation!

Sit with Cathy at the riverbank and watch the sun drop into the horizon while elephants splash and flop in the water in front of you. Close your eyes, imagine the hot sun on your face and listen to the stories of Zimbabwe's enduring beauty whispering in the wind.

You will love this book because it will remind you of, or tempt you to have, your own wonderful adventures in Zimbabwe. 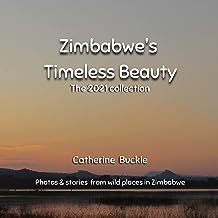 Zimbabwe's Timeless Beauty: The 2021 Collection: Photos and stories from wild places in Zimbabwe (Wild and beautiful Zimbabwe Book 1) Sep 13, 2022
by Catherine Buckle
$5.99
If you have ever lived in Zimbabwe

If you still remember the blue of the sky

If part of you still misses Africa

This little book of stunning photographs and evocative short stories will probably leave you yearning for those moments when the beauty of the natural world overwhelms and restores you.

BUT...and this is important, the stunning colour photographs in this book are key to your enjoyment. We suggest you download the free Kindle app and read this on a colour device.

Ok back to the temptation!

Kopjes and mountains, waterfalls and rivers, wild places and beautiful creatures, red and orange sunsets, pink and apricot sunrises. Can you almost hear the eagle screeching or the hippos grunting; can you sense the warmth of the sun and see the golden grass swaying in the warm breeze?

You will love this little book because it will remind you how beautiful Zimbabwe is. 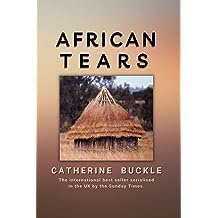 It was quiet; so quiet I could not even hear birds outside;

all I could hear was my heart pounding.

Cathy Buckle home alone at the time, locked herself in her study, sat on the floor and put her hands over her head. ‘African Tears’ is the story of the invasion of Stow Farm, Marondera by war veterans and supporters of Robert Mugabe. A farm bought ten years after independence and with formal Zimbabwean government approval.

Serialised in the UK by the Sunday Times.

You will love this book because it is about finding courage and inner strength and a mother’s determination to protect her son. 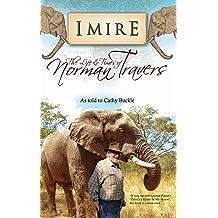 IMIRE: The Life and Times of Norman Travers (Wild and beautiful Zimbabwe) Aug 8, 2022
by Catherine Buckle
( 2 )
$5.99
A lifetime of remarkable adventures in Zimbabwe

A three legged leopard, a hippo and a lion in the garden.

A crocodile in the swimming pool

Norman was a visionary conservationist who also hunted, fished and farmed. He lived a life full of adventure and built Imire into a significant wildlife park. Norman and Gilly’s family life included lions, elephants, leopards, hippo and '...a stream of naughty, smelly little animals...'

Norman is a man of those times; often a glass of whisky, always a pipe and a twinkle in his eye as he remembers these wonderful stories.

This kindle edition includes charming illustrations and a few photos very resonant of the age.

You will love this book because it is a warm hearted tribute to a life lived in Africa. 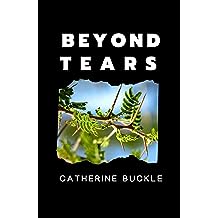 Beyond Tears (Life During Political Crises) Aug 9, 2022
by Catherine Buckle
( 2 )
$5.99
Abducted from the police station

Surely the police will do something

The whole town was hiding a secret

Some must have been witnesses and other accomplices to murder, torture and brutality.

Beyond Tears is the story of events that ripped Zimbabwe apart between 2000 and 2002. Eyewitness accounts of anarchy, harassment, intimidation and the foulest abuse of citizens by their own government.

The wind, once my friend and comforter, had become my tormentor and persecutor. Coursing over the granite kopjes, the wind was filled with voices and secrets.

You will want to read this book because it tells an important story about the evils a corrupt regime will unleash just to stay in power. There is a lesson here for the world. 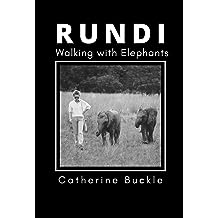 RUNDI Walking with Elephants (Wild and beautiful Zimbabwe) Aug 9, 2022
by Catherine Buckle
( 1 )
$5.99
Their mothers have been killed

They have been in a noisy truck for hours

Can they even survive without their herd?

They haven’t eaten for two days; they are not even weaned and they are scared.

Slowly, gently and patiently Cathy and Simon coax the baby elephants to risk a taste of milky porridge. The male is more confident, the little female is much more wary. They have wounds which must be treated if they are to survive.

Will these little orphaned elephants now known as Rundi and Muku ever learn to trust humans? Will they be able to thrive in this new place?

You will love this book because of the moving story and charming photographs of these incredibly intelligent, characterful and sensitive creatures. 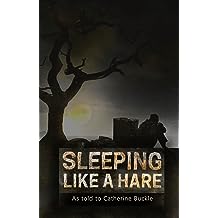 Days later it would be thick and sour

Wow she liked it very much

But now, even with a salary, Lovemore can’t afford to buy milk to go with his baby Blessing's porridge. The country is in crisis, he is paid in worthless Bearer Cheques. He has to do something. He and Martha agree; he has to go.

Lovemore leaves Zimbabwe and travels thousands of miles to Botswana to find work.

He is not alone, there are thousands and thousands of Zimbabweans looking for work. Now he is disliked and distrusted and will have to deal with the prejudice that faces all economic refugees.

But he has to make this work.

You will love this book because it is a poignant story about the love and loyalty that drive a man. 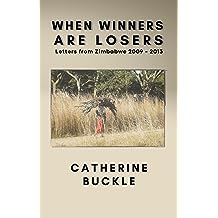 When Winners are Losers: Letters from Zimbabwe 2009 - 2013 (Eyewitness History) Aug 8, 2022
by Catherine Buckle
$5.99
In 2008 Zimbabwe was on the verge of collapse: food shortages, no money in the banks, widespread hunger and rampant cholera. The elections were deemed too close to call and another ballot ordered. An orgy of violence against opposition supporters left hundreds killed, thousands fleeing, and a quarter of a million people displaced. ‘When Winners are Losers’ records the events of the next five years, The opposition formed a government of national unity, worthless Zimbabwean dollars were replaced by US dollars and SA Rand; the economy began to recover. We clung on hoping for lasting change.
Read more
Other Formats: Hardcover , Paperback 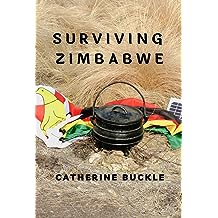 Supermarkets that are 2,400 kilometres away

Zimbabwe is in the height of economic and political collapse. How do you survive, without electricity, without mains water or food in the shops, without essential medical supplies. You queue for hours and then there is no petrol or money or bread or…

This is the story of Surviving Zimbabwe

You will love this story because you will witness ingenuity, resilience, courage and friendship emerging out of the struggle to survive. 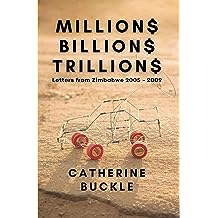 MILLIONS, BILLIONS, TRILLIONS: Letters from Zimbabwe 2005 - 2009 (Eyewitness History) Aug 11, 2022
by Catherine Buckle
$5.99
Inflation at over two hundred and thirty million percent. Twenty five zeros removed from the currency in thirty months. A third of the population fleeing the country to survive. Bank notes in denominations of millions, billions and trillions. Empty shops. Bartering for food; paying school fees with fuel coupons, car tyres and meat. ‘Millions Billions Trillions’ is the second book documenting Zimbabwe’s descent into darkness. Cathy Buckle, a mum living in a small town wrote this story in a collection of letters from Zimbabwe. They touched a nerve around the world.
Read more
Other Formats: Hardcover , Paperback 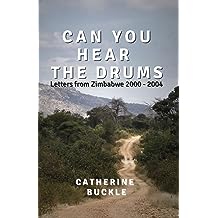 Can you Hear the Drums: Letters from Zimbabwe 2000 - 2004 (Eyewitness History Book 1) Aug 11, 2022
by Catherine Buckle
( 1 )
$5.99
‘Can you Hear the Drums’ is a collection of eyewitness accounts reported in letters from Zimbabwe. The letters document the country’s journey into lawlessness, turmoil and economic mayhem. Written by an ordinary mum living in a small town, the letters describe the reality of life for ordinary Zimbabweans at the start of the 21st century. This is not about propaganda, rhetoric or revolution but about how real people survived, endured, adapted and kept hope alive. Sometimes sad or frightening and often touching the letters are interspersed with news clips, humour and the absurdities that became the coping mechanisms for everyday survival in a country in meltdown.
Read more
Other Formats: Hardcover , Paperback 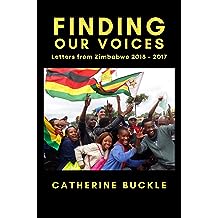 Finding our Voices: Letters from Zimbabwe 2013 2017 (Eyewitness History) Aug 8, 2022
by Catherine Buckle
$5.99
The last five years of Robert Mugabe’s grip on power were characterized by protests, demonstrations, and defiance, met with tear gas, baton sticks and brutality. ‘Finding our Voices’ tells the stories of those years which ended in a military takeover and the resignation of Robert Mugabe. The Years 2013 to 2017 will be remembered as the time when Zimbabweans found their voices, learnt the power of persistence and came together in huge crowds to say enough is enough. This is the fourth book in a series that chronicles two turbulent decades in Zimbabwean history.
Read more
Other Formats: Hardcover , Paperback