Dr. Cathy Seabrook graduated from the Ontario Veterinary College in 1981. She practised Equine and Small Animal medicine as an associate veterinarian in various practices until 1993, when she opened her own practice, The Island Animal Hospital, in her hometown of Mindemoya on Manitoulin Island, in Ontario, Canada. In the year 2005, she had her first experience in animal communication, necessitated by her very sick horse. She determined to learn it for herself and studied animal communication independently until 2009, when she took her first formal training in England, and then joined Animal Spirit Network, (Illinois) and graduated as a Professional Animal Communicator in 2011.

She and the animals have co-authored 5 KINDLE Books, namely Train Your Horses by Horses, Puppy Stuff by Puppies, Kitty Stuff by Kitties, Pony Stuff by Ponies and Survive Saying Goodbye to Your Pet by Pets.

She resides on Manitoulin Island on a horse farm with her two sons, four horses and Roarie the cat. 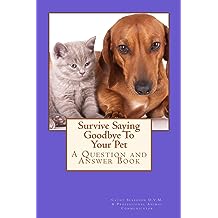 Survive Saying Goodbye To Your Pet (Animal Communication by Cathy Seabrook D.V.M. Book 4) Mar 23, 2013
by Cathy Seabrook
( 2 )
$9.99
Survive Saying Goodbye to Your Pet, written by a veteran veterinarian and Professional Animal Communicator, Cathy Seabrook, D.V.M., is dictated in its entirety by the Collective Consciousness of PETS. Herein you will find the delightful nature that is PET at its truest and finest grace, willing you, guiding you, absolving you and loving you through the most difficult time with them you will ever know. They have really never left you of course, simply left what you knew as them in physical form. For the first time, read a book about pet loss that does not break your heart in the reading of it! Prepare to add delight to departing in a way unimagined!
Read more
Other Formats: Paperback 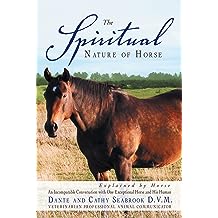 The Spiritual Nature of Horse Explained by Horse: An Incomparable Conversation Between One Exceptional Horse and His Human Nov 30, 2012
by Cathy Seabrook D.V.M. , Dante
( 2 )
$9.99

Now see a different perspective as Horse himself speaks from the ages, and inspires you with a deeper understanding of Horseness and purpose with you. See here what discovery there is regarding health in us, and mind games we play with you, our dearest opponent in Gamehood. We delight in our transactions and we delight in this presentation of our words regarding so many subjects we have longed for you to understand. I never mince words when given the opportunity to use them, so prepare for directness of Horse, honesty to a degree unchallenged in creatures, and benevolence in understanding as you have longed to know and be reassured about in your doings with us in history. And we are content now.

Read a little and let it soak, for this is horses desire when you interact with us. It will deepen as it sits with you and will take you to the level of appreciation and understanding that your heart and soul desires with us. 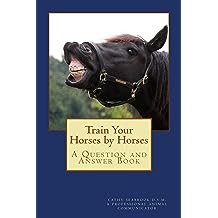 Train Your Horses by Horses (Animal Communication by Cathy Seabrook D.V.M. Book 5) Apr 4, 2013
by Cathy Seabrook
$9.99
Never before in history has there been an experience available in this degree of fascination with horses, for never before has HORSE been able to express in words what is in HORSE'S heart. Rare is the combination of Veterinarian and Professional Animal Communicator, and it is safe to say you have never seen a book like this, for it has never been offered in like kind on the planet. Prepare to be enchanted in the discovery of all that is HORSE in this powerful documentation of devotion to you, known collectively to horses as RIDER!
HORSE has long been a master story writer, accomplished in history with us, and in this leading edge training guide the future of horsemanship is challenged in a delightful way. "Partake of the dance with us," they ask, "by understanding our version of energy communication, so you may embrace and incorporate it into our relationships and training endeavors." This understanding is the secret of true unity and available to every horse person - without exception!
Here HORSE explains in extensive detail their keen perception of energy within us and their training experience with us, and tells us how to develop the ability to move them by empowering thought into creation of precise movement in them. It is an enchanting read as intricate details of both basic and complicated equine performance are elaborated on with infinite care and concise explanation.
Learn to master the energy nuances of "go" and "whoa", extended trot and slow canter, Piaffe and roll-back and countless other practical and magical movements in horse-dom. This will be a read unlike any other for horse people - full of horses' sensibility, directness and charm. Horses have a very particular manner of speaking, with some interesting words and phrasing, and you will be mesmerized in the reading of their story!
Read more 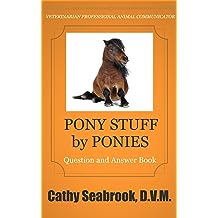 Pony Stuff by Ponies (Animal Communication by Cathy Seabrook, D.V.M. Book 4) Sep 7, 2012
by Cathy Seabrook
$9.99
This endearing pony masterpiece of commentary in question and answer format was written by Cathy Seabrook, D.V.M. and Professional Animal Communicator. We hope you enjoy page after page of ponies’ enchanting descriptions of pony life as they define their relationships with Mother, other animals and of course their favorite beings – children! Experience ponies’ impish charm like never before as they elaborate extensively on pony training, purpose and devotion, and experience for yourself the pixie that is PONY! Travel with ponies to a fairyland you knew as a child with them, and grab a little fairy dust for yourselves in the reading.
“Never before have we been so entranced – to be able to say what is on ponies’ minds so clearly, so profoundly and so timely! Children are waiting to hear our words to excel at all pony business, be it home pony or show jumper – the secret is here so brilliantly you cannot miss it. Bring your adult hearts back to pony land, and learn the secrets to grown up life too! We promise enchantment with ponies as never before in our explanations of endurance in timeless fairy tales, with children as our inspiration and soul mates.”
Read more
Other Formats: Paperback 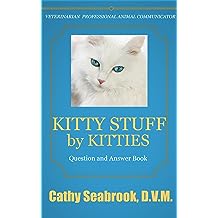 Kitty Stuff by Kitties (Animal Communication by Cathy Seabrook, D.V.M. Book 3) Sep 5, 2012
by Cathy Seabrook
( 4 )
$9.99
This enchanting, educational book of questions to and answers from kitties was written by Cathy Seabrook, D.V.M. and Professional Animal Communicator. We hope you enjoy page after page of KITTIES’ precisely chosen vernacular, instilling such reasonable explanation for the mystical characteristics that only cats harbour, addressing ideas and myths about cats long believed but never explained from their point of view. This collection of answers will delight and astound you in the discovery of the true work of cats in their relationships with us and the world at large. It is our guarantee it will change the way you look at cats and the way they look back at you!
“Marvel at our cleverness, where we befuddle you no more regarding our position in our lives together. See the brilliance of our dance in eternity, and learn the secret that cat has always known - we can change your life for you until you learn our secrets fully, and do it for yourselves.”
Read more 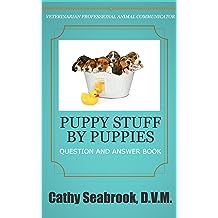 Puppy Stuff by Puppies (Animal Communication Series by Cathy Seabrook, D.V.M. Book 1) Sep 3, 2012
by Cathy Seabrook
$9.99
This enchanting, educational book of questions to and answers from puppies was written by Cathy Seabrook, D.V.M. and Professional Animal Communicator. Enjoy page after page of PUPPIES’ carefully constructed, charming messages, brimming with their best ideas for training and addressing behaviors we call ‘problems’. Puppies hold nothing back as they offer delightful explanations that denied them in such completeness until now. “We expect full compliance now,” they say, “as mankind finds the true sparkle that is puppy, magnified for all to know, in our very own words here”.
Read more 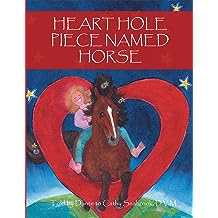 Dante is a very special story-telling horse. Heart Hole Piece Named Horse is the first story he wanted to tell the world. Dante wants us to honour the twinkling heritage we share with Horse, And reminds us that Children are half stars too you know. His story is told in his original words, and illustrated at his request by Dr. Seabrook.