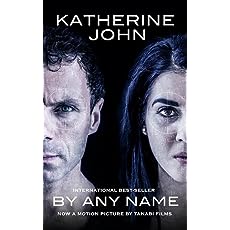 CATRIN COLLIER/KATHERINE JOHN/CARO FRENCH/KATHERINE HARDY/K A JOHN -
At present (2019) writing and researching film scripts and the second book in the Glyndwr trilogy - "Glyndwr, glorious shall their dragon be". She has just retrieved the rights to her Katherine John crime books, which can be found on Amazon - amazon.com/author/catrincollier - in kindle and paperback. Look out for her raunchy Caro French Farcreek novels, Lady Luck, Lady Lay, Lady Chance named after the Cullen boys' yachts.
She has penned scripts and has had 3 stage plays professionally performed. Her first novel, Hearts of Gold, filmed as a TV mini series by BBC Worldwide attracted an audience of 6.8 million on UK TV. TY CATRIN, an Education Centre in Pontypridd named after Catrin Collier, opened in 2003. Her Katherine John's crime book, By Any Name, was filmed by Tanabi in Wales in 2014, starring Cengiz Dervis, Samira Mohammed Ali and Dan Richardson. The photographs and video are from the filming.
Catrin's most bemused moment. When someone commented, "It will be wonderful for Pontypridd when you die." (Many of her novels are set in the town)
Her best "putting in place moment". When someone joined a queue at a signing session in Waterstones and waited ten minutes to say, "I don't want a book, love, but as you're here for two hours, look after my shopping for me." - She did.
Her proudest moment, when she discovered her Catrin Collier novel, One Last Summer, based on my Prussian born mother's wartime diaries was named recommended reading for adults by the Holocaust Day Memorial Trust.
Read more 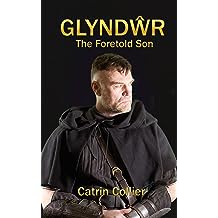 GLYNDWR: THE FORETOLD SON May 6, 2019
by CATRIN COLLIER
( 7 )
$5.30
The first historical novel in a meticulously researched series chronicling the life of the man behind the legend of Welsh hero, Owain Glyndŵr, who fought so valiantly for Welsh Independence
Read more
Other Formats: Paperback 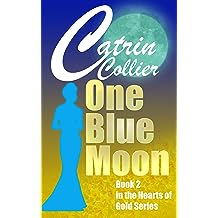 ONE BLUE MOON (HEARTS OF GOLD Book 2) May 13, 2019
by CATRIN COLLIER
( 94 )
$5.19
Ronnie Ronconi, the eldest son of a large, Italian/Welsh cafe-owning family is as ruthless in his private life as he is in business. He demands that Ronconi business affairs to take precedence over all else - and his sisters to marry Catholics. Right up until the moment he falls in love with Welsh, chapel-going, consumptive Maud who has been sent home from her post in Cardiff Infirmary to die.
And for the first time hard-hearted Ronnie finds himself wanting the impossible - he wants Maud 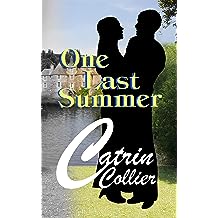 Allenstein, East Prussia, 1939 - Charlotte von Datski's parents host a glittering ball to celebrate her eighteenth birthday and announce her engagement to a Prussian Count. But Hitler is about to plunge the world into a war that will wipe East Prussia from the map.
1946 Charlotte and her son seek refuge in England and struggle to adapt to their new life.
Decades later, Charlotte's granddaughter, Laura, stumbles across Charlotte's history and persuades her to embark on a journey into her past. As Charlotte recalls the one great love of her life, she finally faces the demons that have haunted her for half a century. 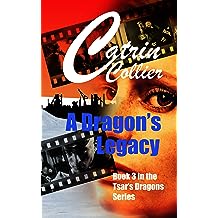 A DRAGON'S LEGACY (TSAR'S DRAGONS Book 3) May 7, 2019
by CATRIN COLLIER
( 5 )
$5.30
For those possessed of John Hughes's vision and work ethic, the town of Hughesovka on the Russian Steppe has fulfilled their wildest dreams. Colliers and ironworkers born in the slums of Merthyr, find themselves wealthy enough to buy and build palaces in Hughesovka and St Petersburg and employ the staff to run them. With John Hughes at the helm, The New Russia Company goes from strength to strength until the moment tragedy strikes and the advent of a World War and the Russian Revolution shatter and change the lives of Welsh immigrants, along with Russian aristocrats, Jews and Cossacks - forever. The fortunate ones are those who escape with their lives. 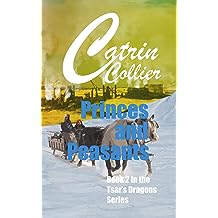 PRINCES & PEASANTS (TSAR'S DRAGONS Book 2) May 7, 2019
by CATRIN COLLIER
( 26 )
$5.30
The second Book in the Tsar's Dragons series. Welsh industrialist John Hughes has built an ironworks on the Russian Steppe - and a town bearing his name has grown around it. For people like Hughes' right-hand man, Glyn Edwards, who has found love in a new country, and Anna Parry, a Welsh orphan who is happy working in Hughesovka's hospital, the place offers a chance to build a new life - but fresh arrivals from Merthyr arrive to threaten the peace and stability of their existence. For ambitious Russians like Alexei Beletsky, John Hughes offers a chance to improve working conditions in Russia - but Alexei has to deal with prejudice when he marries a Jewess, and the couple find themselves trapped between three warring factions - Russians - Jews - and Welsh.
Read more
Other Formats: Audible Audiobook , Hardcover , Paperback , Audio CD 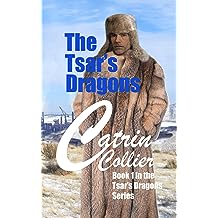 THE TSAR'S DRAGONS May 7, 2019
by CATRIN COLLIER
( 27 )
$5.30
The Tsar's Dragons is an epic historical trilogy based on the true story of John Hughes, a Merthyr born, illiterate Welshman, who founded Russia's iron industry on the Ukrainian steppe. In 1869 Tsar Alexander II invited John Hughes to build an ironworks in Russia. Not everyone welcomes the Tsar s plans. Count Nicholas Beletsky sells John his land, although he abhors industry and disowns his son, Alexei when he discovers his ambition to become an engineer. The Jews, in the shtetl, doubt that progress will halt the persecution of their race. The Cossacks lease John their primitive coal mines but John ships in experienced ironworkers and miners from Wales, some, like brother and sister Richard and Anna Parry, in the hope of escaping their past. Will they, and John's right-hand man Glyn, find the peace and riches they seek in John's visionary new town?
Read more
Other Formats: Audible Audiobook , Hardcover , Paperback , Audio CD 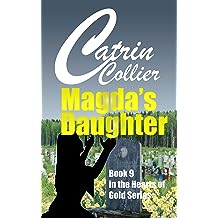 MAGDA'S DAUGHTER (HEARTS OF GOLD Book 9) May 30, 2019
by CATRIN COLLIER
( 111 )
$5.19
Stateless and destitute after the Second World War, Magda Janek built a new life for herself and her baby daughter, Helena in Pontypridd. Magda gave Helena the ambitions she once cherished for herself and at twenty-one, Magda's daughter has a university degree, a coveted teaching post, and marriage to the love of her life, Dr Ned John, to look forward to, Helena couldn't have been happier.
Until tragedy strikes and robs Helena of the only family she has ever known and everything she believes when she uncovers a bitter secret, so explosive that her mother carried it to the grave. 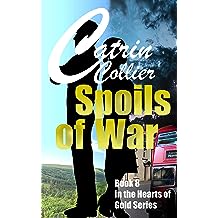 SPOILS OF WAR (HEARTS OF GOLD Book 8) May 19, 2019
by CATRIN COLLIER
( 100 )
$5.19
In 1946 soldiers set aside their uniforms and return to civilian life. But not all the reunions in Pontypridd are happy ones. Bethan John's lingering feelings for an American officer impact on her marriage. Tony Ronconi's fiancee, a German refugee, arrives in Pontypridd to find herself shunned. Alma and Charlie Raschenko receive devastating news that throws their lives into confusion - and leaves Charlie with an impossible choice. As they all try to adjust to peace, they discover that the end of war only marks the beginning of another more personal struggle.
Read more
Other Formats: Hardcover , Paperback 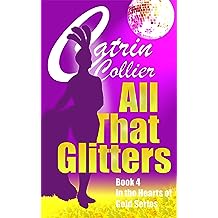 ALL THAT GLITTERS (HEARTS OF GOLD Book 4) May 13, 2019
by CATRIN COLLIER
( 86 )
$5.19
In 1939, all of Haydn Powell's dreams come true when he returns to the Town Hall in Pontypridd as the "Star" of the summer season, in the theatre where he once worked as a callboy. Drawn to Jane, a young waif lodging with his family who is burdened by poverty and haunted by a bitter secret, he tries to help her, but his childhood sweetheart, Jenny, is determined to win him back. When Jenny attempts to make Haydn jealous by flirting with his brother, hot-headed boxer Eddie, her reckless pursuit creates a dangerous tension in a town already braced for war.
Read more
Other Formats: Hardcover , Paperback 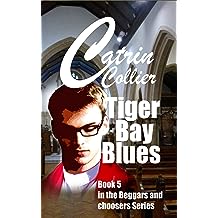 TIGER BAY BLUES: Book 5 in the Beggars & Choosers, series (Beggars and Choosers) May 7, 2019
by CATRIN COLLIER
( 75 )
$5.17
Pontypridd 1930. At eighteen Edyth is the 'plain, intelligent' one of Lloyd and Sali Evans's five daughters, until she meets curate Peter Slater. She defies her parents' to marry Peter and help him run his parish in an area of Cardiff, known as Tiger Bay. Within its borders Edyth encounters exotic cultures, unexpected warm friendships and desperate poverty. She also discovers exactly why her parents were so opposed to her marriage. Peter has a dark secret that has not only blighted his life but also hers. A secret that threatens to destroy her love and their marriage. 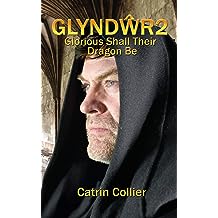 GLYNDŴR2: GLORIOUS SHALL THEIR DRAGON BE Oct 1, 2020
by CATRIN COLLIER
$5.30
The second historical novel in a meticulously researched series chronicling the life of the man behind the legend of Welsh hero, Owain Glyndŵr, who fought so valiantly for Welsh Independence.
'In our eagerness to lead the English away from our headquarters and families, we appear to have walked into a trap, boys. We cab see the enemy looking up at us. They do not fight for the love of a land, a family, friends and freedom. Driven by greed they kill to sate the bloodlust of tyrants who enslave them with silver.
'We fight for our wives, our children, our people and Hiraeth. The sense of home and belonging Wales endows at birth.
'I love and respect you too much to lie. We are trapped. But God has given us a choice. We can remain here cowed, waiting for death from starvation or an English arrow. Or, we can face our fate like men of Cymru.
'Blade in hand we can charge down this hill and attack those who would steal our lives and birth right, giving them a taste of Welsh justice delivered by Welsh courage.
'I do not command, but beg. Sell your lives dearly, and if God delivers our death this day, let us meet it like Welshman. Sword in hand, stout in heart ready to deliver to the enemy what he would deliver to us if we allowed him. No quarter.' 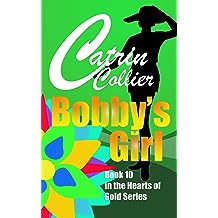 BOBBY'S GIRL (Hearts of Gold Book 10) Oct 1, 2019
by Catrin Collier
( 30 )
$4.90
America 1968. Protests against the Vietnam War, for Civil Rights, sit-ins, love-ins, happenings - youth pitted against the establishment, hoping to create a better world. Everyone has one special summer. For British students Penny and Kate, and Americans Bobby and Sandy, it was that summer on Cape Cod. Warm languid days filled with love, laughter and music. Until the night Bobby's car crashed and burst into flames, and a bitter old woman took control, changing the survivors' lives for ever. One of the four was killed, another damaged; a third disappeared never to be seen by family or friends again. Penny survived, only to be haunted for almost twenty years by a dark and dangerous secret. Then a letter arrives asking Penny to return to America to help right the wrongs of that fateful night. But has she the courage?
Read more
Other Formats: Hardcover , Paperback , MP3 CD