You've subscribed to Dragoncat! We will preorder your items within 24 hours of when they become available. When new books are released, we'll charge your default payment method for the lowest price available during the pre-order period.
Update your device or payment method, cancel individual pre-orders or your subscription at
Your Memberships & Subscriptions
There was an error. We were unable to process your subscription due to an error. Please refresh and try again. 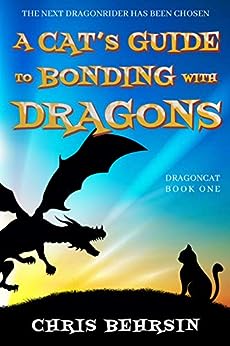 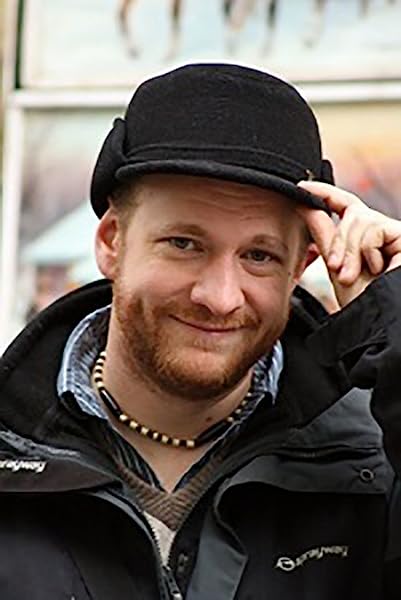 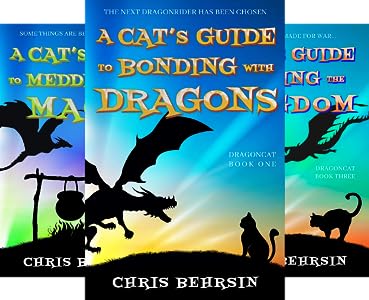 4.3 out of 5 stars
4.3 out of 5
501 global ratings
How are ratings calculated?
To calculate the overall star rating and percentage breakdown by star, we don’t use a simple average. Instead, our system considers things like how recent a review is and if the reviewer bought the item on Amazon. It also analyzes reviews to verify trustworthiness.
Top reviews

Julie Blaskie
5.0 out of 5 stars a cat as a dragon rider???
Reviewed in the United States on December 28, 2020
Verified Purchase
Wow! I loved this story! It was fun to see a cat have so many adventures! Can Ben and Salanraja defeat an evil wizard?

The writing in this story made it fun to read! The author caught the cat's point of view and thoughts very well! (We cat owners KNOW our kitties can be snarky IF only they could talk!) The characters are well developed through Ben's eyes... and the world building allowed us to see everything in our minds.

The story is unusual, but Chris Berhsin makes it work. I am glad that I had discovered this author! I love unusual stories where relationships are important in the battles against evil. I love stories that emphasize teamwork. I love characters who aren't perfect but strive to become better. There is also humor along with the action and adventure! Pretty much everything I love in a story is present here!

My favorite part of the book is the relationship between Ben and Salanraja - it grows with each challenge. Too, Ben learns to become more mature in his thinking with Salanraja's help - whether he really wants to or not! That's the beauty of relationships, right?

While I was given an ARC, I am freely sharing my opinion. I purchased a copy of this book as well to support this author. I can't wait to read the NEXT story in this series! MORE, Chris, please!!! Grab this story - you will be glad that you did!
Read more
25 people found this helpful
Helpful
Report abuse

Lenora G.
5.0 out of 5 stars For teens of any age!
Reviewed in the United States on January 14, 2021
Verified Purchase
Ben is a very happy, spoiled, and well-fed cat living in the south of Wales—until he’s not. Between one bite and the next, he’s transported to another world, and is in the clutches of an evil mage. In the matter of seconds, Ben went from being loved, spoiled, and happy to being confused, hungry, and running for his life! The mage doesn’t like him, he has to catch foul tasting rats to eat, and then he escapes.

Somehow, he manages to find a castle where there are people, but they don’t understand him, and don’t think he’s, well, the cat’s meow (no apologies on that one), and don’t feed him. Until he meets and bonds with a dragon.

As a dragon-rider in training, he and his dragon must work to be accepted and to join the league of fighters to fight and eliminate the evil mages of this world.

If you’re looking for a fun read, no sex, no foul language, limited violence, and a lot of humor, give this a try. Great fun.
Read more
23 people found this helpful
Helpful
Report abuse

Elysia Palmer
5.0 out of 5 stars Oh God is it CUTE
Reviewed in the United States on January 6, 2021
Verified Purchase
I'd like to start off by saying I received a free digital copy of this book (but purchased a paper copy because it was just that good!) and am voluntarily leaving a review because this book is awesome. Being an animal lover let me say, this book is awesome :).
I always felt dragons are very feline type creatures, to pair one with a cat, and an egocentric Bangel at that, was a purr-fect choice! Chris does a great job at getting in to the mind of this poor little kitty as he struggles to adjust to a new world, a new life and new responsibilities (or just HAVING responsibilities in general). I cant wait for the next book, and to share this one with all my fellow book worms.
I tend to over share and include many spoiler so I'll end with this... BUY THIS BOOK AND SHARE IT WITH ALL!!!! You wont regret it ;)!!
Read more
15 people found this helpful
Helpful
Report abuse

Guðbjörg Þ. Gisladóttir
2.0 out of 5 stars Actually a good book, but I gave up reading this one.
Reviewed in the United States on April 11, 2021
Verified Purchase
I love the cat, but...
do not like the peoples (most human characters) attitude.
...am not sure I will keep on reading this book.
but that is just be. It is funny and the poor cat is the "I" in the book. Horrible things happen to the cat and that made me stop reading.
What I read before I gave up... was great storytelling and "tight" writing. Just too much "prejudice" toward our friendly cat.
Read more
12 people found this helpful
Helpful
Report abuse

Kindle Customer
5.0 out of 5 stars Cats and dragons! A purrrrfect combination.
Reviewed in the United States on December 29, 2020
Verified Purchase
What a joy trailing along behind Ben during his amazing adventure; watching this kitty, stumble through from one disaster to another, always dealing with incessant hunger. Poor kitty, a real trial for new found friends, realizing he is completely ignorant, and yet he's arrogance purrrsonified claiming awesome ancestry. Great adventure story filled with cool magic - some very dark indeed. Great characters, but none better thaniracible Be, and the amazing Dragon - rats! I've forgotten how to spell her name! So sorry! Read the book, you won't be disappointed!
Read more
7 people found this helpful
Helpful
Report abuse

KT
1.0 out of 5 stars Its a no from me
Reviewed in the United States on May 19, 2021
Verified Purchase
I think this must be the authors first book, it was quite juvenile. I got about 36% through and called it quits. Its about a cat who gets super!Jones t a magical world by an evil warlock, escapes and in doing so finds himself n the company of a dragon who wants to bond w him as her rider to help save their world. The book likes to put emphasis on types of cats. The main character is Bengal and totally full of himself. The dragon and he both complain a lot. There just is no character that end ears you to them and that could be because there jut isn't any depth.
Read more
6 people found this helpful
Helpful
Report abuse

Katz
5.0 out of 5 stars Great Cat's Truly Awesome But Bogus Adventure Action Fantasy
Reviewed in the United States on March 4, 2021
Verified Purchase
This is a thoroughly delightful fantasy book & series [that could also go into fable category] that is an all-around enjoyable read. It's easy to share, even reading it to small children. The tale is told through the main character, a cat, but not just any kind of cat, a bengal. If you have been around cats, much their nature, especially the males, especially the purebreds, they are very self-absorbed in their own creature comforts & selves. Thus starts the awakening of Ben aka Bengie aka Dragoncat, Mr. Full Of Himself spoiled brat. The B boy is forced to broaden his horizons & become more of a whole creature. [this is not done without much bitching & pain] while narrowly holding onto his fur in wild new unheard of dilemmas. Will he come out of himself & his own creature needs before he finds he has lost what he should care about? Or will his self absorbed thoughts about his food, comfort & own desires only cause him untold grief in the short run as danger is looming fast & he could lose those he will regret bitterly when they are gone? Great little twists & turns
Read more
4 people found this helpful
Helpful
Report abuse

Kathleen Matthews
5.0 out of 5 stars Entertaining story for cat and dragon lovers
Reviewed in the United States on February 16, 2021
Verified Purchase
In this story Bengal cat, Ben, is transported into another dimension by the wicked warlock, Astravar. Once Ben manages to run away from Astravar, his wanderings bring him to Dragonsbond Academy and the dragon, Salanraja. Ben meets up with quite a few scary adventures on his way to become a full fledged dragon rider. This book is fast paced and fun, and I appreciated that there was no cursing, excessive violence, or sexual scenes. I would highly recommend this book and am looking forward to reading the next book in the series.
Read more
4 people found this helpful
Helpful
Report abuse
See all reviews

Mayhem
5.0 out of 5 stars Enjoyable and very entertaining
Reviewed in the United Kingdom on June 5, 2021
Verified Purchase
As previous readers have said I think this was aimed for young adult readers as opposed to near 40-year olds like myself.
Despite that there are always times when people who want to read something light-hearted, enjoyable and entertaining. If you want to show off your literary credentials then bugger off and read Dostoevsky or something; you'd be right out of place at one of my BBQ's.
I dislike saying that an author has been influenced by other writers as that comes with a vague accusation of stealing and I don't think that's the case here. It's hard to think of a single work in the past 30 years where dragons do not speak mind-to-mind.
I would describe this book as a mix of Westall (Cats of Seroster especially), McCaffrey (Dragonriders of Pern) with a pinch of Pratchett (where to begin?) and Holt (Overtime, Paint your Dragon, Snow White and the Seven Samurai...). Might also be a bit of Tailchaser in "Bengie" as well!😁
Read more
One person found this helpful
Report abuse

Mrs L Brill
3.0 out of 5 stars Boring
Reviewed in the United Kingdom on June 11, 2021
Verified Purchase
Not as good as portrayed, mix up of all dragon fantasy books with a cat, not really amusing , in place of human interaction.
Read more
Report abuse

Pat
2.0 out of 5 stars A book I didn't finish
Reviewed in the United Kingdom on June 27, 2021
Verified Purchase
It's not often that I fail to finish a book. Usually I plod on grimly to the end even after I acknowledge that a story isn't to my taste.
The title had such promise.
Read more
Report abuse